Enough paint passed through my hands this summer that I can clearly say that I spent the summer at painting camp.Â  I should call it “boot camp,” because all that I learned about painting this summer left me with one very sobering truth — which I’ll get to later; but it has a lot to do with Adam and Eve and the Tree of Life.Â  My camp session all started when I was just itching to throw some of that white paint on the cabin walls while the boys were busy with the frogs. But I had a few obstacles. The ceilings were sad and dreary, dingy yellow, covered in water spots and holes. The first lesson is to paint the ceilings first. 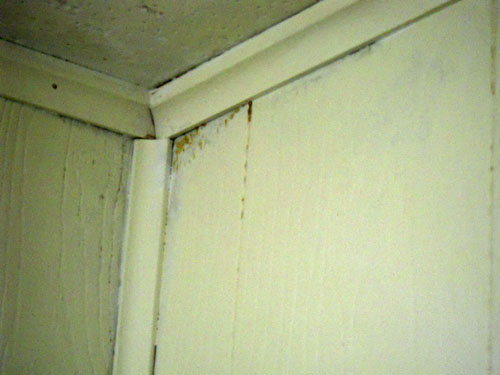 One of my neighbors at the lake is a professional painter. So, I asked him to stop by, take a look at the ceilings, and give me a quote “just for the ceilings.” He arrives, looks up and around, and agrees, that the ceilings do need lots of help, but he’s not interested in painting while he’s on vacation.

And it gets worse: He’s serious. 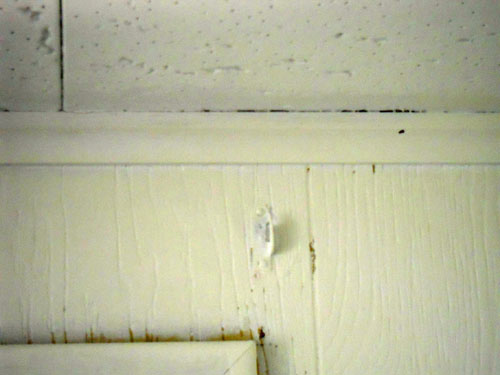 So, he starts coaching me – explaining what I need to do, and how to do it. Lots of talk about “caulking, caulk guns, thick rollers, splattering, you can do it, filling holes, brushing it into the grooves, and three coats.”

He gave me work to do than I didn’t even know I had before he arrived. I began to call him my camp counselor. Still, he kept saying, “You can do this.”

Mind you; this is just on the heels of the deck project we just finished. But, my husband was back at work, and i was looking for a challenge. — you know, a “project.”

Looking back now, if I had known how difficult the job would have been, I wouldn’t have started. Even though my camp counselor often shook his head and said to me directly, “This is a BIG job.” And, “This is HARD WORK.” Warning signs I should have heeded. I think I was so tired of looking at water-stained ceilings every night when I laid in bed when I opened my copy of Firefly Summer, (read about the book I highly recommend here), that I was ready to do anything to improve the conditions. And who better to get this job done than me?

So, I put Maeve aside, I set to work with my caulking gun. The stuff spewed out everywhere, because I didn’t learn until a week later than you need to release the thing after you squeeze it. Up on the ladder, caulking the cracks between the ceiling and the quarter round, I felt like Lucy and Ethel in the chocolate factory trying to use up the caulk that dripped on the floor after each squirt before the drips dried to a cement. I learned, by experience, that a wet finger works better than a t-shirt to smooth out the line.

Once the ceilings were done, I had to caulk the vertical lines on the paneling. This truly seemed like a wasted effort; but my camp counselor assured me this was critical. Whenever I saw him walking by, I’d call him in to check my work. Soon, I got the drift; caulking the lines was very much like getting rid of the gaps people’s teeth. No one likes to look at dark lines.

I could see the boys clearly from every spot in the house while I worked. When I got too hot, I jumped into my bathing suit and challenged one of the boys to a race. I’m an excellent swimmer; but I let them win. At the end of every day, I had some form of white stuff attached to my arms, legs and toes.

Three tubes of caulk later, I was still days away from being done, and miles away from that dream of picking up a paintbrush and hittin’ the walls. Every morning, I’d figure out which sections of the room I’d work on, and see myself farther ahead than what I actually achieved. I felt like I was getting nowhere; this was a job that I just couldn’t seem to conquer.

Now, I could clearly see why my camp counselor didn’t want to do this job. Truly, as my son said, “He didn’t want to have white fingers like you, Mom.”

The priming involved using a brush to work the paint into each and every groove of the paneling. Slow and tedious work. There were endless delays of running out of caulk, primer, fat rollers – and time-wasted trips to the paint store. Some days, I just skipped yoga; other days I forced myself into to it. Stretching out my back made it easier to stand on the ladder for hours the next day.

One morning, I was fed up with the house being such a mess, so I decided I would finish the job by bedtime. I woke up at 6:30; and carefully laid out the drop cloths, and figured I would have at least three hours of painting done before the kids even stirred. 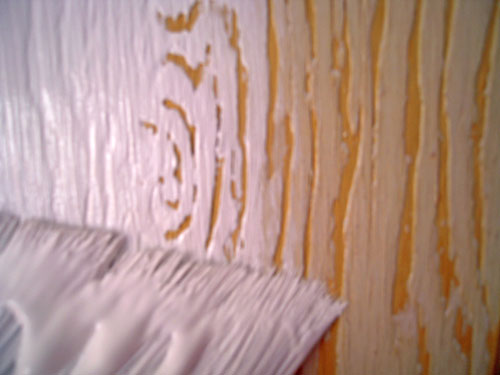 But of course I dropped something heavy, and woke everyone up. Soon, the kids were traipsing through the drop cloths, mucking everything up. They did learn their lesson from last time, and stayed out of the paint. Still, I was determined, and started rolling. Paint drips fell where there was no drop cloth, furniture was in the way, and I’d step into a drop of spilled paint on the drop cloth and soon I’d have little white footprints across the floor. My two feet were worse than the 8 feet of my boys.

Of course, my camp counselor dropped by to see me in this whole mess of disorganization. He was polite enough not to say it, but I could tell he disapproved of my “lack of planning” and “disorganization.” All he said was, while looking at the paint puddles was, “I thought you were coming down to borrow my drop cloths?”

“Ammonia works great at cleaning up latex drips,” I said. Still, I noticed that I ceased all painting while he was there.Â  I found myself waiting until he was safely out of view before I dropped my roller into the pan and started covering the walls.Â  I’m still not sure why I did this, as clearly he could have taught me a few things about technique.Â  Probably, “Information overload.”

For lunch, I pulled the last bottle of root beer out of the fridge, stuck it in the freezer for awhile, and drank it with the take-and-bake-pizza my son prepared. The kids gave me that pleading look when I poured that frosty root beer, with the fizz spewing out, and I simply said, “THIS is my reward. Hands off.”

By the end of the day, the walls were creamy white, smooth as silk, with no gaps between the teeth. 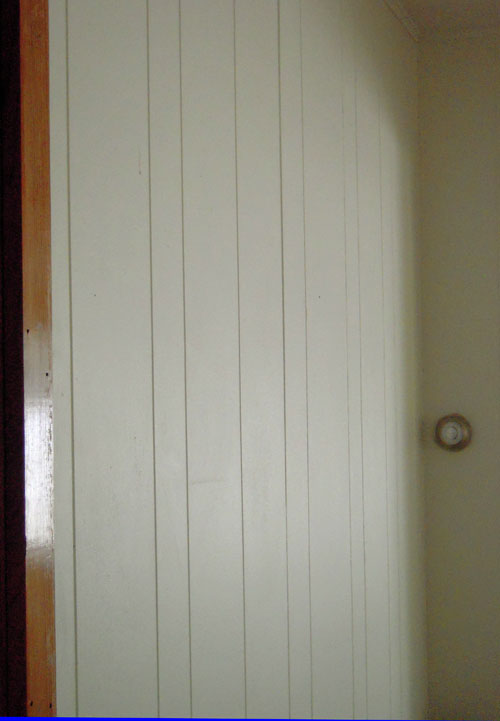 I truly was done – except for one wall. I ran out of paint, and this wall was the sacrificial lamb. I even had time to clean up all the drips before the sun went down. My painting coach was amazed – from what he saw at the end of the day, as contrasted against what he saw in the morning. He said something very nice about, “I don’t think I’ve ever met a woman so determined, who could get more done, etc.”Â  I think he was just trying to hire me. 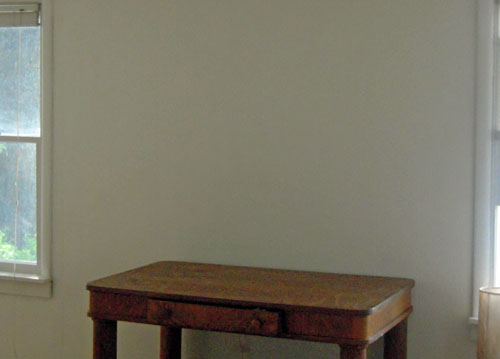 However, I learned one painful truth about an awesome new paint job.Â  Painting will transform a room, and your eyes.Â  Like the Tree of Good and Evil in the Garden of Eden, the fresh paint will make you aware ofÂ  flaws you were never saw before.Â  All of that second-hand furniture I was so tickled to have now looks, In a word, “pathetic.”Â  My camp coach’s wife, who was admiring my work, said it best, “Yes. You do need some new furniture.”

The Paper Curtain
T...
Cloud
A hot chocolate fourth
T...
Then, I Would Have Finally Had My Daughter
...
Parts are Falling Off, He Can't Stand Without Support: How Pete the Penguin Was Born
I...
Pickles Come From Cucumbers
T...
Share on FacebookShare on Twitter
Household, Laugh, Make Something, the lake house
10 comments to “Painting and the Tree of Life”