When I woke and walked outside, I found two pairs of shoes neatly positioned along the edge of the dock. These were not ours. Around the fire pit, there were a couple of damp t-shirts stretched out over the logs. A couple of those might be ours – it was hard to tell from where I stood. 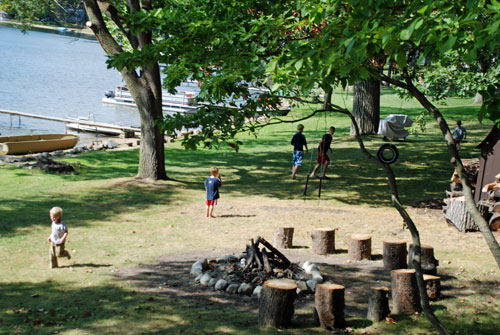 Along the steps, there were plastic cups bearing sports team’s logos (the kind guys like to keep), with just a drizzle of liquid left in the bottom. I looked further down the shoreline at the neighbor’s house. There, I could barely see the outline of someone huddled on the front step, still asleep. I figured he tried to stay up all night under the stars, trying to catch a glimpse of that Perseid Meteor Shower we all missed the night before. Or, maybe not. 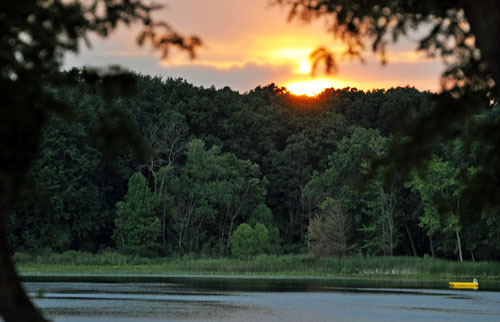 The night before, we sat in cold, damp clothes, endured mosquitoes, and full bladders while our skin collected a mountain range of goose bumps. If we were to come inside, off the water, to change into dry clothes, we would have missed something. And we were having way too much fun for that. On that night, our only comfort was a single towel someone (the smartest one of the bunch of us – she’s a great skier) had enough forethought to bring along for the ride. Soon, however, that towel was soaked, and lovingly referred to as, “our one wet towel.”

It all started when…we were taking the boat in after a 6:15 p.m. ski run; just as the quiet, patient fisherman were beginning to make their way out onto the lake. The 6:30 no-wake rule has many advantages; among them include the instant quiet that settles over the lake at dinnertime, and, more importantly, the sense of community the rule brings; we’re all off the lake by 6:30 and eating between 7 and 7:30. If you’re hungry, you know what time to show up at a friend’s place for dinner. (Just bring the barbeque sauce, please.) These are the kind of friends, neighbors, that will assure you that “your grass looks fine,” via telephone, rather than cut if for you.

This night, however, we all skipped dinner. Instead, just as another boat was making its way back home, we stopped to chat with those passengers. The conversation lingered, and we soon grew tired of holding onto each other’s boat. So we hooked (literally) ourselves to their boat, so that we could talk longer, without the chore of constantly maneuvering the boats a safe distance apart. Up on dry land, a car pulled up and another neighbor arrived for his weekend at the lake. In his words, he says, “I observed a ‘party ‘in progress’ out on the water, and feeling left-behind, I abandoned my wife and child, who were unloading the car, to join the gathering.”

We arranged for a taxi (our fishing boat, manned by our son) to collect our friend from the shore. Our friend, however, was quickly banished from jumping on-board because he had “no cooler.” The sun was blazing; it was hot, and we had already drained our cooler. We needed thirst-quenchers, and he was our lifeline; our only connection to dry land; we needed him to “do the right thing.”

Our friend was willing to accommodate us. He jumped back into the taxi, and my son jetted him back to dry land. Once there, he wisely fulfilled his husbandly duties and helped his wife unload the car. Then, he proceeded to fill a cooler, while his wife changed into her bathing suit, and collected our one and only dry towel of the evening. Once they were fully armed with provisions, my son allowed them to board the taxi, and finally escorted them to our boat party, already in progress.

The drinks quenched our thirst. Soon, nature called. I’ll leave it up to your imagination to determine what happened; but you can rest assured that some of us practice our kegels regularly and this presented no problems. Soon, many passengers ended up going for swims and sitting in wet bathing suits, just as the sun began to make its descent.

This presented a problem. That once hot and blazing sun was dropping from the sky; and so was the air temperature. Our one and only dry towel had been passed to so many people to wipe down water from arms, legs and torsos, that it was now soaked. Evaporation was out of the question at this hour. Teeth began chattering and goose bumps formed, and we huddled together closer for warmth. And that’s exactly when the stories started to come out; the intimate ones that end with, “I love you, man.” We were cold and miserable; but our hearts were warm.

We tried, unsuccessfully, to see part of the Perseid show. It was a clear, cloudless night, and the stars lit up the sky like jewels – but we were unsuccessful. There was much discussion and tips shared about the next day’s planned run on the new favorite lake toy, the “Air Chair.” 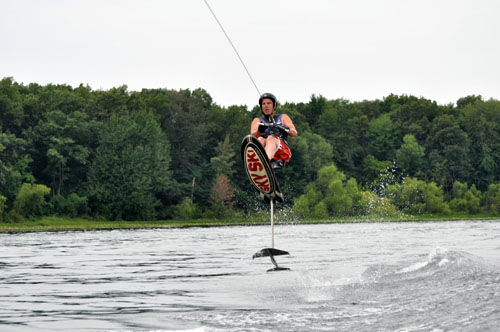 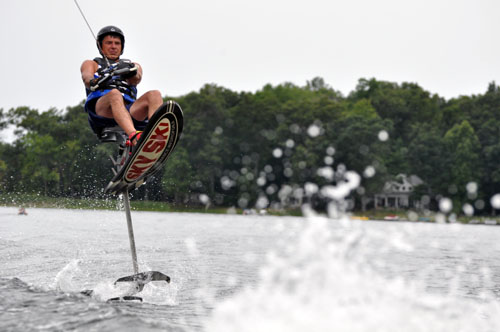 (I have no interest in trying that either… anything that requires a helmet, and a seat belt strap if off-limits.)

From shore, where the sane people were, you could probably hear peels of laughter followed by silence (that was when one person was talking) and then more laughter, and then another pause. This went on for hours, like a circle.

Between dips into the lake, we heard about one mom’s attempt to stifle her own giggles when she called her teen, “who should have been home by now.” Her daughter whispered into the phone, “I’m kind of busy right now… I’m toilet papering.”

When a couple of guys were caught skipping their own dips into the lake, they were ceremoniously, with much chanting, shoved straight into the water to take their cold medicine. The same episode was intercepted when one of our quick-thinking crewmates realized the would-be-soaked-victim was carrying his cell phone, wallet and sunglasses, in his pockets. Items that would have been forever lost in the pitch black vastness of the water.

Someone’s I-pod gave us the perfect soundtrack; everything from Robert Cray, to Eric Clapton, U2, B.B. King, Amy Winehouse and Celine Dion. Wait a second… Celine Dion?? How did that get in here? After we thoroughly harassed the owner of that I-Pod, other mysteries began to fall into place. No wonder he didn’t like to run with his I-Pod. He couldn’t run slow enough to match the beat of “Because you Loved Me.” (Come on, now. You know we love you or we wouldn’t have said anything.)

When we could take it no longer, we decided to move to shore, dock the boats, put on some warm dry clothes and build a fire. The conversation shifted to our early morning runs, or our lack of runs, and then to yoga. I guided someone in his first ever Half Moon Pose. (Seemed appropriate with the moon up there and all.) Later, he must have thought I possessed a strength I did not possess, because he asked me to “spot him.” I held his hands, as he leaned back over the porch, and landed, headfirst on the rocks. Surprisingly, not a drop was spilled in the process. “I thought you were going to spot me?” was all he could say.

Then, more guests came to join the party… of the amphibian variety. 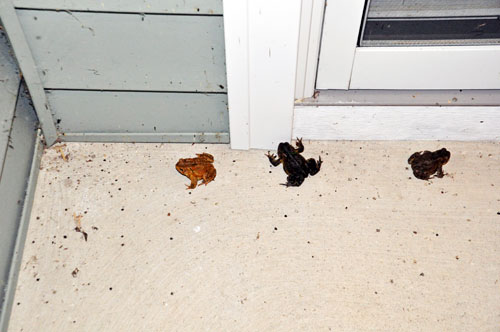 Then, we got out the Potato Launcher; but it failed to launch. This was a huge disappointment; even though attempts were made to resurrect the contraption. 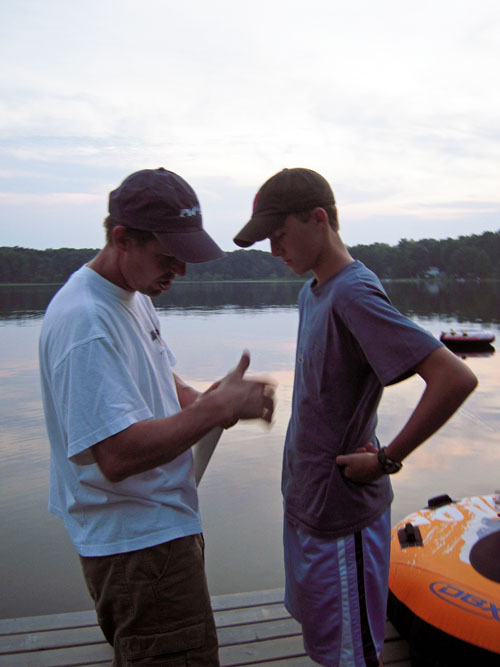 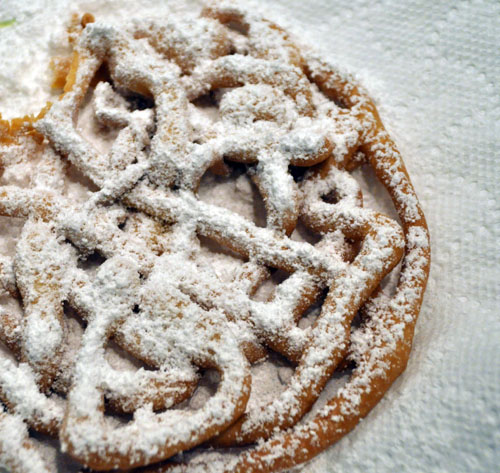 Then, Bambi (her real name) made us funnel cakes, and our bellies were full and happy, while we licked the powdered sugar off our fingers. 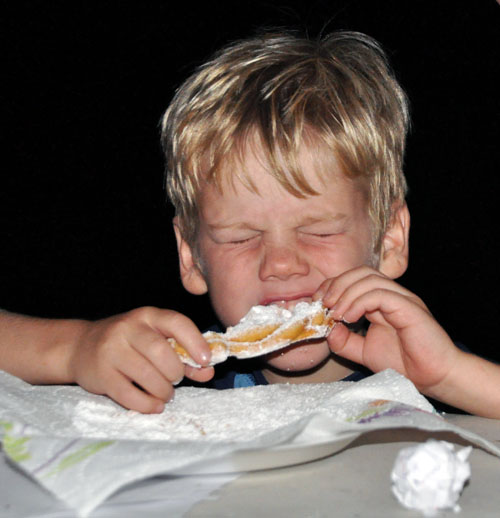 Happily, we crawled into our beds to sleep everything off… well at least some of us did.

So, there, finally, is the long awaited story… and yes, you’re not imagining it…I did combine some of the nights.

Gives Beleaguered A Whole New Meaning
F...
I've been waiting all fall for this moment...
T...
Rosie needs a pair of ice skates
T...
Three hundred and six
O...
Plastic Bliss
T...
The Tree Where I Wrote the Hugh Blair Award Paper
T...
Share on FacebookShare on Twitter
Laugh, the lake house
One comment to “One Wet Towel”