You thought you were done. You’ve made zucchini bread, zucchini fritters, you’ve even cooked them as boats. You’re to the point now, almost October, that if any more zucchini comes your way, you’re ready to sneak it onto someone else’s back doorstep, and pretend you never saw it. Because, you’re tired of zucchini. 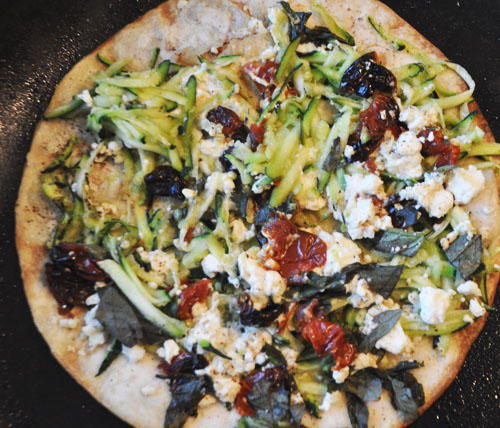 Not so fast! Oven roasted tomatoes and basil can take zucchini to a whole new level. An incredible level.

Take your zucchini and quickly shred it with a cheese grater — it will take just a few seconds.

Toss it with someÂ re-hydratedÂ sun-driedÂ tomatoes, or some oven roasted tomatoes. OK — I know that might be a show stopper for you — but don’t let that happen. Here are two quick options:

Next, chop up some basil — don’t make pesto. Just keep the basil plain and add it to the zucchini, along with some cheese of your choice. Something like Feta and Â Parmeasean. Add some salt and pepper.

You can start eating this right now — as a salad.

Or you can throw a tortilla shell on to the hot skillet you used for your tomatoes, and let the tortilla get nice and crispy…. and wow. This is good.

Getting Kids to Eat Healthy
K...
What Spring Means To Me
W...
College Prep Worry Insurance: Getting An Internship
I...
Sweet and Quaint
T...
A Comfort Food I Bet You've Been Missing
I...
I went to the country to pick blueberries
a...
Share on FacebookShare on Twitter
Eat, Life