My Junior year of high school was my best. An outsider would probably attribute my joy to the fact that I had one of the leading roles in our high school musical, but there were other factors. Things like getting my driver’s license. Geometry was over and done with, leaving me to pursue funner stuff, Algebra and Trigonometry. At that point, I knew which high school teachers I could count on to let us get away with goofing off, and which ones to avoid. I was settled now in my role as first chair, as the director gave me the role of last-minute tunings, on stage, before he appeared at our band concerts. Now, the hallways at school were filled with younger faces who were much more naive about things; the way I was two years earlier. In a word, I developed a sense of power and confidence — in high school — of all places.

Perhaps this was what gave me the confidence needed to not only read for the script for the lead in the Spring of my Junior Year, but also to sing. Alone. Sing. All by myself in front of peers and classmates — and soon — their parents and families. Leads were to go to the seniors, as a courtesy. But, by gosh, they couldn’t let me slip away, so they gave it to me as a Junior. I had talent.

As the Junior year left, my senior year brought the opportunity for the senior class play. Auditions took place in the fall. Of course, with the confidence I had built up by this point, my role, was in the bag. Except, that I didn’t make it. I didn’t even make the choir. As I scanned the list, posted in the hallway bulletin board, I looked for clues… did everyone who starred in the musical last year get rejected? No, not everyone. I tried to make some kind of logical connection to understand why they didn’t choose me. I must have preformed horribly last year. I did something terribly wrong. Shame and embarrassment descended my shoulders, and every inch of breathing space around me. Luckily, the final school bell had already rang for the day, and I was alone in the hallway. I took off, before anyone had a chance to see me. I needed to get to my own room, with the door locked, fast.

Except, my pesky younger brother had already seen me, and he was high-tailing it behind me. Couldn’t wait, I figured, to tease me on this one. Because I had a head start, I made it home before he had the chance to pelt me with taunts about not making it in the play. When I got home, he worked his way around to look me in the eye. Here it comes, I thought.

“Susie,” he said. “I’ve been looking all over for you. I saw you didn’t make it and I was trying to find you in the halls at school to see if you were OK.”

The ache in my heart to reach the privacy and safety of my own room soon opened and gave way as I considered that maybe I could wallow in self-pity out in the open, in every room of the house. I forgot about the play. Our parents were recently divorced, and while I zoned in denial, my brother realized, before me, that we needed a new set of operating rules. One that didn’t include our favorite pastime, fighting like cats and dogs. We may only have each other, as uncertainty about the future loomed. This was the olive branch. Like mine, his eyes had tears; hurt that I didn’t get a part. More than ever did I want that part in the play; just give me that part because I can’t bear to see him suffer. I don’t remember feeling so much hopeless sadness since Mom gave our new kitty away one day while we were at school.

My senior year wasn’t much fun. The sense of confidence I built in my Junior year got knocked down in a series of doubts centralized by one single question that was never answered, “Why not me.” Maybe I should have asked, and learned. Looking back, I know, as a parent, I would have found out. Harmless miscommunication can do great damage, and someone should step in and help clear the air.

But, I did have a renewed sense of family. From that point on, I walked through the hallways at school knowing I had an ally I never new existed before. My brother. We’re still close like that. 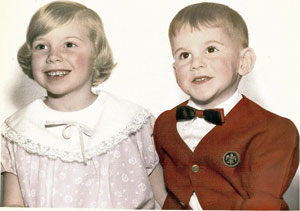 I think its only appropriate that I write about this today, as Brook on American Idol, I learned has been voted off the show. I have never watched American Idol, but friends, neighbors, and complete strangers have been stopping me on the street to say, “You remind me of Brook.” I hear she has long hair, I say. “Still, you look like her,” they say.

Leaving Las Vegas
Just Letting It All Unfold On Its Own
...
On Loving Pi
"...
Twenty Fourteen
W...
Because That's Not How Grandma Did It
M...
For Our Next Nature Lesson
F...
Share on FacebookShare on Twitter
Life, memories, sunday scribblings, Tears
22 comments to “One hit wonder”