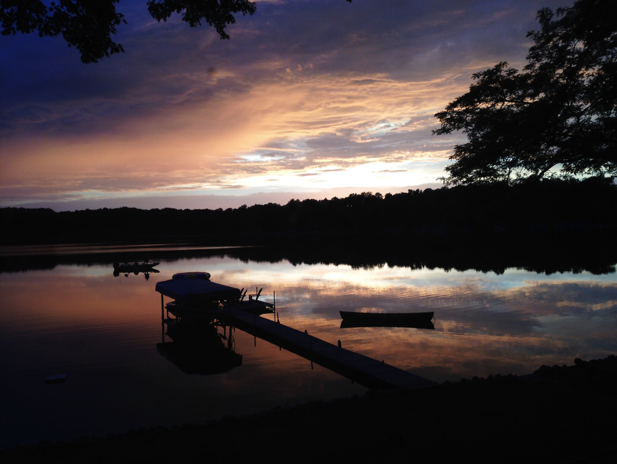 But putting into this perspective helps me see that the next time the World Cup game is played, all six of us may not be together. The boys don’t say this, but I wonder if they think this, as they all joined in a little moan when the older boys were called in to work last night for today. They are working part-time, on-call, for a gentlemen who cleans decks and houses around the lake. Each morning, my son calls in to find his “mission” for the day and they send him, and sometimes his brother with him, to some far and away cottage on a different lake, where he gets to work, coming home later wearing the grime from another cottage on his clothes. 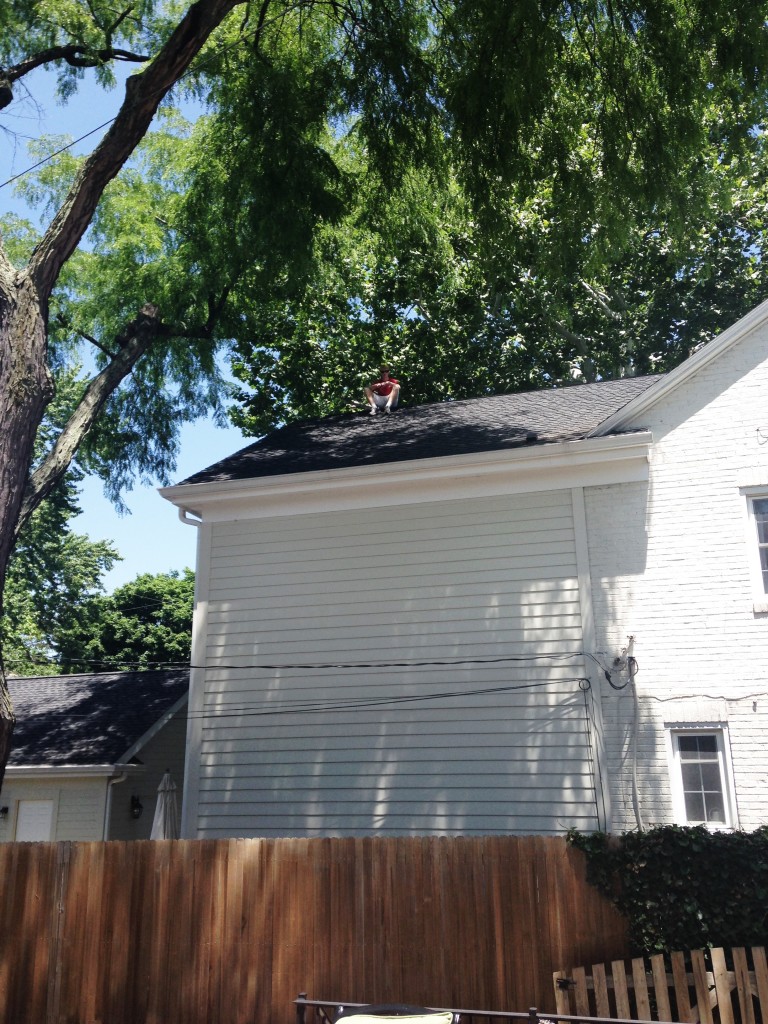 On Monday, our second oldest son, said he had some downtime with the boss, and he was thinking he would just throw it out there, to see what the boss’s take on soccer was — if there was a mutual respect for the game, he might have a shot at asking in advance for some time off. Â  Yes, the boss did watch the game yesterday, but when he used the word, “random kick and he made a goal in the last 20 seconds of the game,” our son’s hopes were dashed. Â He said, “He’s only the best soccer player in the world… it was anything but a random kick that tied that game… it was a kick that he had practiced for his entire life.”

Yesterday there was no work…. But not today. The call came last night: be there at 8, was the message. Â Our hopes kind of deflated… we had made so many plans for this game. Â The little boys had cleaned the screened porch, and scrubbed down the furniture. 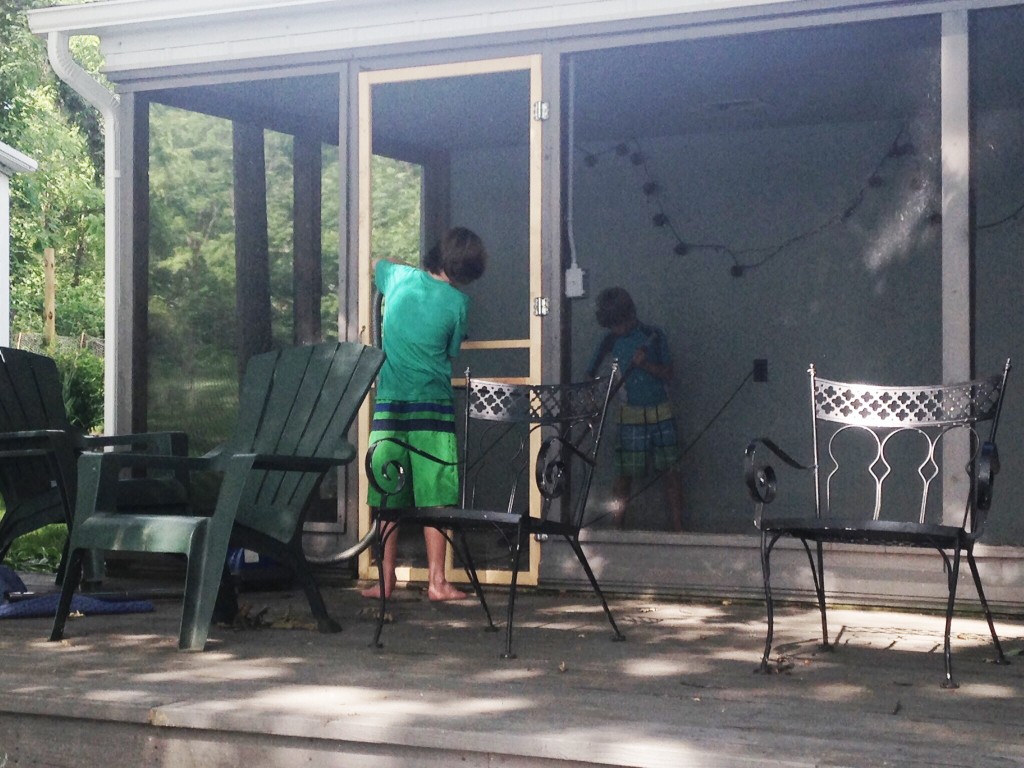 Â They insisted on Chex Mix (from the store-bought bag, because mom doesn’t include bagel chips in her home-made version), Doughnuts from Tom’s, 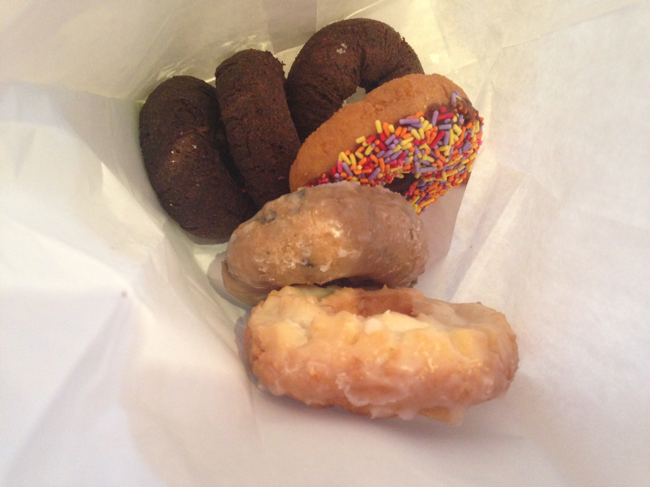 and we’ll tap this rootbeer keg that we bought from Amazon Prime. 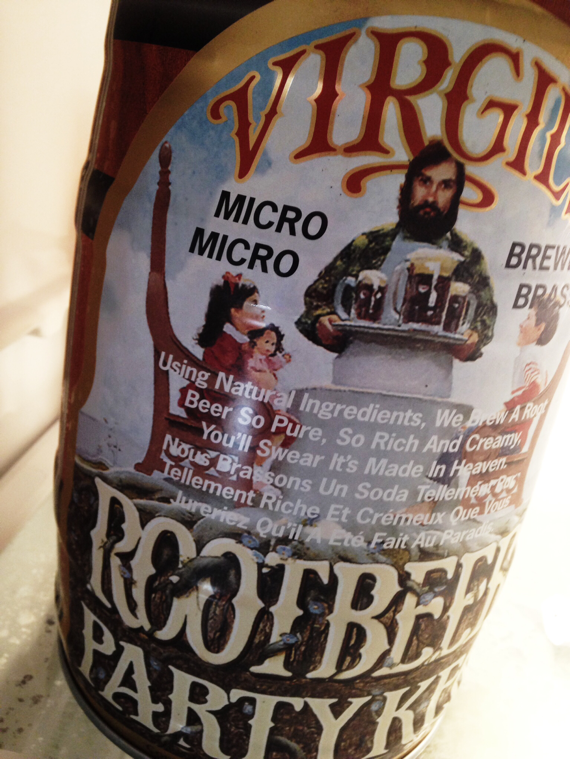 Two will be missing out on the dips in the lake for the soccer goals, like we did last Sunday, when Rosie led the way. 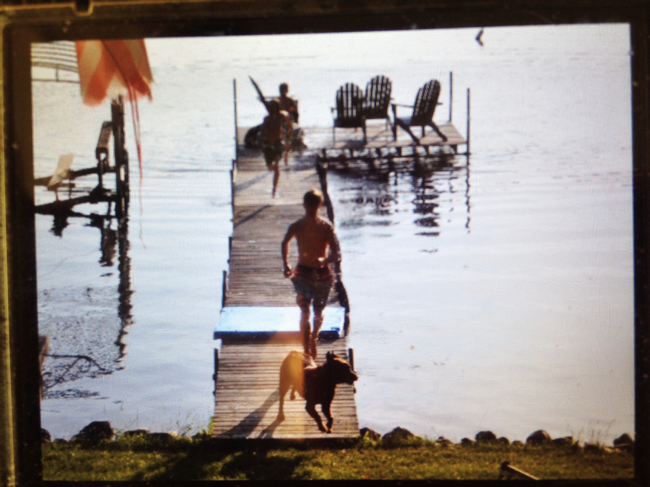 So early this morning, while the sun was just burning off the fog from the lake, waking again to my collage of varied alarms, 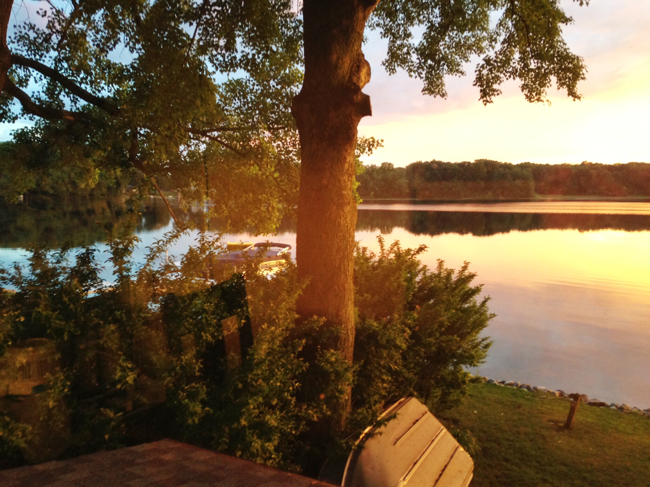 I packed lunches (two pork burritos from last night’s dinner, two PB&J sandwiches for the younger one, a bag of Chex mix, and orange slices) into a cooler, while the little boys pondered the idea of using my phone to tape the game so they could watch it later. (No Tivo here.)

So, off they went. We’re hoping the job ends by 12:30, just like it did yesterday so they won’t miss much of the game. Meanwhile, the little boys are re-arranging the furniture 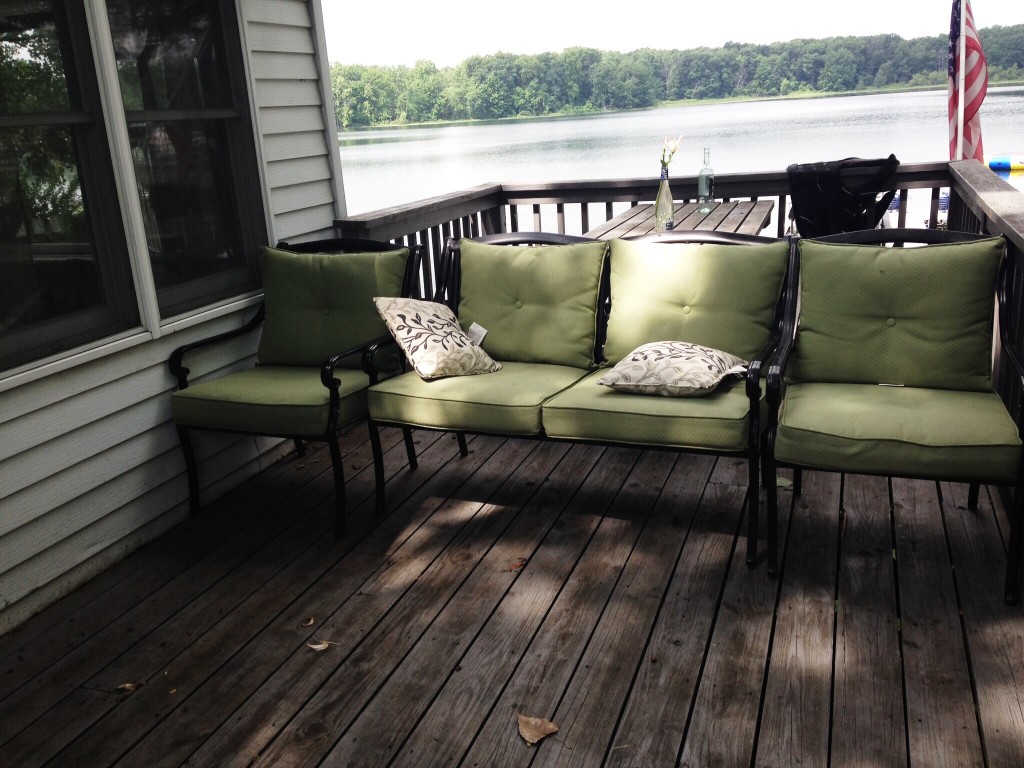 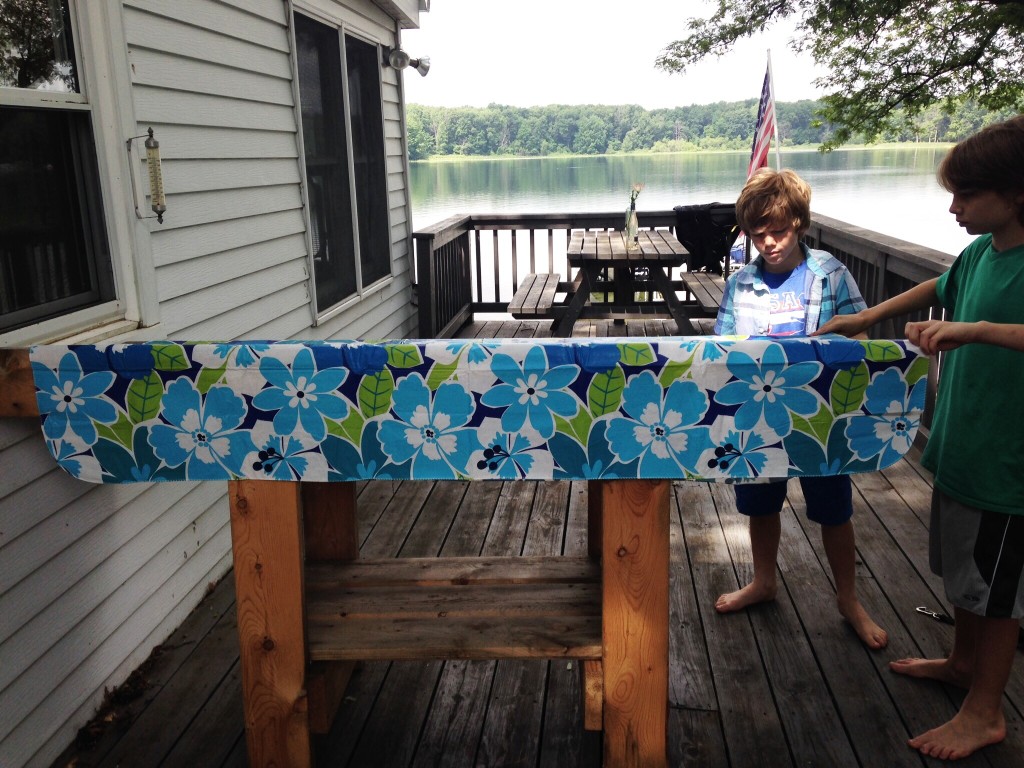 (Dad is working inside the cottage, so they are running wires and cables from inside the house to the outside deck), 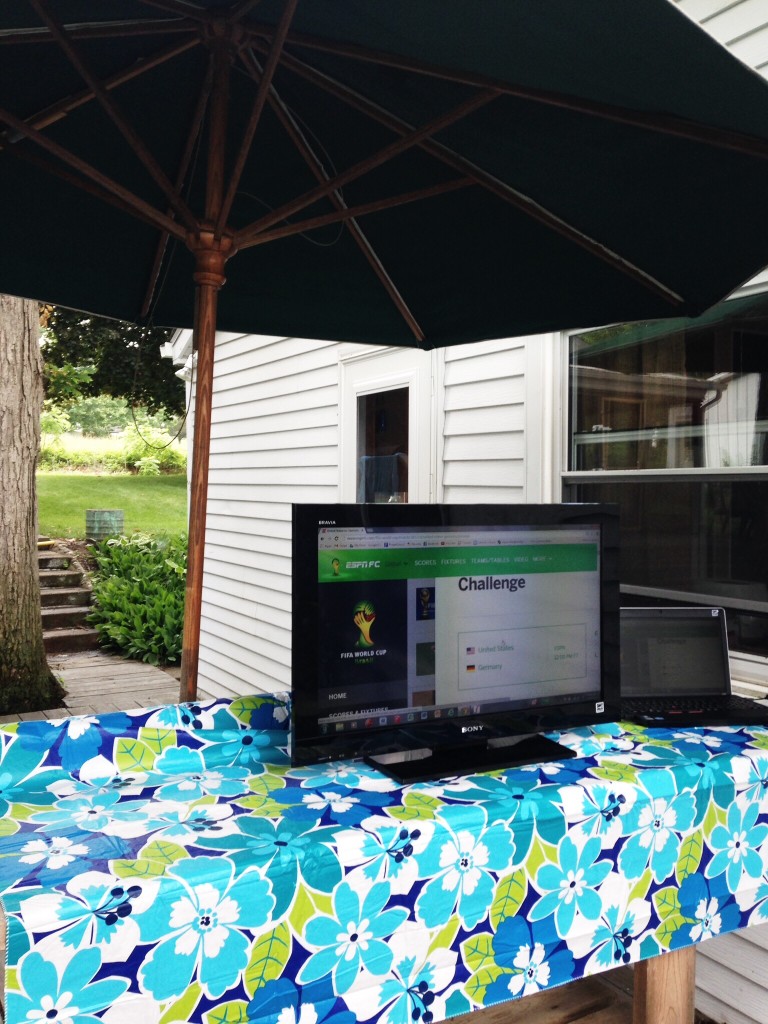 while I am working to repair the limited internet that we have. And, so far, we have none. Â The technician from the support center has just taken control of my computer, and while he works, I’m writing this. Â Without it, none of us will be watching the game…. So I’m on hold with the technician, and thinking about how we’ll laugh about this someday, saying, “Remember when we had so much trouble watching a game on TV?” 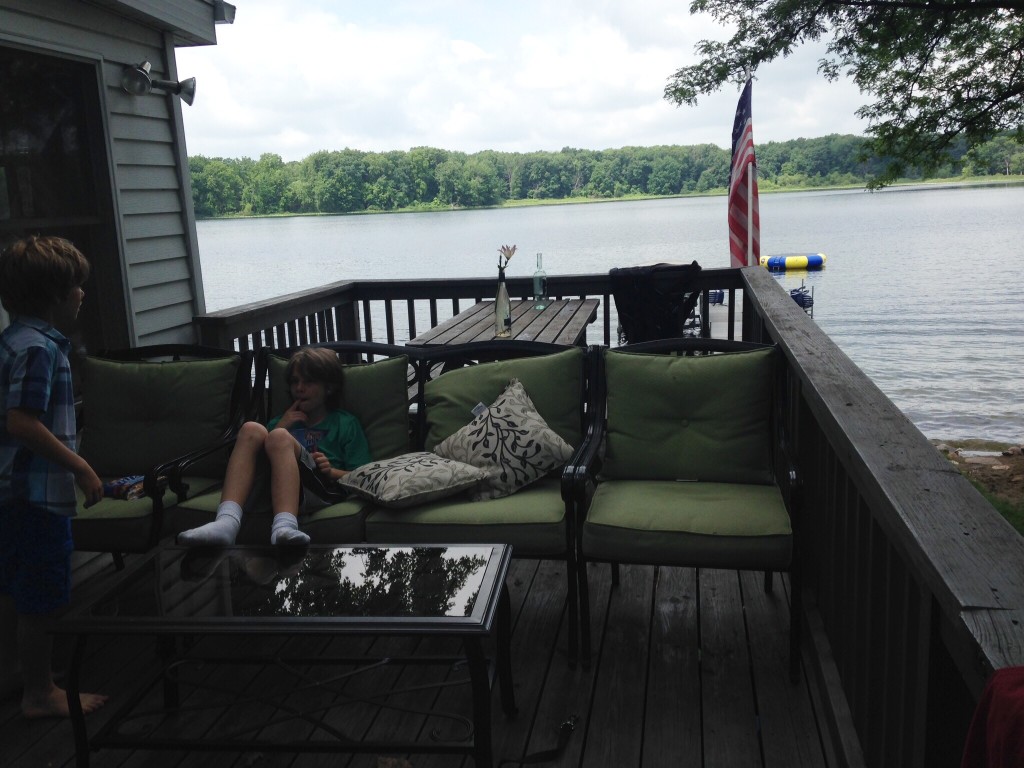 And this text just came through….”Mom, we’re almost done with our job for the day…” with more than 70 minutes left till game time. Â My text back said, “And we have live internet.”

And a few minutes later, came this text: “Never mind mom, they’re sending us to another job since we finished this one so quickly.”

Sage Wreath
I...
So, you're having a boy?
...
Dinners We Can Eat While the Kids are Away At Camp
B...
This thing with my neck
...
Will There Be Enough Wooden Clothespins?
W...
Office Supply Weapons
I...
Share on FacebookShare on Twitter
clean, Life, memories, the lake house