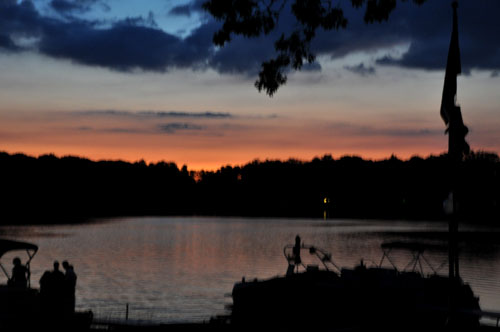 Life on the lake is condensed. We watch each other out of the corners of our eyes for hours, without even realizing we are absorbing their habits, their mannerisms, and what they like about their neighbors and what they don’t. The long days of play and toil of lake-life reduces every person down to their bare essential qualities – and these are revealed as a single pivot point when a person simply says a name. “Yeah, I know who that person is,” and immediately, a card catalogue of memories and dialogue comes tumbling before our mind’s eye.

When the winter sucks all life form from the lake, with its liquid frozen tundra, those voices and faces have disappeared. “Never again,” we think, “will this lake see life again the way the water was overflowing on the Saturday after July 4, when the sun was so hot and bright.” As we remember the people that walked across our shores, we begin to wonder if all of this was real. Their stories become legends; a character we only imagined, and exaggerated.

Nature Nick is one of our legends. He’s 15 now, and the kids go to him to see what creatures he has pulled out of the lake – which he studies before he releases them to back into the wild. 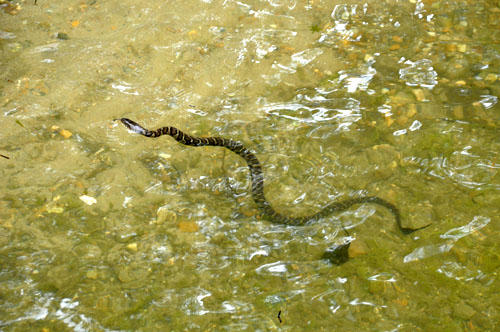 When our snake appeared for its third time along our shore, while the little boys were playing, I was ready with my camera. I snapped pictures for Nature Nick. My phone was in the other hand, and I called my husband, who was down at another legendary friend’s house on the lake, to come and take care of the snake. 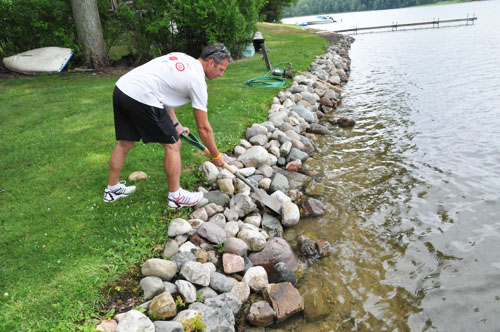 Within a couple of minutes, my husband arrived with more men. The snake, after more than 3 minutes, was still dancing around in the water, unafraid of us. When the snake dodged under the rocks along the sea wall, my husband used the shovel to push the rocks out of the way.

At the lake, the second rocks start falling off the shoreline, it doesn’t take long for the entire lake population to sit up and take notice. Boys from every lot on the east shore were soon gathered in front of our house. Despite so many pair of eyes on the water, the snake eluded us once again.

Nature Nick was invited to come and look at the scene, and to study the captured pixels of the snake on my camera. This wasn’t the first time I met the young man. He lives on the east shore too, but down around the bend, and we can’t see his house from where se sit.

Today, he wasn’t just a kid to me. I was relying on Nature Nick, for my children’s safety. For my own peace of mind when I want to jump out and swim myself. And, unexpectedly, Nature Nick put me at ease immediately when he started talking about the books he had been studying since we first told him about the snake a few weeks ago. Then, he studied the picture in my camera, without rushing, or revealing any excitement. This, I realized, was not because he was refraining, or holding back. “This snake isn’t poisonous,” he said, to my relief. “But this is a rare water snake, and I’d like to catch it to take a look at it.” He zoomed in the photo to study the shape of the snake’s head, his markings and other technical snake genre/facts. Stuff I should probably know.

I explained how the snake did not seem afraid of my children, poking his head out of the water and darting in and out around them while they clamored out to shore, and began throwing rocks at the serpent.

“Well, they do have very sharp teeth,” he explained, as he showed me a scar on the back of his hand. “This is from a water snake I caught a few years ago.”

We pondered the idea of whether the snake had a nest along the rocks in our shore, which would explain why it was so protective of the area, and so active around the kids. I realized how, in a lot of ways, Nature Nick is to the lake, what Clint Eastwood is to the West.

He looked at the rocks, tossed around the shoreline, and Nature Nick said, “You really shouldn’t have knocked all those rocks down. Now this snake may not come back here.”

He looked back at me quizzically, as if he needed an explanation. Suddenly, my zeal to rid the snake seemed wrong, smack in the face of Nature Nick’s quest for understanding and preservation. This is the snake’s lake, first and foremost. I now rembered the truth in his non-violent, kind manner. Still, the snake had to go. So, I said, “We want the snake to leave here, so that maybe he’ll go down and build a nest by your place.” That made him grin, as he looked down at the water toward his shore. “Oh, yeah. OK.” He gave me his grandparents phone number, and asked that I call him the second I see the snake again. 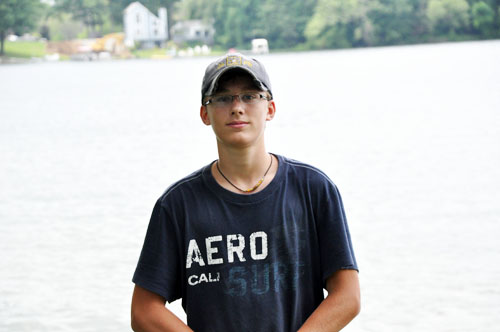 I snapped Nature Nick’s picture, because I want to remember the legendary boy from the lake, in the dead of winter, when I’ll wonder if anyone really can make sense out of this crazy, mixed up world. Nature Nick brought me great comfort that day on the shore. My boys are back to building their castles in the sand. 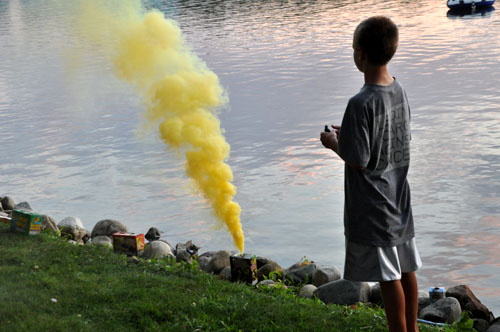 Just to be safe, we thought the area might need a few smoke bombs, just to clear the air.

Finding a Way to Make My Eyes Twinkle
I...
I'm Getting New Furniture!
T...
A Big Grand Chalkboard to Run My Life
I...
You Must Watch The Bells of St. Mary's
Y...
I Love To Feed People Who Are Really Hungry
W...
Mission for Today: L Train to Brooklyn
I...
Share on FacebookShare on Twitter
clean, Laugh, the lake house
2 comments to “Now, He Will Never Come Back.”