Last fall, we felt lucky if they scored one goal during a game. The coach told them if they practiced and worked on their drills, they’d be in the championship game by spring. We appreciated the coach’s optimism.

Today, as we pulled into the parking lot of the spring soccer tournament for our third game of the weekend, there was a mass exodus of cars pulling out. We were one of the final two teams to play the championship game. We felt like royalty being able to park so close to the fields — away from the overflow parking.

Memorial Golf tickets, given to brothers, were traded for a chance to “cheer their brother on.”

It’s been a wild weekend for the birthday boy. A formal goodbye from his elementary school on Friday, a wild birthday party afterwards, and this killer soccer tournament that was played between thunderstorms that left the field in huge puddles that splashed as they chased and moved the ball across the field.We were pinching ourselves that we were even really here. 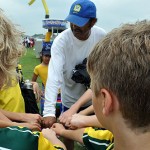 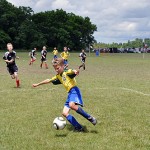 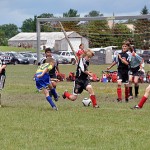 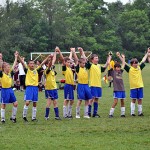 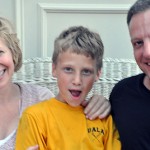 They did not win today’s championship game. But, as their coach said — it’s all about learning. “This team definitely showed some improvement this year.”

The boys, just happy to be part of the championship, didn’t have room in their hearts for sorrow over the final score. Loosing provides such a great opportunity for kids; especially when they have so much fun not winning a game.

Kickball is Our Game
W...
Burlap's Opposite Attraction
B...
What Rosie Misses
T...
It All Started Out So Well...
W...
I'll Meet You At Rendezvous
T...
Without Having All the Answers, She Made It Anyway
A...
Share on FacebookShare on Twitter
birthday, clean, Laugh, Life
2 comments to “Never Had So Much Fun Loosing”