The box is full of the stuff a daughter collects from her Mom’s house after she dies; the stuff she’ll never have the time to do anything with, yet wouldn’t dream of letting it go.

“Must do something about that stuff,” I say every day as I have walked past the box to the washing machine, for the last four years. This is followed by a pang of despair, knowing I will never find the time, nor do I want to make the time. The box overflows with black and white photos, vintage greeting cards, report cards from the 50s, and out-dated deeds to properties that have passed through the hands of my ancestors. 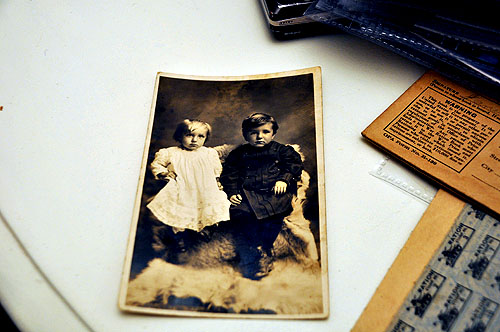 Often, I wonder, “Is this the 50 Things that experts say I should throw out to get rid of all of my emotional clutter?” Probably. But, I can’t bring myself to do it.

My dream is to collect the box and its contents into one big album, each photo protected by archival-quality photo pages (which I already have.) First, there is the issue of finding a suitable album cover that I like, of course. Sorting through these archives, I estimate, will take me weeks, or months, of focused, concentrated effort. I imagined starting the job, and people inviting me to go shopping, and I would have to say, “Sorry, I’m in the middle of a big project right now…” 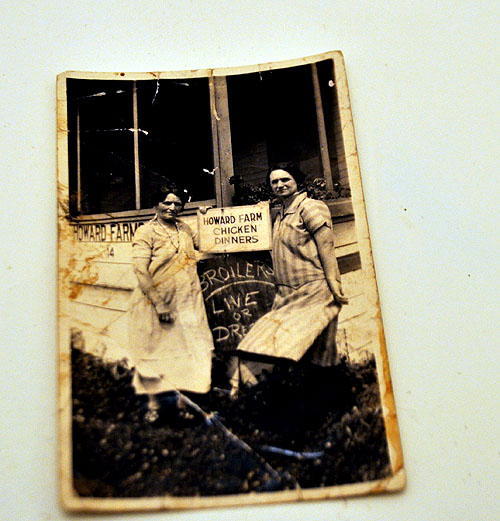 Sometimes, though, I am ingenious. Out of desperation, I turned this little project into a “job.” I offered my 11-year-old $40 to get those photos into archival photo pages – “I don’t care what order – and get them out of the box. Go! Get it done!”

Then, I realized what a simple task this really was. So, I took a chance, and offered the job to my 7 and 6-year-olds. They had quite the opposite response. They would love to earn $40 (half.) They were thrilled. So, I handed them the box, and I pulled out handfuls of photos and guided them as to what they were supposed to do. They picked up fairly quickly. They had the job done in 20-40 minutes.

How did that happen?

They were efficient. Like my friend says, “They were unattached, emotionally.”

It was nothing for them to take a stack of photos and slide them into pages. They didn’t stop to look at the faces and try to figure out who they were, or ponder about the day my parents got married – and did they ever dream what their future would really hold? 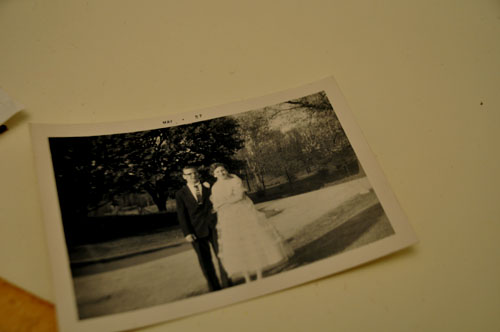 The boys even figured out that they could stack two photos together, back sides facing, and slide them into the pages – doubling their productivity.

They also called my attention to a few items I had no idea were in the box.
Like these War Ration Books. 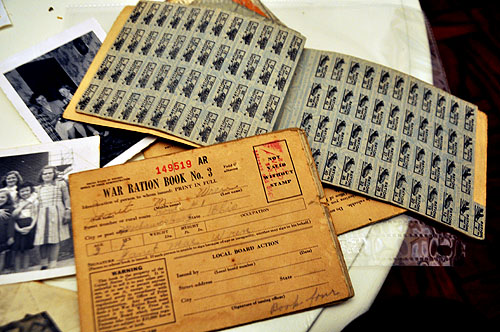 Just try explaining “War Rations”Â  to a 7 and 6-year old, while your mind is off drifting to the past, picking up threads of long, lost forgotten conversations; wondering why in the world you didn’t pay attention when she tried to get you to look at this stuff years ago.

The boys were happy to do this job for me. They surprised me with their lightening-speed, and they were pumped full of pride that I was so delighted with their stellar performance.Â  Save for a few more loose ends (need more archival pages), the box no longer waits at the bottom of my step.

Yesterday Morning's Curtains
W...
Treading the High Places of the Earth
I...
Bond. James Bond.
I...
The Bubble Wrap Theory
I...
I want to be like vintage Nancy Drew
...
Merry Christmas!
W...
clean, Life, memories, Try This
4 comments to “My Vintage Album Overflows”