It’s sad. The two older boys are gone all day, and when they finally do get home, I’m too tired to keep my eyes open. Trying to prepare/prevent the afternoon drowsies, I start gulping tea around 1:30, and I make cup after cup, trying to keep the sandman away. But, it’s to know avail. Still, it doesn’t help that there is enough going on in the house to make Mother Teresa run for cover. Yet, I’m so tired that sometimes tears fall from my eyes because I yawn so much. Once my eyes start to water, I’m just a breath away from a good hard cry about how hopelessly tired am.

I mentioned this to a neighbor, and she asked a simple logical question: “Do you take a multivitamin?” Well no, I admitted. This was my first step toward a life of beyond Rip Van Winkle.

But wait, there’s more… The people in Siberia have coped for thousands of years with their bitter cold, dark life by taking a tincture of Rhodiola. Even the Vikings used to take it. So, I began adding some drops to my morning cup of tea. 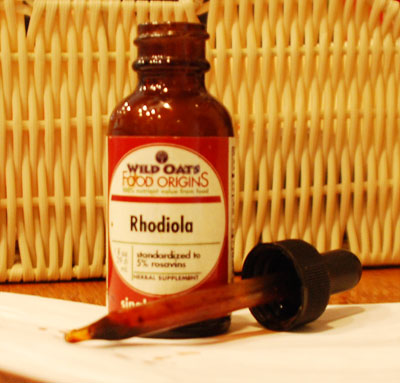 , also known as golden root, and arctic root, improves mood and improves depression and mental performance …. and, here’s the bell-ringer… reduces fatigue. It tastes awful. But, I don’t care… I’ve been through much worse. Yet, it does comes in pill form, but I like the idea of taking it like a shot.

It’s seems to be working nicely. I actually sat down to play a game of Monopoly with them after school… and I got so wrapped in the game that I forgot to loose, and ended up winning. Then, my kindergartner got mad at me. Geesh. I was just trying to have some fun.

If you want to try Rhodiola, remember to buy one that says Rhodiola Rosea only. Avoid Rhodiola Sacara, as it doesn’t work. Take it in the morning, so it doesn’t interfere with the rest you need at night, although this has never happened to me. I never have trouble falling asleep.

The Day We Carted The Albums Away to Make Room For You
T...
Senior Tag: You're It
I...
Here Comes The Sun
R...
Turn Your Favorite Tins Into Leak-Proof Planters
I...
Where Toads Are Delivered In The Afternoon
I...
Just Perfect for A Dreary Day Like Today
D...
Share on FacebookShare on Twitter
health, Life, Science
5 comments to “My Blessed Remedy for Exhaustion”