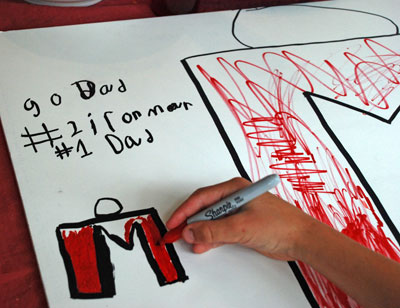 His signs are packed and ready for his voyage on Wednesday to Ironman number II to Coeur d’Alene, Idaho. I cheered, but then caught my breath, dropped a couple of tears, when I felt the gravity of what the sound of the cannon meant, as the announcer said,

“Don’t worry about them out there today… We will take care of them.”

He was referring to the thrill of watching the heap of 2,200 swimmers pile into the water, wave after wave, in a rush to the finish during my husband’s first Ironman. Where would this race take him today? Figuratively and emotionally. Later, I learned that 287 racers did not make it to the finish line. “Can you believe that sight,” he says. I still can’t. Over two thousand racers; each with their own private story to tell about why they’re here today. 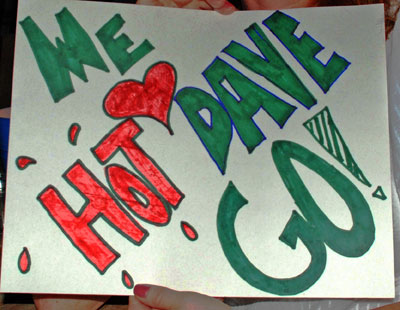 I am often asked, but I never know just how, to encapsulate into words the reasons why my husband wants to do an Ironman. It takes so much time, other women complain. I complain about this too. Training does take a lot of time. But, it’s better than a blond, I say. I know he thinks this is fun; but I, and many of you reading this, don’t. There are also his own private reasons; they come from deep places within him; memories from boyhood days long ago, yearnings for places yet to see, the conquest, stirrings to reconcile a promise that wasn’t meant to come to fruition. 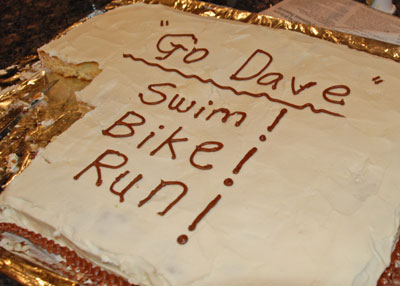 His Dad died of leukemia in his 40s, and his first Ironman was done in his honor, with the accomplished achievement of raising over $8,000 for the Leukemia Lymphoma Society. Still, the reasons go back further still. Before he died, his Father often talked about the trip out west they would take together; the trip that never happened; yet, his Ironman bike ride was in close proximity to those very same mountains they talked about exploring on their own. During the run, towards the end of the race, he said he felt his Dad’s presence right there; and even my Mom talked to him, telling him he was almost there; he had come this far already, he could do it. 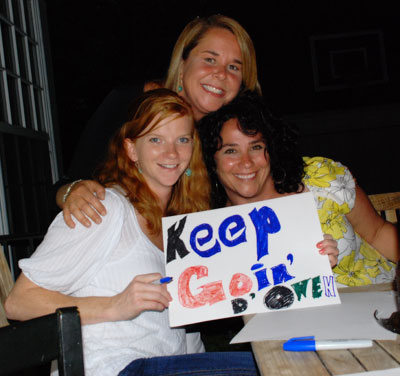 Unlike the last video, this one shows four thousand volunteers who spray sunscreen and peel wetsuits off the swimmers. You can hear our then 8-year-old, directing Dad to his bike, after we “threw him off” by showing up in the transition area. (Flustered from seeing us there, he couldn’t find his bike for a second.) 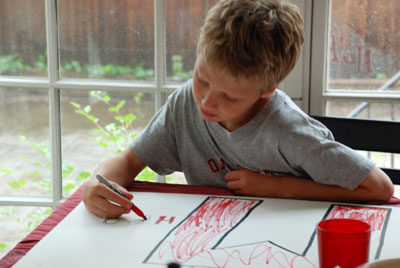 No, I can’t speak for him about why he does what he does. His reasons are vast and too mysterious — and so “un female.” But, I can understand why so many of your feel compelled to ask, as I still wonder the same thing sometimes.

Won't you be my valentine?
F...
This Quick Bread/ToastActually Helps You Loose Weight - and It's Delicious
T...
Struggling Through The Comets
I...
Popovers
T...
Work at the Lake House
...
Grow and Garden and Share
...
Share on FacebookShare on Twitter
Life, races
15 comments to “Musings that stir a wild man’s heart”