He still couldn’t walk, and this was after Epsom Salts soaks, and after using tweezers to pull out shards of pencil from the bottom of his foot. The pencil was broken and frayed, from the impact of gravity as he jumped on the sofa while playing Wii Ski. Still, there was pain. (A left-over from the art escapadesÂ  that happened earlier in the afternoon.)

Off to urgent care we went. Once there, I had to carry him from the car to the waiting room, and left him in the chair closest to the door, while I filled out the intake forms. Meanwhile, a nurse put him into a wheel cheer (adult-sized) while I was busy checking him in. He sat in the chair and sulked.

Once we were called in, the doc immediately shot his tender foot with Novocaine, (Yes, my head is still throbbing from those screams) and went to work. One quick incision, and a little squeeze, and nothing. He squeezed a bit more. Nothing. I began to wonder if maybe this was all for naught. I was sure there was something left in his foot — the signs were all there, a little puffiness, and little redness. The doc agreed, and we were baffled. (It was a little like watching a CSI episode. Where could the missing evidence be?!)

The doc made four quick stitches to sew his foot back up, and off we went to X-Ray. 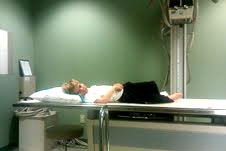 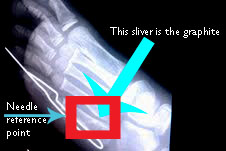 Oh my. I wondered, maybe, if they might have to go through the top of his foot to get to it. The doc laughed about that. This doctor was no pun intended, going to get to the bottom of this issue. The x-ray tech had other plans. It was getting close to her lunch hour. And after his repeated requests to take another picture, with the needle pointing to the incisions, so he could tell which direction to go into the foot, he finally had to arrange the x-ray himself. She pushed the button, and we were back in the wheel chair, to the examination room.

While there, waiting, my son confided in me that when that nurse put him in the wheel chair in the waiting room, “it was so embarrassing.” He looked like a little old man sitting there all crumpled up in his chair. Full of pride at the tender age of 7.

The doc came back in, and put some more Novocaine into that wound. (Too worn out to tell you how many screams that one gave… because there were several shots, very deep, and there is no gel to cover that kind of pain.) I tried to be brave and watch, but SKIP THIS PARAGRAPH IF YOU HAVE A WEAK STOMACH when I saw the doc’s knuckle disappear into my son’s foot, I had to look away.

The meds didn’t completely knock out the pain, it was still “uncomfortable” to have someone digging around in a foot, so the boy came up with a quirky kind of pain control. He asked me to squeeze his other leg, his left leg, really hard, so that he had some other sensation to focus on. It was a nice diversion for me, too.

This took forever. The doc simply could not find the missing piece of lead. Yet, he said AGAIN, STOP READING THIS PARAGRAPH IF YOU HAVE A WEAK STOMACH that he could see pencil marks on the muscles inside of his foot, so he knew it was in there.

Instead, he pulled out two more pieces of yellow wood — two pieces that did not appear on the x-ray. The nurse said “I think you’ve got it all.” The doc said, “No, I still don’t have the piece of lead…” He kept digging around. My son and I prayed some more. I didn’t know how much more of this any of us could take.

The alternative was to go to the hospital, have him put under, and undergo surgery. Doc didn’t want that to happen. So, he kept digging. And soon, miraculously, the piece of lead showed up. 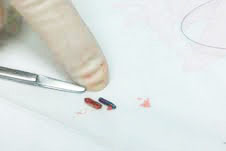 Four stitches later…. we were soon ready to head to the pharmacist. We waited some more in the waiting room (the entire episode took 4.5 hours at the Urgent Care), and my son and I had more bonding time. He confided that he had decided that now he wants to have his tonsils removed. “Because you get ice cream,” he said. I explained that would involve needles too, so he changed his mind. But he was still upset, because after all he had been through, he deserved cards. “All of us had to make cards for the girl in our class when she got her tonsils removed!” So, I pulled out my phone, and sent the phone pictures to his very caring, loving teacher.

She was all over it. Here was her immediate response:

Oh my my my…how in the world did he do that?

We checked out the pictures at the end of the day and the kids felt so bad.Â  We made him cards.Â  We’ll give them to him tomorrow if he is here, if not then we’ll send them home with his brother.Â  I imagine his foot is quite sore.

So, cards are on their way. Mission Accomplished.

It was 2:00 p.m. when we finally left, we arrived at 9:30 a.m. The doc said I could officially have a glass of wine at 2. Did I mention I was still in my pajamas?Â  I wouldn’t share that with just anyone, you know. But, I kept my coat on the entire time, so no one was really the wiser. The jammies were black.

The patient is now elevating his foot (just like his big brother) and is whimpering in pain, under the affects of codeine. We are still not quite out of the woods. The doc is afraid there still could be pieces left… that he couldn’t find. So, he took one more x-ray just to make sure. That one came up negative… but he said to watch it close for puffiness. 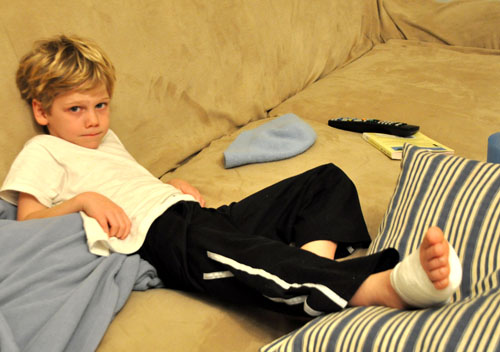 It's Time To Break The Shroud Of Secrecy on Women's Health
...
When Toys Become Real, like Velveteen
I...
Two Box Tops For Lunch
L...
Savoring One Book From Start to its Long, Long Finish
I...
The Words "Ski Lift" Shall Never Be Used Again
T...
The Uses of Enchantment
T...
Share on FacebookShare on Twitter
clean, Laugh, Life
8 comments to “Tender Spots In Urgent Care”