Because I don’t know what else to do… 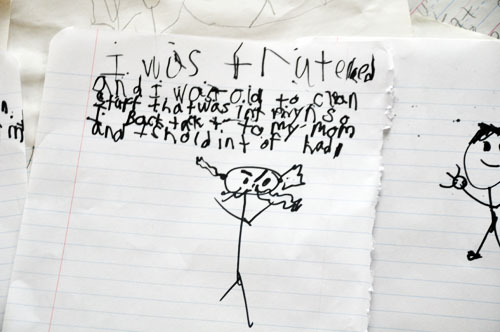 Writing, I reason, will help calm them down. Writing will keep their hands from hitting each other. Writing will give them something to think about. Writing it on paper will let me discern the evidence to see who is at fault, and who’s’ the victim here.

Writing will bring silence. And it does… almost instanteously. 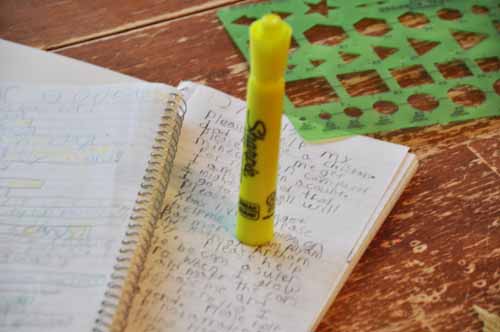 So, now, I see that might have failed. I didn’t have them write enough. I should have made them write every single day… Science has shown that the benefits outweigh the misery they feel when writing. 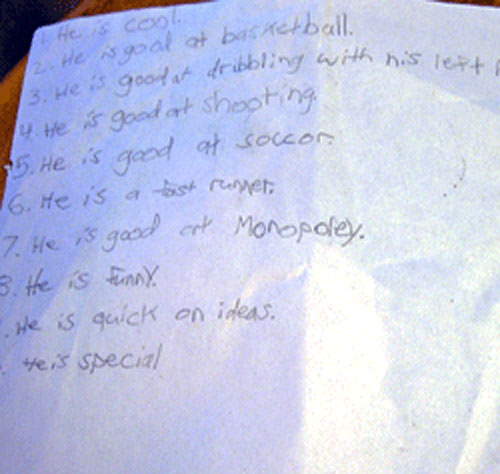 Instead, I should have said,

I want your fingers to ache by the end of the day, because you gripped that pencil so tight, and because you wrote for so long…

Think about the notebooks of Leonardo Divinci, Theodore Roosevelt, and Thomas Jefferson who captured ideas on paper, and how writing helped them organize their thoughts. Forbes says keeping a journal is a habit of successful people. There was a study of engineers who lost their jobs, who wrote about their thoughts and feelings, and ended up feeling less anger and hostility. Best of all, in 8 months, 52 percent of the engineers who wrote had new jobs.

I have the gratitude journal that we go back to every once in a while, the prayer journal habit has stuck. And I have a wonderful collection of funny pages from the things they have written.

The benefits of writing, though, go much deeper. A study in which participants wrote about events for 15-20 minutes, 3-5 times, found improvements of both physical and psychological health in in non-clinical and clinical populations.” 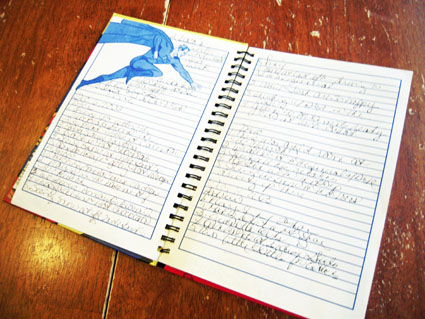 More importantly, writing can keep kids from dropping out of school, or that more dreaded subtle form of drop-out, that goes unnoticed, “checking out.” The benefits come when kids write about what they’re learning in the classroom, even if it’s about math. In her article, Judy Willis, Neurologist and Teacher explains the intricacies and nuances of brain synapses that happen when we write, but in a nutshell,

Writing can increase both personal relevance and confidence. Personal relevance comes when students can write for creativity and personal expression. Writing can also reduce the neural processing blockades that result from the stress of boredom — the most frequent reason high school dropouts give for leaving school. We know that students are engaged when material is personally relevant, and connects to real world issues and problems. And when this happens, there is increased information flow through the attention and emotional filters to the higher processing prefrontal cortex.

I personally have found that writing down our goals seems to have a power of its own. Transformative. An almost magical effect in making those dreams come true. Just like Henriette writes in Write It Down, Make It Happen

But all this aside, the sweetest reason I have found yet for encouraging my kids to write can be summed up by Janice MacLeod, the artist behind Paris Letters, in Successful Keep a Journal.

I would have wished someone would have told me to keep a daily journal. I believe I would have been happier and better at life sooner….Writing in a journal has helped me figure out my life.

Less than One Week Later, A Tree House Showed Up
I...
The Vulnerability of False Springs
"...
How To Make Rich, Intense Flavored Chili
O...
Pneumonia
T...
I almost feel guilty
O...
Snow Angels Inside
A...
Share on FacebookShare on Twitter
clean, health, Laugh, Life, Try This