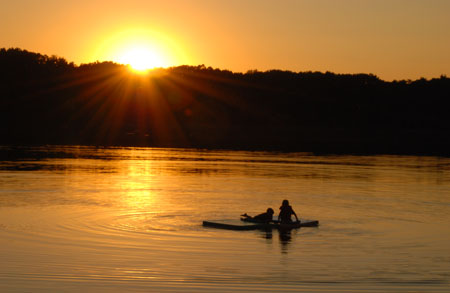 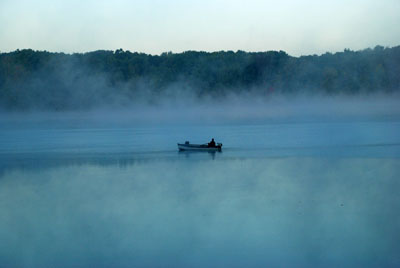 I spent some time last night talking with a woman describing her children’s annual summer treks to a friend’s lake house; over decades:

“The kids spent all day building some project, canoeing, fishing, or playing. Then they would all show up at noon to eat; and we had so much food set out.Â  Then the kids would devour everything, so fast, and then they’d disappear until dinner time.Â  Then they’d eat again, and disappear, and we would have to call them in at bedtime, because they didn’t want to come back inside.Â  My kids think that lake is heaven.”

She didn’t say it, but I know that the kids were barefoot all day, and they were asleep within minutes of their head hitting their pillow. But it takes forever to get them back inside to their beds, because sunset comes so late up north in the summer. It wasn’t her words so much, as it was that far-off look in her eyes that could see the trees, and that calming effect that water has on the heartbeat.

As I listened, I wondered if my kids will feel that way about our place.Â  I think about their overloaded homework schedule, the pressure of learning to read… yesterday is TOO LATE, no child left behind, the quest to get the latest and greatest Wii game, I-pod, Star Wars toys;Â  I just can’t wait for school to close its doors so I can get my kids out of this madness.Â  I’m not turning in the applications to the summer camps they traditional go to; realizing now that there just isn’t as much time in a summer to do nothing as I once thought. I think about our governor trying to eliminate summer vacations, and how much less time our kids will have to be bored and stare at cloud formations and dragonflies. If summer vacations are eliminated, this will be the worst time to be a kid.

Pearl S. Buck said, “If our American way of life fails the child, it fails us all.”

He Ain't Heavy, He's My Brother
I...
Midnight storm clouds dripping silver
N...
A Big Grand Chalkboard to Run My Life
I...
Melted
F...
You Must Watch The Bells of St. Mary's
Y...
What Boys Do When Moms Block the Wii
...
Share on FacebookShare on Twitter
clean, memories, the lake house
6 comments to “Mom, I miss the lake”