One of the most intriguing things about life at the lake is the night time. We are surrounded by lots of trees, woods, meadowsÂ and a constant source of water. At night, nocturnal creatures make our outdoor living space their home. We have seen raccoons, beavers, groundhogs, chipmunks, skunks, but, thankfully, no bears.

We must keep this in mind if we need to go outside to grab something after dark — you wouldn’t want to get caught by surprise, by a skunk. So, noises are made, flashlights are lit, before venturing outside after dark. When you hear the feet scurrying — you can be sure the creature has vacated long enough for you to venture through.

One night, our son was walking home from a friend’s house, and just as he was about to make his way up the steps to the deck, he heard a large commotion on the deck. Louder than any noise he could make to startle whatever it was making the noise. He gathered, from the noise they were making, he was dealing with an entire family of VERY large raccoons — and skunks. For safety, he ducked into the guest house, about 10 feet away, for safety. From there, he flicked the flood lights to get our attention in the main house.

We were inside, and I passively said, Â “I wonder when he’s coming home… it’s getting late.”Â …he’s still flickering the lights…Â andÂ we are unaware.

We brushed our teeth, getting ready for bed. Finally, the oldest brother peered out the window and saw the lights flickering. Somehow, he made it over to the guest house — and both boys, armed with brooms and mops came running across the deck, screaming to scare away the entire giant population of whatever they were hearing. But, all they knew is that whatever it was, it was HUGE. 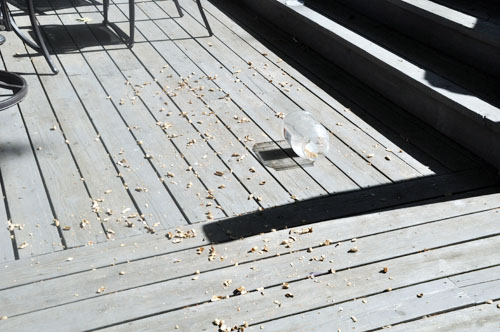 All were safe and went to bed.

The next morning, I opened the door to find the tub of unshelled peanuts someone had accidentally left out on the table all night, knocked over, with only peanut shells left. Beside that, were the “mighty weapons of mass destruction” from last night… Brooms and mops, scattered all over the deck. 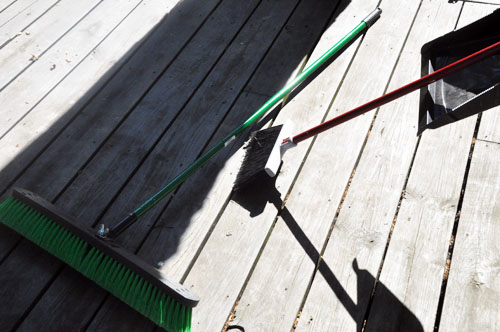 Squirrels? You were scared of a bunch of starving squirrels? 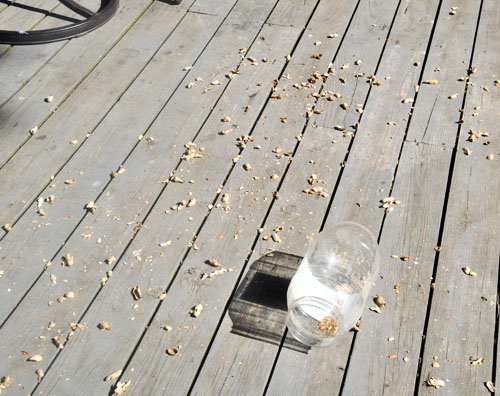 Two Box Tops For Lunch
L...
One More Thought... Before You Drift
T...
With A Single Post-It Note In My Pocket
M...
The Handwriting is on the Wall
I...
They Say Yoga Keeps You Young
Y...
He's Always Hungry
O...
clean, Laugh, the lake house