We head to the lake in all seasons to expose the boys to the rhythms of nature; to try to synchronize their souls with this ancient pulse of the seasons, of sleep and wake, retreat and release, all without truly without knowing how these experiences will impact their future lives. 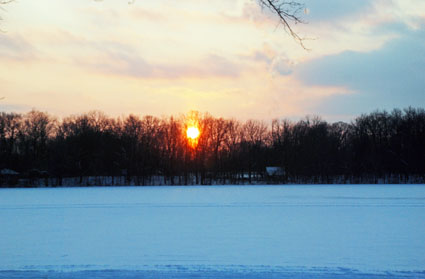 In reality, it’s a great way to get the boys out of the house so I can have some peace and quiet. However, that never really seems to pan out.

On our last visit to the lake, snow and ice were piled so high that navigating to the front door proved to be a challenge. We tried to sled down the hill, but this snow was powdery, causing our our sleds to stop Â¼ of the way down the hill. So, just as the boys were just about ready to settle inside the warm cottage and take off their boots, we pulled out our shovels, and went to work to construct a winter playground. 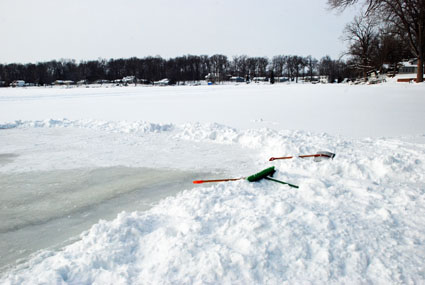 We used our shovels to push the snow aside on the lake to expose an ice rink. By the time this was finished, we were sweating in our snowsuits. 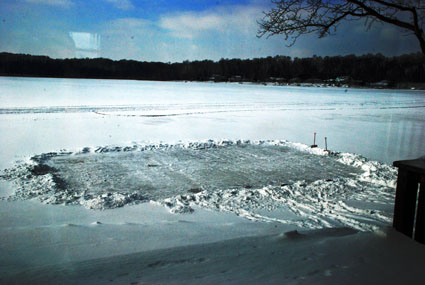 The next formidable challenge was to pack the snow down on the hill to create a slick run, free from clogs and stops. A few pushes with the saucers accomplished this, and the boys were quick to learn that the more times they went down the hill, the slicker the hill became. 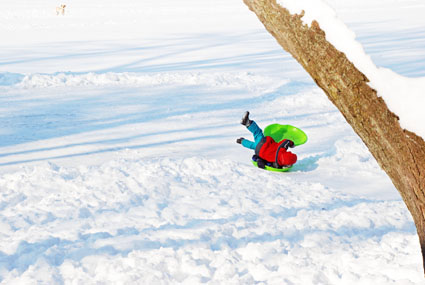 However, there was a problem. The slope of the hill took each sled run into a curve, and head-first into large rocks that were lined up along the shore. The snow was thick and soft enough to prevent serious injury, yet, this natural path needed man-made intervention. 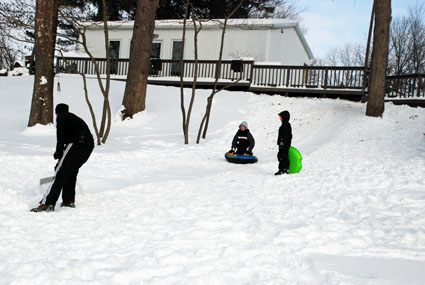 The challenge was to bank the snow just enough to move the sled path right down into the lake’s sand bank, away from the rocks. After several arguments, and bright ideas, and moving mountains of snow in all kinds of elliptical degrees, we finally had the curve going just the way it needed to go, away from the rocks. 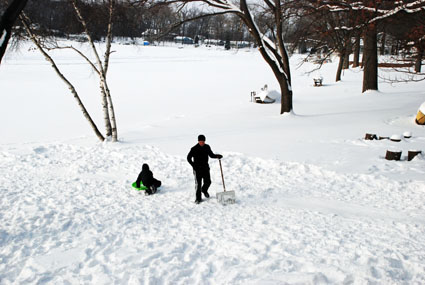 Once this was accomplished, we were able to open up our large hole in the ice rink, leading right from the sled run.

This allowed each run down the hill to skid right into the ice for another 20 feet of speed across the ice. 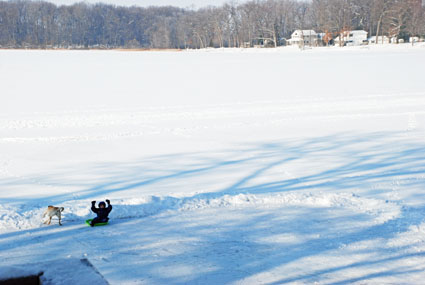 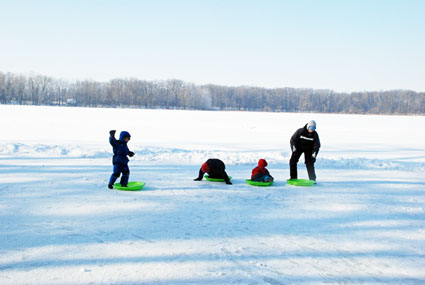 From the sweat on our brows, and our the thrill of each ride down the hill, the playground exquisitely accomplished our goal of giving the boys plenty of exercise while experiencing the exhilaration of the fresh, cold winter air.

Yet, with all our hard work, we knew the inevitable fragility of our architecture. A sudden rain, a rise in temperatures, or a night of gusty winds would metamorphosis our structure back to its original form: vapor, water droplets, and mist.

In this case, the playground’s demise was the demands of life, calling us back home to leave the lake far behind less then 24 hours after our work was done.Â  Now, it’s impossible for us to see from here what the weather has done over the last few weeks to our engineered snowtress. 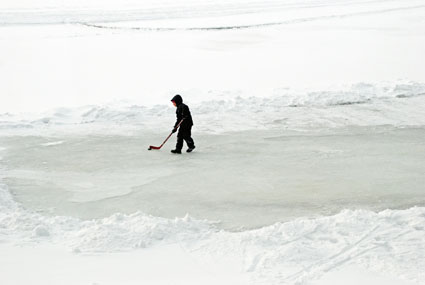 We can only imagine. That too, brings it own lessons.