I grabbed the wrong bag of berries from the freezer.Â  Instead of blueberries, I had inadvertently washed off black raspberries and mixed them into what was supposed to be blueberry pancake batter. (Can I just add here that those blueberries I confiscated picked last summer are totally worth it this horrible winter.) Anyway, there was a little boy at my table, and I won’t mention names, as I wouldn’t want to mark him for life, who hates black raspberries; just hates them, because of the seeds.

I didn’t breathe a word of my error; it was too late to backtrack, so I had to plow forward with the blackberries, knowing I would reap the consequences later when he took his first bite.

I cooked the black raspberry pancakes, placed them on the table and let them eat.Â  No one, even the one named above, complained. No one seemed to notice that there were not blueberry pancakes. The boy even said, “These are THE BEST blueberry pancakes I’ve ever had.”

As if on cue, Dad said, “Next summer, when you boys complain that you don’t want to pick berries, just remember how good these pancakes taste in the winter.”

Then, the boy said, “I’ll only pick blueberries; I hate black raspberries.”

I looked up at his face, smeared with black raspberry juice, and watched him continue to take bite after crunchy bite. I bit my tongue, and didn’t say a word. 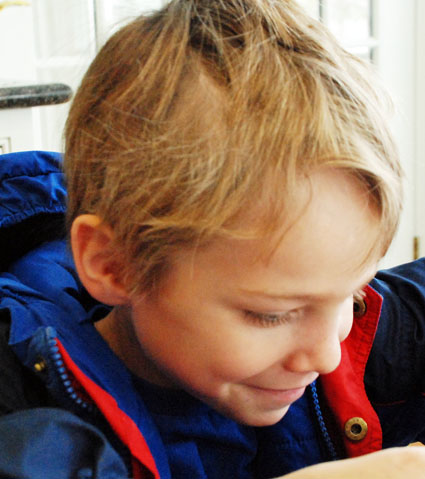