As I was busy preparing the marinade for the steak that my husband would be cooking on the grill, my stomach was saying no. Ditto to the coleslaw sitting in the fridge that I had made from scratch just a few hours earlier. Â I wanted something smooth, comforting and easy to swallow — yet, yummy. The day had already involved hours of 90 degree heat, sitting at a soccer field, the sting of sunscreen dripping into my eye that even a shower couldn’t wash away — and I did not have the strength to digest a bite of steak, or cabbage.

Instead of crawling into bed and hiding under the covers, I proceeded to pamper myself with a meal — even though I didn’t know quite what it was I was craving. Who knew, I would have discovered something so simple to make, yet was exactly what I had been craving all along. And, the entire dish took as long to make as it does to bring water to a boil and cook the pasta. That quick.

You know those times, when you stare into the fridge, hungry, but not sure what you want. This may be it — follow along and you just may find the answer to what you’ve been craving too.

Following the instincts of what my stomach craved, I made the grown-up equivalent of a child’s comfort food. A child’s idea of comfort food, would be, something like warm rice cereal, or cream of wheat. Â Yet, for this, I needed something a bit more sophisticated.

Pasta — as thin as I could find in the pantry… vermicelli.

Dried chanterelle mushrooms. The ones I bought in the package over a year ago and have never used. I used the boiling water from the pasta to rehydrate them. If you don’t have some. Get some. Today.

I started sauteeing some olive oil in a skillet, and threw in a couple of whole cloves of garlic. Didn’t even bother to slice them.

Next, I threw in the hydrated mushrooms into the oil, saving the hydrating water.

Then, I threw in some salt and flour. Â Then the magic appeared. Those mushrooms sauteing in that oil started to smell EXACTLY like the fried morel mushrooms I never seem to be able to find year after year. Now, we’re talking comfort. And, if you want to know what morels taste like, and why we head to the woods every spring to find them, this would be your answer.

Let the flour turn a bit brown — like toasted. Then add some half and half, or milk, and the reserved mushroom water. Cook until thickened.

I didn’t even add cheese, but you could have. But the mushrooms were so perfect, I didn’t want anything to mess it up.

Now, I had a little bowl of the mushroom pasta, just an appetizer, so that I could save my real bowl to eat when the entire family was eating their steak.

But can you believe that the entire mushroom/pasta thing was gone? Gone. All I had was an appetizer, because everyone else, it turns out, loved this too.

So, I made another batch… just for me. (Really, that quick and easy to make.) There was some leftovers, and I put that bit of pasta in the fridge. And THEN, I buried myself under the covers and went to bed.

The next morning, I warmed the meal up for breakfast. I was heading out to the soccer fields for yet another day at the tournament. 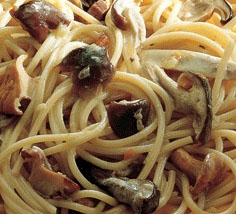 Fried Sage Quiets the Nerves
I...
Harvesting and Preserving Basil
M...
So, The Boy Grew Up and Decided...
I...
The only reason I have this Elf in the first place
...
Mystery Readers
I...
Hot Flash Dip
B...
Share on FacebookShare on Twitter
Eat, Life, Make Something
2 comments to “Making Exactly What I Craved”