The eighth graders arrived at the middle school at 7 a.m. Tuesday to load the chartered buses for their trip to Washington DC. The trip is packed with visits to monuments and museums on jam-packed mornings that begin at five, and back to bed at 10:30. A trip of a lifetime, to have an exhausting itinerary planned so that “they will see just about everything there is to see.”

There are rules. Strict ones. No cell phones. The parents, surprisingly, are having the most trouble with this rule. “What if something happens? What if he gets separated from his group?” Really? You’re worried about your teenager getting separated from his group? How likely is that? There are enough security guards and chaperones (no parents on this trip) with cell phones around that can help your child if he really needs help. They are not visiting the Sahara Desert. Did you take a trip without your parents a few decades ago? Did you have a cell phone?

This need to stay in 24×7 touch is mind boggling when you consider how free we have been from such entanglements for centuries. Teens may not realize this, but the cell phone is really a tether – when they are assigned a cell phone number, they’ve given their parents complete access to their whereabouts at all times. So different from when I was a teenager. Then, we were free to do and go wherever we pleased, as long as we were home by the curfew.

The night before his exodus, I couldn’t sleep – so much anxiety about whether I would remember to tell him to bring an extra pair of contacts, “do you have your water bottles,” and wondering if he would be too embarrassed to take the time to cover his fair skin with sunscreen throughout the days of their long walks around our nation’s capital. My husband was out of town too – so there was no one to help us if we forgot something between the two of us.

I woke at 4:30, and tossed and turned before seizing the day at six to cook blueberry pancakes, and sliced grapefruit. (The grapefruit he loves; but I rarely take the time to make it for him.) He was calm, self-assured, and confident – as he had laid out everything the night before. Except for that awkward moment when I asked for a hug at the bus, in front of his buddies, the entire send-off was completely stress-free and uneventful. 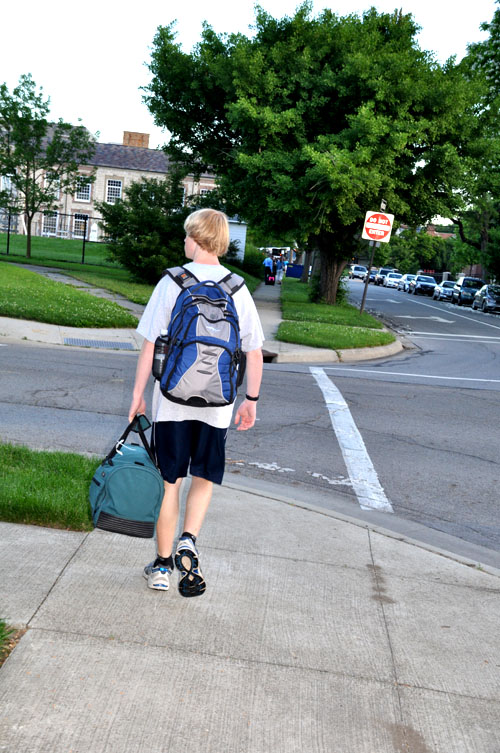 I went back home and sighed with relief – there was one hungry teenager off my hands for a few days. I settled back home to drink a cup of tea – but peace didn’t last long. His brothers were already fighting over the extra package of Oreos I had picked up at the grocery for his “carry-on” snacks.

Our house is like a circus, so there has been little time for me to sense the missing beat of his foot on the stairs, the emptiness of his bed as I pass it on the way to mine, or to take the time to say, after the dinner dishes are cleaned to say, “Are you still hungry?” I would think of him, though, only when I passed the middle school – the place where he spends so much of his time learning, and practicing for track.

Through some strange confluence of events, he called us last night around 10:30. This was an unexpected surprise. I won’t explain how his phone call came through – as I wouldn’t want the details about the broken rule to get out.Â  He explained that tomorrow’s weather forecast is 92 degrees — and tomorrow is the day the boys don their shirts and ties and walk all day, ending at Arlington Cemetery for the changing of the guard at the Tomb of the Unknown Soldier.Â  He had trouble reaching the entire name of my Uncle when he did the rubbing of his name on The Wall — but the principal helped him. I also discovered, when I heard his voice, how much I miss him. I could also tell from his voice, how much he missed us. And that was the most unanticipated, sweetest thing…

Here Comes The Sun
R...
Christmas: I Dropped the Ball
T...
We Drove Until We Found the Sun
T...
When We Canoed Under that Tree
T...
What REAL Toys Look Like
A...
He Heard His Bone Crack
I...
clean
4 comments to “Last Night I Heard His Voice”