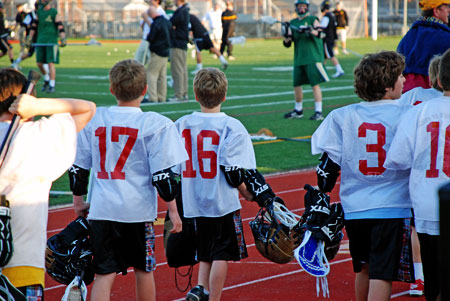 Invented by native North American Indians in the 15th century, it has been said that the game of Lacrosse is to be played “for the pleasure of the Creator.” Me, as the Mother, perhaps? Because, I really like this sport. This spring, I have two boys to cheer for on the field.

I’m purposely ignoring its dark place in history when the Indians played from sun up till sun down, sometimes for days as the game traveled for miles with players gravely injured or killed. Now, the goal carries much less religious and spiritual significance.

The goal? Simple: Use the stick and its attached pocket to scoop, catch, carry and pass the small rubber ball to get it in the net. Also, stop your opponent from getting the ball in the other net. Think soccer revved up with sticks. Because of those pads, Lacrosse naturally promotes “team building.” 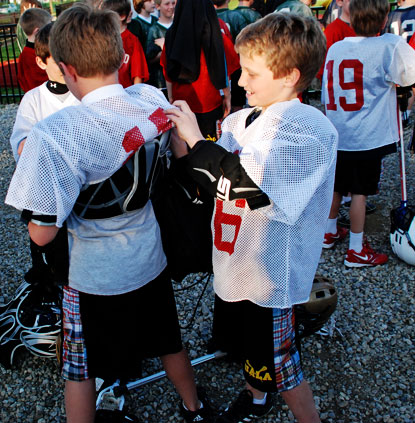 The coach said, “I don’t care what the score is. My goal is to teach the kids to play as a team.” He even added this; “If I see a kid that is hogging the ball and is not giving it up to the rest of the players, I’ll pull him out — regardless of how many goals he’s scoring.” He looked to one parent, with a player on the HS lacrosse team for validation and said, “Isn’t that how they do it in high school?” Sadly, this parent, with all of us looking on, disagreed with the coach. Her goal is to teach her child to win. The coaches methods are still prevailing, despite her protests.

Unlike football, we have only two practices each week. And mercifully, only five games all season.

More technical information I’ve picked up: The players clamp the ball under their stick and flick it out to their middies (midfielders), who start on the wing restraining line near the sideline and sprint in when the whistle is blown to start play. Attackers and defenders cannot cross their “restraining line” until one player from the midfield takes possession of the ball.

I love this quote, which I heard in the car this morning as I was driving one boy to practice. “Sometimes I just don’t want to go to practice… but then I get there, and it’s JUST SO MUCH FUN!”

Lacrosse is laid-back action. Nice and easy, like Spring itself. Games are fast and quick… another reason to love this sport. The clock keeps ticking between goals when the ball is dead for a few seconds. Games are usually over in an hour, with scores in the tens. But still, the main reason I love this sport? These cool-looking shorts… that come with a touch of PLAID! 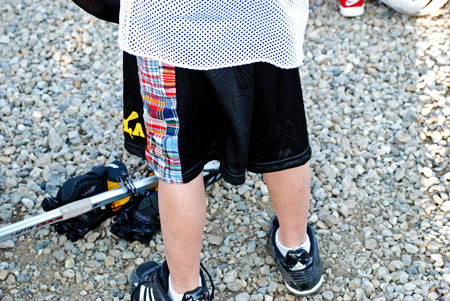 What’s not to love?! (There is some lacrosse action in this video here from last year.)

Eggnog French Toast Without a Mixing Bowl
F...
Let There Be LED Light
T...
Might Squirrel Warriors.
O...
Mission for Today: L Train to Brooklyn
I...
Bigger Than Life
T...
When He Has A Sharpie in His Hand
I...
Share on FacebookShare on Twitter
clean, Life, You Tube
5 comments to “Lacrosse: A sport a Mom can love”