The ski (NOTE: It’s really a beginner’sÂ PLANK) I love to slalom with wasÂ unavailableÂ this past weekend. I was a bit relieved… because although I have overcome my fear of skiing — the MEMORY of being afraid of skiing is still there. I remember what it feels like to be afraid — but I’m not afraid — I just remember being afraid. Do you understand that?

It takes a bit of work to overcome that fear-that-doesn’t-exist — but I can. I have the skills and the experience of skiing to back me up. But, it’s messy. It’s an effort to do those mental acrobats, reminding myself, “Remember, you’ve already overcome this. You ski, and nothing bad happens.” It’s tougher too, when you haven’t been on those skis for an extended period of time.

This weekend that ski I use, the bench as I prefer to call it, (as it is nice and wide!), was locked up in a friend’s garage. Phewww!!! What a relief! No mental acrobats! Just relax.

Still the fact that I was wasting a weekend, this close to winter, without skiing was knawing on me. You know — if you don’t keep doing that ski thing, pretty soon, you won’t be able to do it any longer. You don’t keep using those core muscles, once found, that pull you up. You stop using them, and you forget where they are. That’s what happens — people just stop doing it, they get old — and then the next thing you know, they say, “I used to ski… but I don’t anymore.”

If I even wanted to ski this weekend, I would have to be on a wakeboard. That was the only “ski” available. And I don’t wakeboard. The boys do. That ‘s the new thing… not an adult thing. The boys even said, “I don’t know any moms who wakeboard.”

Were those fighting words? Probably not. The air is chilly and the water is cold. It’s too cold to ski. The wind is blowing — can you imagine actually getting into that chilly water? No. Ouch. Yuck. Who needs that?! I’ll just sit here in this boat with the towel wrapped around me and enjoy watching the boys wakeboard. And besides, can you imagine that wind whipping across you after you’re wet? Ugh.

Then, my husband gave me that “OhÂ brother, look.”

That was it. Not skiing — no ski or not — was the same as giving up. I hate that look.

I stood up in the boat, dropped the towel, and took the wakeboard — and said, “Show me how to get these things on.”

That was easy enough. “Now, how in the world do I get off this platform and into the water?”
Thanks for the shove.

The water is not that bad — heck, it’s not even cold.

I have the rope, the boat engine starts up — there it is — the FEAR. Mental work. Calm down. Calm down.
“What do I do? Push with my toes or my heels?”
Man, my legs are far apart. This is terribly weird.
“OK… hit it, I’m ready.”

I can’t believe I actually had enough courage to tell that man to accelerate the boat, with me, holding a rope behind him, while wearing boots and a board attached to my feet. Yes, you did do that! Aren’t you the brave one?!

UP. I am up the first time. I cannot believe this… and I have no idea how to wakeboard… I have no idea, after watching my boys all these years, how to actually move on this board. 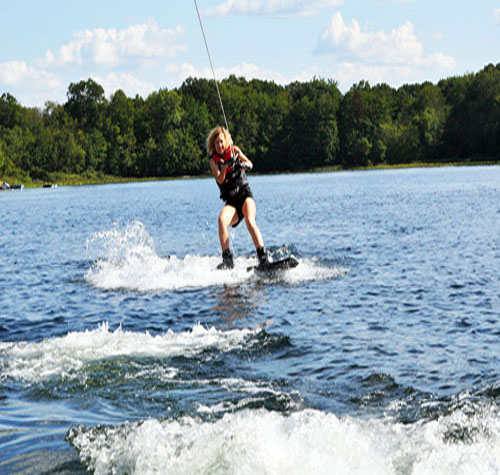 So, I drop the rope, and think, maybe now is the time to ask for some instructions — from my son.
He explains to me that I steer with my right foot, left foot forward, squat, but back straight.
Ok. That’s good enough. That’s all I need to know to get around the lake one full time.

I didn’t want to brag, but heck, this wakeboard thing is NOTHING! Slalom skiing is so much harder! What is the big deal about this wakeboard? Is this the lazy man’s ski? But, then, I remember, the jumps and all that stuff they do. NOT going there.

Make Fair-Style Lemon Shake Ups at Home
H...
Thank You Lego
T...
My Latest Writing Job is Not Being a Ghost!
I...
I Wonder if Angels Really Are As Tall As Skyscrapers...
I...
The Pear Tart That Uses One of Those Special Secret Ingredients
Y...
I need your advice
T...
Share on FacebookShare on Twitter
Laugh, Life, the lake house
One comment to “Just Show Me How to Get These Boots On”