“As he looked about and saw his brother Benjamin, his own mother’s son… Deeply moved at the sight of his brother, Joseph hurried out and looked for a place to weep. He went into his private room and wept there.”Genesis 43:29-30

It takes less than 60 seconds to read this passage. When I read those words to our boys, it took me about 45 minutes to get through it. Joseph was a slave, and now he is Prime Minister of Egypt. How did he become a slave? Just ask his brothers. They sold him, and told his father that he was dead.

It’s been over 30 years since he laid eyes on his baby brother, Benjamin. And he wept.

But, as his brothers stand before Joseph, with their grain sacks opened, hoping that this strange man in Egypt will give them grain to end their hunger from this 7-year famine in Egypt, they have no idea that this is their brother — the one they sold. But Joseph knows. And rather than lashing out at them, and “making them pay” for what they did to him, he shows them mercy and grace. The brothers have no idea who they are dealing with.

Here’s what happens next:

“After he had washed his face, he came out and, controlling himself, said, “Serve the food.”Genesis 43:31

Then, in one crafty move, Joseph seats all of the 11 brothers in order by age. His brothers are dumbfounded — how did he know, they wonder?

Finally, in chapter 45, Joseph can take it no longer:

“Then Joseph could no longer control himself before all his attendants, and he cried out, “Have everyone leave my presence!” So there was no one with Joseph when he made himself known to his brothers. Â And he wept so loudly that the Egyptians heard him, and Pharaoh’s household heard about it. Joseph said to his brothers, “I am Joseph! Is my father still living?” But his brothers were not able to answer him, because they were terrified at his presence.”Genesis 45:1-3

I bet they wereÂ terrifiedÂ — I can’t even imagine what they were thinking. They probably wanted to run and hide. But they soon learn, there is nothing to fear.

There’s a reason they call it the Greatest Story Every Told. For that reason, I have been trying to read all of the major stories of the Bible to the boys, Â in order. But as you can see, I get hung up on so many aspects of the story, and it takes me forever to get through a simple passage! And the boys have so many questions — there’s no shortage of enthusiasm here to hear “what happens next.” The stories seem to come to life as we read them after dinner — when we are all home! Which is also rare. Â We are just now at the Ten Commandments. We have a very, long way to go. And my oldest is going over to college in a year and a half!

IÂ don’tÂ  want the boys to just “know” what happened with Noah’s ark, but I want them to know how these individual Bible Stories fit into the context of the whole story of God’sÂ redemptionÂ  And just reading a picture story Bible book is not as easy as it looks. It takes time. These stories are deep.Â AndÂ they take time.

Where has the Jesse tree been all this time? I just found out about it — Â The Jesse tree advent tells the whole story of Jesus’ family tree in a simple 24-day format. Jesse is David’s father, as referred to in Isaiah 11:1, in which Jesus is referred to as a shoot coming up from the stump of Jesse, the father of David.

The Jesse tree advent includes a simple ornament, a photo that tells of the events — from Genesis to the New Testament that reveal God’s redemptive plan. Creation, Adam and Eve, the flood, Jonah and the Whale, Elijah, Â and the fire, Esther, Mary — all of it! Each day comes with a simple ornament.

I’m getting some help from this book

which has daily readings. Then I found this online version here, at, A Holy Experience— that includes the most beautiful ornaments I have found so far, that you can print online, and turn into your own ornaments.

Here is a sample of what you’ll find there: 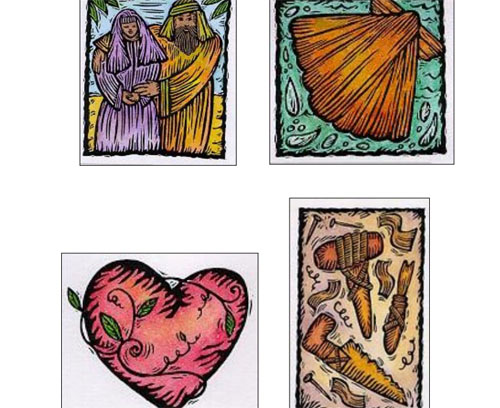 (I think I might attach mine to white dough stars.)

We are busy working on an Advent Calendar to hang them, on the back windows of the kitchen… More to come.

For Our Next Nature Lesson
F...
Kickball: I Am Not Chosen For My Athletic Qualities, But I'm Chosen
R...
You've Reached a Whole New Level When....
T...
About that Off-Centered Window
W...
Remebering You as A Superhero
...
Night Creatures
I...
holidays, Life, spirit, Try This
One comment to “Joseph Hurried Out and Looked For Place to Weep, and other great stories to share”