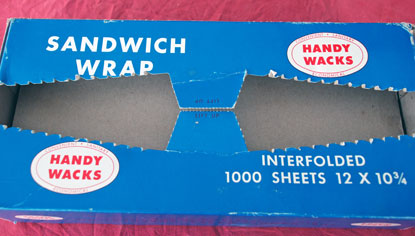 With its 1,000-sheet commitment, I didn’t want this to end up being an impulse purchase I would later regret. Would I really use the 1,000 waxed-paper sheets, or would I toss the box aside with several hundred still left in the box?

When I bough the box at GFS that warm morning one day in the spring, I had imagined myself serving sandwiches and pickles deli-style to our boys. Ideally, the meals would always be alfresco. These sheets, I hoped, would cut down on the endless conveyor belt of dirty dishes that runs across my sink. I bought red-plastic baskets to match. What I hadn’t foreseen was that the grease leeches through the waxed paper; instead of washing plates, I was washing red baskets.

The box was large, but still seemed to fit perfectly in a drawer by the kitchen table. The holes on the top provided easy access for the kids to pull one out whenever they needed one. What a novelty these were, to the kids, who were transported to a “restaurant” every time we ate with the sheets.

How long would this take? I have my answer, now that five years have passed. Not one of the 1,000 sheets was ever wasted. When I put my hand into the empty box and found no sheet, I was shocked. I picked the box up, and shook it. I didn’t see this coming. I had just pulled a sheet out earlier this morning, and I had no indication that I was at the bottom, the very bottom, of the box.

The victory, however, is bittersweet. I smiled, and, out of impulse, reached for the phone to call the one person who laughed at me the most when I bought this box. Instead of saying, “See, I told you I’d use them,” I caught myself. I thought of maybe just calling her number anyway, just to see if maybe she would answer.

Do I go back to that store to replace this box? I recall that spring day when I bought this. That little boy who was with me that day is now much bigger, and will not clap with glee just because I buy the giant-sized animal cracker barrel too. Now, his little brother, who wasn’t even here then, can do that.

I now see that this box is sort of a time capsule — a time capsule of 1,000 meals. I ponder how could these waxed-paper sheets, residing so close to our kitchen table, where so much of our life has transpired, survive virtually unscathed? I think of the conversations they have heard about football and soccer games, plans made for vacations, plans to buy the lake house, friends’ voices that have faded away, and new friends’ voices that have joined our own. The baby that came, the toddlers that grew, and the math problems it has heard us agonize over at homework time. Then, there were the hail storms that have blown through our kitchen, and the power outages and the meals. How many tortilla cheese sandwiches have we laid upon these sheets?

How many times have I said in the last five years, “I didn’t see that coming,” when life was both hard and joyful, in just the same way as when I found this box empty.

A simple change in something as inert as a box reveals to me how life is spinning so fast. Instead of giving me a quick and fast way to serve lunch, I wish these waxed-paper sheets would have taken the time to whisper to me — a warning that we would loose so much, and yet gain so much in five short years. Getting through the box was never the real issue; she’s not even here to tell anyway.

I guess the box has been whispering all along. Now, maybe I’m ready to listen to the box of waxed paper sheets that brings back the memory of that sunny spring day when all I wanted was to be frugal and faithful, by using each sheet wisely. Now, that I’ve mastered this box, I think I’ll try to apply this same sense of frugality to each day, by savoring the ephemeral moments of life. 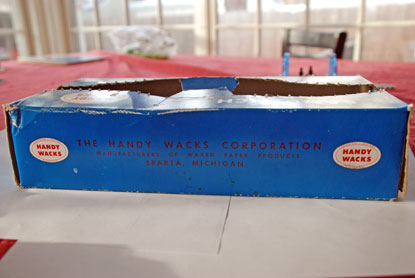 I went to Dance Club and all I shot were hands and feet
D...
What Makes Them Fight?
I...
As Rare As Beach Glass
A...
Free falling like a feather
A...
When He Was Master of His Universe
O...
Are You Claustrophobic?
W...
Share on FacebookShare on Twitter
memories, sunday scribblings, Tears
25 comments to “It’s Empty”