I drove the boat, nor was it as scary as the time I jumped out of an airplane, (except for the part when I was afraid my arms were going to come out of my sockets), but I did learn how to ski this week. First time EVER. The lake was perfectly well-drained of other boaters this week, making it ideally suited to learning and training. To some, skiing is no big deal; took me three times to his one. I whispered in my husband’s ear, right before he put on my skis for me, that I was terrified. He said simply, “I know you are.” We both knew I was doing it anyway.

It’s amazing what you can accomplish when your sons are in the boat watching you, and you absolutely do no want to fail, even though you don’t know what you’re doing. Kids give you that kind of power.

If you let them. Kids do drain our energy; it’s too easy to let things just slid by, to stay on the chair when they ask you to throw the ball, to say you’re just too old to try something new — because we just might get our wish if we keep saying those words. The water was cold; the air was colder, and no I really didn’t want to ski — or so I thought.

The choices we make define ourselves as a person to our kids. Used wisely, this can give us great leverage in the years to come. If we use the power our kids bring us to stretch our boundaries a little, our kids begin to see us in a new way. At first, they may act a little bewildered, because you’re acting so weird. That quickly fades to a new sense of respect and admiration. This is especially helpful if you have a pre-teen, who isn’t quite sure whether he wants to take your word for things anymore or not. It’s good parenting to keep them a bit confused about what you’ll come up with next — once in awhile.

Nor did it hurt that one of my lake neighbors came by and said, in full earshot of my kids, “I was shocked when I talked to your Uncle — all this time I thought you were in your late twenties or early thirties.” This really confused my son. (As soon as I find out what the neighbor wanted, I’ll let you know.)

Lots of yoga contributed to my lack of back pain; my shoulders were a bit sore. I’m so relieved I learned how to do this before I’m too old too learn; then it dawns on me that I must hurry up and learn how to slalom (one ski); before I’m too old! I wonder if I can find “ski” exercises to do over the winter so that I’ll be in shape for next summer. So, I go out the next day; listen to the instructions about leaning back, balancing, straightening one leg, bending the other, dropping the ski to the side, “Drop your ski when you’re outside of the wake,” he said.

“I’ve never been outside the wake.”

That’s a problem. There’s so much to remember right now… arms straight, but only at the beginning, knees bent, lean back… I’m still getting used to skiing. But, still, I feel the clock ticking; so I keep trying. I need hours of practice behind a boat before I’ll be ready for anything fancy.

“Slow down,” I tell him. I just feel so out of control when he’s going that fast. He’s only going 18 mph. When he skis, I remember that I drive the boat at thirty-four miles per hour. When he’s crossing the waves, he’s going faster than the boat… maybe 45-50 mph? The speed… is all I can think about. Free falling at 120 mph is one thing; but when you hit the water at 18 mph… sometimes you think your eyeballs just rolled back to the top of your head. Maybe this is one thing I just won’t do after all; today. I think I’m in a bit over my head. But let’s not forget; I did learn to ski.

Now that I’ve had a taste of “standing up on the water” (as my son calls it) behind a boat, the skill, the courage, and let’s not forget the thrill it involves, 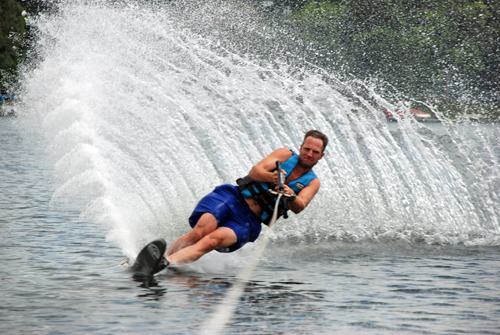 I have a new sense of admiration for anyone who skis; especially those who slalom.

Razing Frogs
"...
There are No Stars in the New York City Sky
M...
Beginner's Luck
...
Robin: A Retrospective Look
O...
At The Lake
...
UPDATE: Are You Girls Ready?
I...
Share on FacebookShare on Twitter
Laugh, Life, the lake house
6 comments to “It was nothing like the first time”