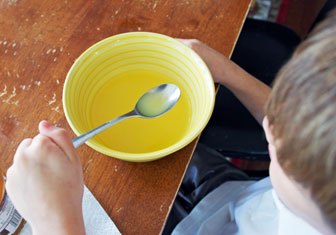 It was a quiet, intimate, although rushed lunch. What do you serve a child for his last lunch as a kindergartner? Over the last 9.5 months, I have quietly savored these lunches with him, knowing these were my last. Rather than buck tradition, I served him his favorite; chicken noodle soup — hold the noodles and chicken, I’ll-just-have-the-broth soup.

I warned him that I would cry at his graduation today. “Why?” he asked.

“Well, you are going to miss me when I am gone in first grade. So you might cry because you’re sad.”

Now that the cat was out of the bag, I just let the tears flow right there and then. I have never been at ease the entire year of kindergarten, simply because I knew it would all come down to this. The year would fly by, and before I knew it, he would graduate and our magical mornings at home would soon be over. Forever. God, I’m dramatic. Still, it’s true, you can’t deny that.

I put some peanut butter on a bagel. His little brother wanted one too. His bagel broke when I tried to pry the two slices apart. Traditionally, this incident is always a ridiculous source of complaints at the lunch table, for both of them. Soon, the little brother was throwing his hissy fit over the broken bagel.

The older, soon-to-be-first-grader gently said to him, “It’s OK if your bagel is broken… because when you bite it, it will still taste the same.” More Best shot Mondays here. 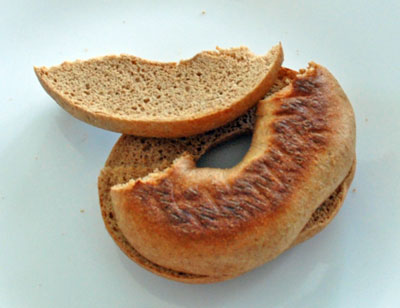 What It Feels Like to Have Someone Believe in You
T...
From Brass to Rubbed Bronze: Painting the Door Hardware
H...
He's a Daddy not a Dad
...
After the Storm
Y...
Our Search For the Great Pumpkin Continues
W...
Cheap Clothes Hurt Mother Earth
...
Share on FacebookShare on Twitter
best shot, clean, Life, Tears
21 comments to “In that instant, I knew he was ready for first grade”