When we pulled into the drive of the lake house, I saw that the sight-for-sore-eyes fort survived its first week in the face of deer, bunnies, raccoons and slugs – even though I ran out of time to protect it properly with red pepper, Irish Spring Soap or toilet paper tubes. We opened the doors of the van before my husband even hit the brakes. The little boys, even more excited than me, ran to get a closer look at the taller, spindly arms wrapped around the bamboo sticks, and junkyard trellis lumber. 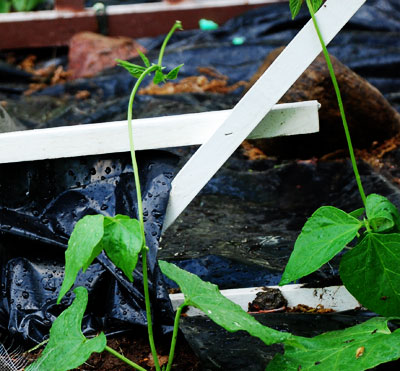 Still, the smarty-pants 6 year old said, “Mom, you said I wouldn’t recognize this fort the next time I saw it… but I do.” Ok, well maybe the next three times and then you won’t even recognize it because the vines will have filled in we’ll no longer be looking at junkyard trellis.

Water was standing in spots on the black plastic, so I used a screwdriver to poke a few holes to let the water drain. Yet, as I examined the fort with fresh eyes… something bothered me. This fort was just too small. It wouldn’t do. This fort needed a major overhaul to increase its square footage. Obviously, my blisters had healed and I had long forgotten the pain of digging.

While my husband groaned silently, Uncle Bud, a kindred gardening soul, made this his problem. Uncle Bud and Aunt Joyce were up to visit their lake house next door. I voiced my concerns to him, and in just about 5 minutes, he had a plan. This strategy only required transplanting three Jack and the Beanstalk plants, rather than all of them. The biggest improvement was to ditch that tepee-like angle of the trellis. Standing them up straight, without moving their placement on the plastic contractor’s bags, would instantly give us more square footage in the interior of the fort; and make it tall enough for my 12-year-old, who is now taller than me, to stand up, along with all his brothers. Uncle Bud helped me cut the twine with his pocketknife as we tied the bamboo poles to the trellis. 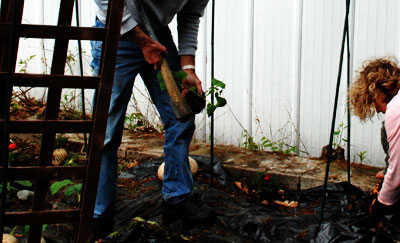 Alas, Uncle Bud and Aunt Joyce don’t read my blog, so they were gravely concerned about the Deer and the bunnies coming in and demolishing my fort. I offered all the solutions I had researched, and wouldn’t you know it — Uncle Bud had one I had never even heard of. Solar lights. “They kept the ‘coon out of my corn all summer last year.” Solar lights were readily available in our garage, and they now line the edges of the fort. 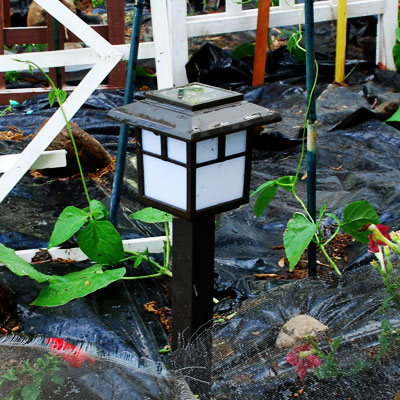 Without a drill, I couldn’t figure out how to get a hole through the soap so that I could tie the twine. As I worked all morning on the fort, I couldn’t help but notice that my 12-year old was hanging around quite a bit watching. Soon, he had the brilliant idea of the day, of simply poking a hole in the bottom of the bar with the bamboo stick, and leaving it there. 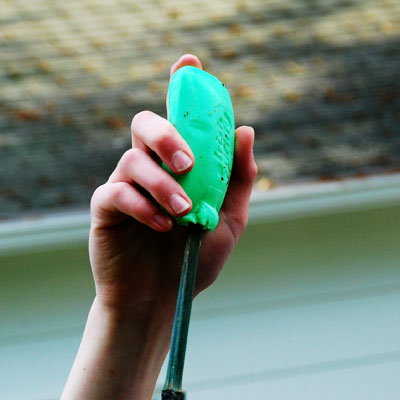 And of course, adding the box to keep the rain from washing it away too fast. 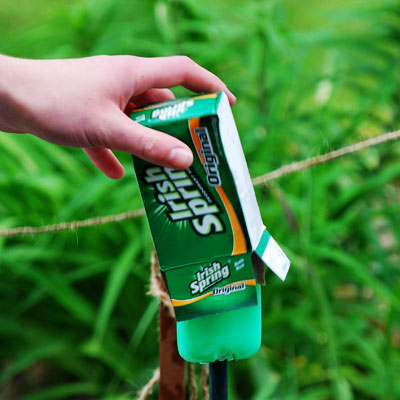 Still, what about the rabbits? I wasn’t quite sure, but I had this sneaking feeling that the Irish Spring soap that deterred the Deer just might attract rabbits. (I now that Irish Spring does deter rabbits too.) Without Wifi access, I couldn’t find out for sure. I tried calling my friends who had on-demand Internet access to do a google search, and no one seemed to be home. Honestly, I wondered what it would do to my prospects of maintaining a normal friendship if I did call on a Saturday afternoon, and asked you to google Irish Spring and bunnies. I had no luck finding Hot Pepper Wax on the shelf at Wal-Mart or Menards, and no time left to order a bottle. So, I suggested chicken wire to Uncle Bud. His face lit up at this, saying, “That would do the trick.”

About to head to Wal-Mart (a trip I always dread), when I stopped. I’ve come this far making this fort out of recycled junk, why stop now? There must be something I can use for chicken wire. Soon, I found it. Our screened porch takes a beating, and the screens are battered, holy and in desperate need of a good “spring repair”. My husband ripped off the hole-filled porch screen, and I started tearing that screen into sheets, while my son laid the screen around the outer edges of the fort, covering up the first layer of plants. We held it all down with rocks. This should help the slugs too.

I couldn’t resist calling my Dad just to tell him that the fort was now wearing tattered porch screening, boxes of soap sticking off the ends, and was accented by solar lights. Of course, I added, that I was thinking about adding a house trailer so that I can keep watch on the plants all night. Of course, that would depend on whether I could find a used one… for cheap.

My 12-year-old and I had so much fun figuring out how to outsmart every little critter we could think of. Satisfied with the fort’s new expansive size, it’s impermeable barriers; I’m happiest about this time — and the giggles this fort is leaving us. If plants can hear, as some say they do, I hope the beans are listening, laughing right along with us will they continue to soar to their 20 foot height. 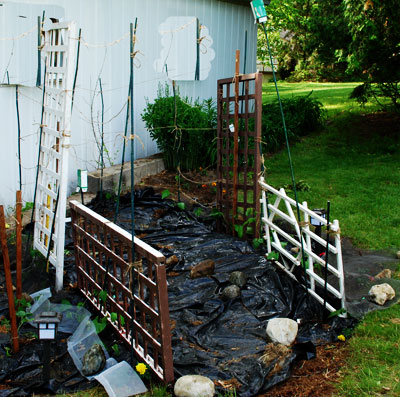 For Scary Things
â...
Sprouted Hummus, Bringing Food To Life
A...
Lights Out
I...
On Loving Pi
"...
It must be Saturday at the lake
...
High in the Middle and Round on the Ends
W...
Share on FacebookShare on Twitter
Life
9 comments to “I’m thinking of adding a trailer out back…”