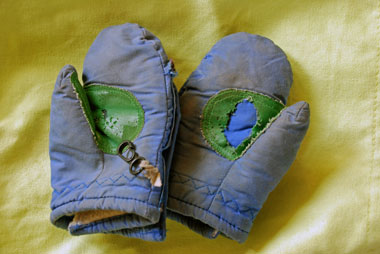 of these mittens, but I do. I bought them ten years ago, when my oldest son was 2. His three brothers have each worn them in turn, by choice. These mittens have a special feature, unlike other mittens: The open up, so that you can slide your thumb right in, and the back cover velcros back into place. 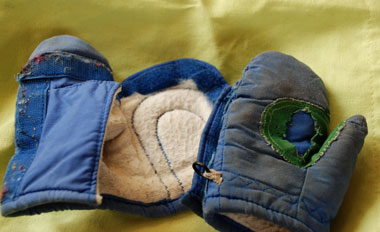 The velcro flap is what attracted me to these mittens in the first place…It’s so hard to teach little fingers how to fit into mittens. However, it took a good year before my oldest son felt “safe” enough to wear these. Maybe it was the sound of the velcro pulling apart, we never knew, but he would say, “No, No, No,” every time we opened them up and said, “You just slide your thumb right in.”

Of course, the mittens were brand new then… not faded, stained and torn. There used to be a smiley face on each of the thumbs, and that little face has now worn off.

I find it utterly fascinating that both of these mittens, despite their long and active lives, are both still here… together, still used, and currently-favored by my 4-year-old son. This was the picture I took for my Best Shot Monday.

I want to pay tribute to these little swatches of fabric that have kept my son’s fingers dry and warm through so much wind, freezing temperatures, and attempted snowmen and snowball fights. These mittens have done their job well, taking on the cuts, tears and stains as a sacrifice for my son’s little hands.

Of course, in the two days that passed since I took this photo, the mittens have shown up missing, for the first time. They made perfect Buzz Lightyear Gloves for his Buzz Lightyear Costume for church, and they were absently left behind.

I called the teacher after she returned home; she found them (she was probably ready to take a collection to help my son get a new pair of mittens after she took a good look at them!) and she locked them up, and they are safe in the Sunday School cabinet until next week.

Don’t forget to enter the Valentine Wishes Contest. Love is a choice, not a feeling…

We Have our Methods of Finding Out
â...
The Room
"...
What Grinds His Gears
F...
The Most Delicious Food?
R...
I Don't Mean For This to be Sad ...
W...
Nutritious Chow
R...
Share on FacebookShare on Twitter
Life
25 comments to “I’m surprised I still have both”