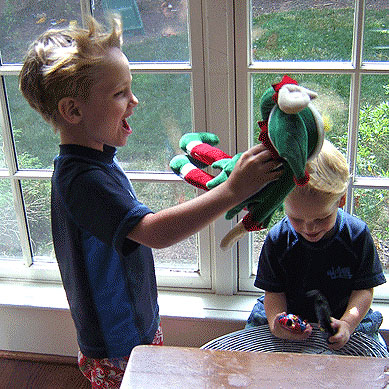 Some people would say, “It’s good that you’re busy right now. You know, to keep your mind off things.”Â  Things like how much I’m missing my 5-year-old since he started kindergarten.

Five years ago, this little guy worked his way into my heart with his cries and coos that interrupted my daily routine. Now, for three hours a day, he leaves my routine, and already, I’ve found productive ways to fill the time with his little brother. Time flies, and we barely have time to think about who is missing. But I do. Busyness doesn’t allow me the space to notice it; but it’s there. It’s in the empty spot on the couch when I open the book; it’s in the peace when his brother has no one to fight with over which book I’ll read first; and it’s in the silence when I don’t have to wonder why he is being so quiet.

I wonder, why just him? Why do I not miss his older brothers too? I remember now, that I did; but it wasn’t today. That was years ago; in the first few weeks that each one of them started school. I can trace the memory back to the exact place I was standing when I moped about not having each one of his brothers around. What happened? Why do I no longer miss them?

I guess that empty space is something you eventually get used to; until it finally fades away. It becomes “normal.”Â  Just as the leaves begin to fall in a few weeks, I will get used to seeing the trees without leaves; and I will also get used to this son being gone too. This adjustment will be imperceptible. If I’m not careful, I won’t notice this as it happens.

I should be grateful that time heals this transition. That time lets me move on without the burden of sadness. I am grateful for that in some ways; but I just don’t want to forget the spaces and corners he has filled my days with over the past five years.

As I sit and marvel at how beautiful this little guy is, I start to calculate in my mind a way for him to escape from school. Meanwhile, he’s busy telling me how much he wishes it was all-day kindergarten because he misses the hamster in the class.
“What’s the hamster’s name?”
“I don’t know,” he says.
I want to remember what I learned today. I miss him. I’m missing him less and less each day. And, I’m just not sure if that’s a good thing or not.

Parmesan Cheese Crisp Crackers
P...
Update: The New Brain Food: How To Make A Perfect Bird In A Nest:
"...
Embracing Only What Matters
A...
Melted
F...
Chaos
A...
Forgot To Warn My Brother
a...
Share on FacebookShare on Twitter
blog, clean, Life, Tears
17 comments to “I’m learning not to miss him so much”