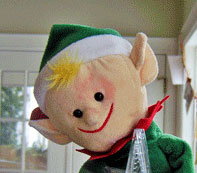 I can’t find the Elf, and the kids are starting to ask questions. We’re already at Day 5 of Advent, and he has yet to make an appearance. The problem is, I don’t know where the Elf is.

It all started when, as usual, the kids spotted him as I was pulling out all of the Christmas decorations. That Elf flew out of the box so fast, I barely had time to contain him before he was prancing down the foyer and into the kid’s arms. I made a fast move, (I can still remember it all so clearly in my mind), swiped him out of the air and …. stashed him … somewhere… but I can’t remember where.

I’ve looked in all the obvious places, and he is truly no where to be found. Worse, the kids haven’t even found him — which is highly unusual in this house. I’m starting to miss Mr. Elf. He adds a level of playfulness we are missing. In addition to swinging from the ceiling fans, sometimes we find him upstairs dancing to the kid’s CDs (he ALWAYS turns up the music too LOUD). He gets into the dress-up costumes and tries to pretend he’s Batman, or he takes all of our Christmas DVDs out of their cases and mixes them up. Once, we even found him in the freezer eating ice cream.

I hope Mr. Elf shows up soon, because Christmas just won’t be the same without him.

Real Emergencies, and What They Are Not
W...
Meanwhile, the Frog Waited on the Tree Until the Coast Was Clear
...
The One Lenten Practice That Doesn’t Punish You When You Cheat
I...
By car, it would take us 11 hours
...
Puppy Heaven
T...
This Is Not an Indian Corn Wreath
L...
Share on FacebookShare on Twitter
holidays, Laugh
5 comments to “I’m In Trouble”