If I could grow a pumpkin, I would etch my lad’s name in the pumpkin’s green skin when the pumpkin was just a baby. As the pumpkin grew, so would the name, in an earthy version of having a “name in lights.”

The problem, of course, was getting the pumpkins to grow. Each year, the blossoms would come, wither and die, without leaving that green little pumpkin ball. This year, inspired by the Jack-In-The-Beanstalk seeds from Seeds of Change, I decided to give the pumpkins one more try and ordered pumpkins seeds. The pumpkin variety I ordered was a small pumpkin that would make a delicious pie, the packet promised. My neighbor advised me to plant them mid-June; to tie their maturation to Halloween. I dutifully planted them, with the boys, in the mulch bed, full of evergreens, in the front of our house. The large leaves, growing in the formal front bed, would give the neighbors lots to talk about while we were at the lake, I thought. 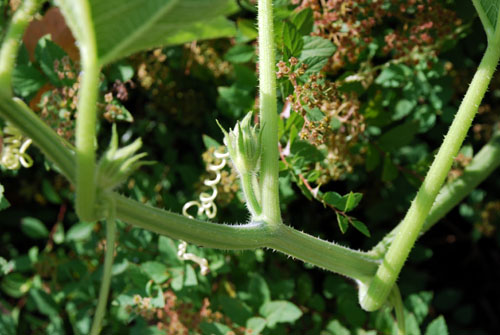 A few days after we made our migration home from the lake, we spotted a pumpkin, tucked under the evergreens, in the front flower bed. To my amazement, four pumpkins (one for each boy) continued their surprising steady growth. I will add here, this was a very SMALL space.

The pumpkins soaked up all the water we gave them, and responded in kind by bulbing out into perfect pie-sized pumpkin spheres. Their timing was absolute perfection… although, I will probably hold off until the third week in June next Spring. 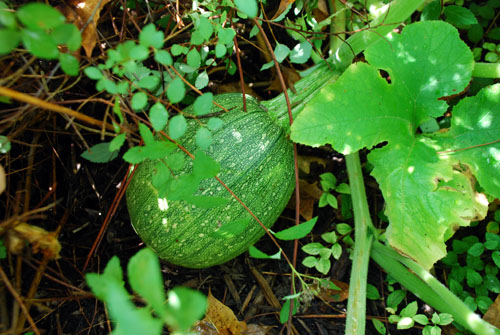 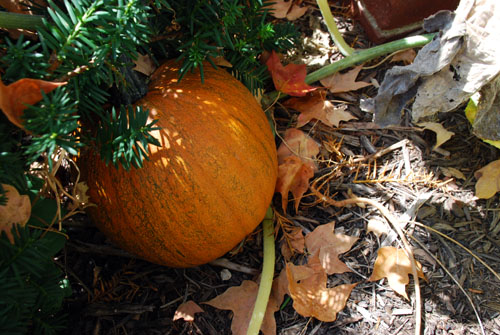 The boys were quite proud, naturally, of the pumpkins they grew. While they had visions of Jack-O-Lanterns, and I had visions of a DELICIOUS pie, we took our parental responsibility to heart and Dad carved these cute little Jack-O-Lanterns. Still, I salvaged what I could from the cut pieces of the jigsaw teeth, eyes and nose to cook down for a mini pie. Of course, I saved the seeds to roast too. 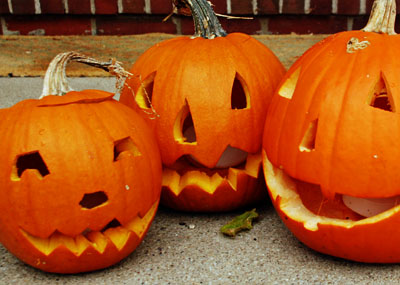 At least the kids aren’t the only ones to enjoy these pumpkins.Â  The ants, unfortunately, are too. 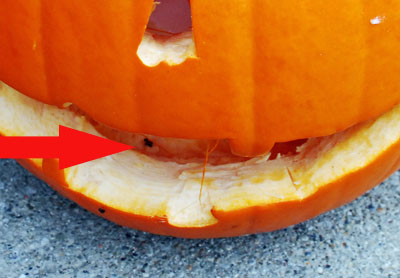 Make Yourself This Little Origami Dress
H...
Overheard at the Ballet
...
First Day Haiku
W...
I Said No
...
I Need A Hug
T...
A Miserable, Blustery Day That Called for Nothing But A Cup of Tea
I...
Share on FacebookShare on Twitter
clean, Gardening
4 comments to “If you insist, we’ll carve these pumpkins”