This is self-portrait of a very frustrated child. 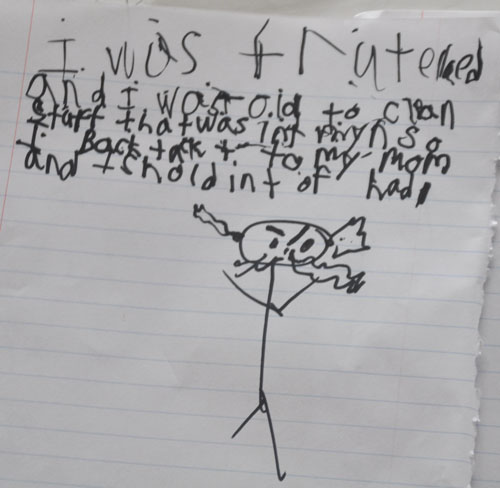 He was not “fruted,” he was “frustrated.”

Here he is, satiated, after 10 minutes. 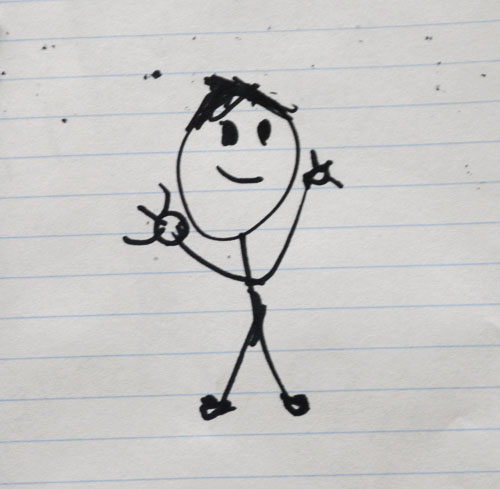 You know one of those rare peaceful moments that comes along, when all the kids are quiet, and you can actually have a cognizant thought running through your head, and you are able to finish one task from start to finish– like scrubbing a pan? Then, like clockwork, unexpectedly, comes that sound… you know:

“Mom, I just wanted to tell you that when I was trying to eat the pancake you made, he was drumming on my back.”

WHAT are we supposed to do with this information? Breakfast was four hours ago, and apparently, there has been no permanent physical damage – so, I am quite tempted to say, “So What?!”

Like a fool, I let my motherly instincts take over, and I start to worry about empathy, and all sorts of mind-wrenchingÂ fates. So, I gently begin to prod and question. I foolishly believe that I will get to the bottom of this and teach someone some valuable lesson about caring and kindness.

My noble pursuit ends up getting me in a tedious, health-defying tizzy. The minute I start the questioning, there is an immediate denial, a counterattack, a change of story, and new evidence brought to the table – all from four children – of which only two were present at the time the drumming took place. Soon, I find that only one child was present during the drumming –

it’s just that he “thought he was going to drum on my back.”

What is the point? I cannot get to the bottom of this — because there is no bottom!!!

We were trying to rake leaves at the lake — and we had no time for this. The fights began to escalate. Grant it – no kid wants to spend the entire weekend at the lake raking leaves, so the fights were inevitable. I was at my wits end. We had no choice but to rake – quickly. Daylight fades fast, and we had exactly one weekend to accomplish the mission – and each boy was determined to fight his way out of raking, by fighting. 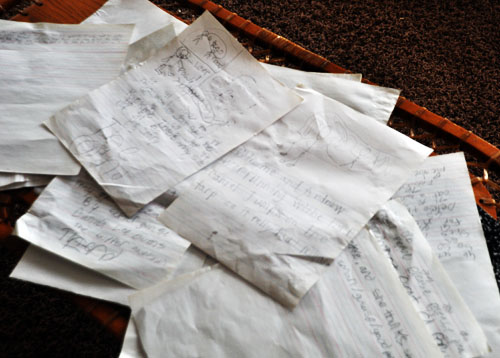 I was running out of options, the sun was moving on its path, not about to stop, so I began to pull out paper and pencils, and asked each party to begin writing. As a writer, I’m no stranger to the effects of writing therapy to heal our emotions – so out of desperation, I hoped this would work. Reasoning was getting us nowhere, except insane.

For about 90 minutes, I did nothing but grab paper, chase kids, read essays and count words. I raked about a total of 10 leaves during these moments. I was getting nowhere.

We went through a lot of paper.

How They Broke The Rules: 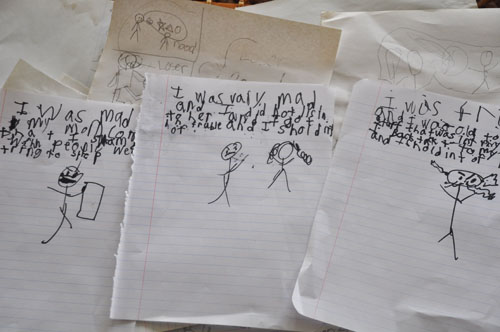 The results were quite miraculous, and unexpected. After about two hours, I looked around the yard, and saw every boy raking – and there was no fighting. I gasped. I saw a bit of teamwork between two of the boys who were fighting the most. We finished raking before sunset. And no one seemed to feel as if they needed to cry foul on child labor laws.

The rest of day and evening seemed to have a different rhythm – a “cooperative rhythm.” Â They even had time, and wanted to, Â play football with the neighbors. This is rare. Four boys rarely want to do the same thing at the same time, together. 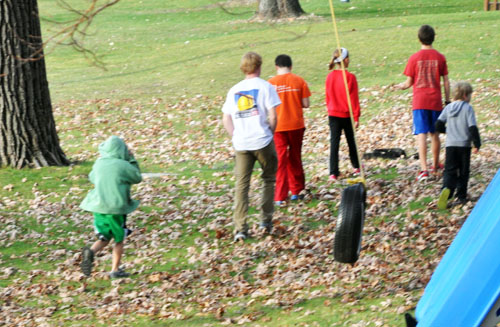 Just ignore those leaves in the photo– they belong to a neighbor who was absent during the leaf-raking marathon that most have us participated in.

The second a whine came, or a fight broke out, I would simply say, “25 words, and a drawing.” Â At this point, they knew, there was no point in resisting – and maybe they were not resisting because this was “therapy.” They felt better when they were done writing – and felt no need to scream, cry or complain anymore. 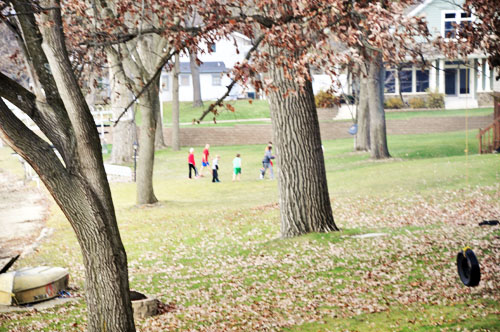 In the car ride home, I collected more essays about:

He Made The Team
Shhhh, Mom
T...
Spidery Feathery-Wreath
T...
On Any Given Tuesday
&...
The Family Photo Wall
U...
Transcendence Leaves Us With Just Enough
...
Share on FacebookShare on Twitter
clean, Laugh, Life, Try This