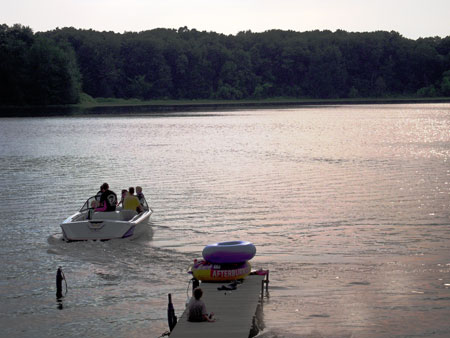 I’ve already done three “first time ever things” for my 46th birthday today — two of them I will only tell you over a very goodÂ bottle of wine. .. maybe. Here’s the third:
It should come as no surprise that my husband, the Ironman, is into all kinds of adventure sports.Â  One of them is water skiing.Â  Not just any skiing, of course, but slalom, trick and barefoot.Â  This type of skiing requires high speeds — 30 to 35. Pretty fast for a boat. Pretty fast for someone who only learned how to drive the boat a week ago.Â Our lake is only 90 acres, so going at a fast speeds requires lots of turning.Â  My husband explained:

When I swirl my hand above my head (the boys are spotters) that means it’s time to turn.Â  And when you turn, do a 360, and go right back over the wake you just made.

There was a lot of leeway in his instruction… how tight do you make the turn?Â  Very tight, he said.Â  Do you speed up or slow down going into the curve, into the curve or going out of the curve?Â  My head was spinning with questions, and he jumped out of the boat and pulled on his skis.

The good news was that the lake was empty.Â  The bad news was that by then, everyone was sitting on their porches watching.Â  With my husband in the water, he gave me his thumbs us, and kept his instructions in my head.

Except this:Â  My kids, who were watching Dad would see him give me the signal to speed up.Â  When they said, “Speed up Mom, theyÂ  — all four of them — took their eyes off Dad and started watching me.Â  This made me nervous, because I was getting really close to the woods on the other end of the lake.Â  I was sure I was going to crash right into the bank, but the kids insisted Dad didn’t say it was time to turn yet.Â Yet, everytime I asked, “Is it time to turn,” all four heads were looking at me, instead of him.

I turned anyway… a tad sooner than he would have liked.

My “tight turn” was “tighter” than his, and I swear I was going to hit that ramp that was dangerously close in front of me.Â  Boats are different than cars.Â  Later he told me I didn’t need to turn that sharp — actually it wasn’t really a 360, it was more like a 270 with an angle back to the wake.Â  Thank you for that clarification.

Still, determined, I pulled him up again and again. Three times. Or was it four. My hands were trembling the entire time I was trying to maneuver the boat, and I thought my heart was going to beat out of my chest. And my kids were staring at me the entire time — like in my face. Every time we came towards shore, I was convinced I was going to hit the bank, and that no matter how sharp I turned the boat, I wouldn’t make the turn. Still, if I made the turn too sharp, I’d lose my skier.

Three times was enough.Â Still, part of me was looking forward to doing it again tomorrow morning. 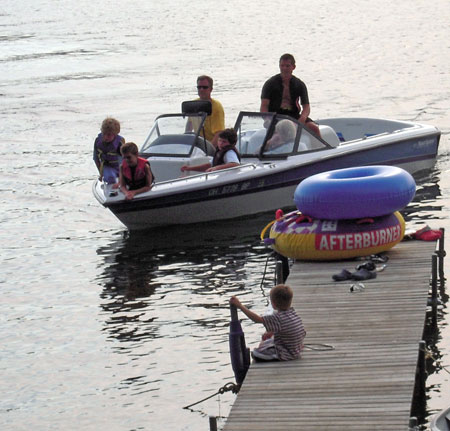 Later that day, one of our neighbors came down, an avid skier himself,Â said, “I’ll be happy to drive your boat for you tomorrow morning… it looked like you were having some trouble outÂ there.”Â  My husband said thatÂ would be great, as “she’s really not used to it yet; her first time and all.”Â  I was … relieved.

In other firsts, my savvy kindergarten graduate went tubing today, but this isn’t him. This is his younger brother and his older brother.Â  I didn’t get that shot… 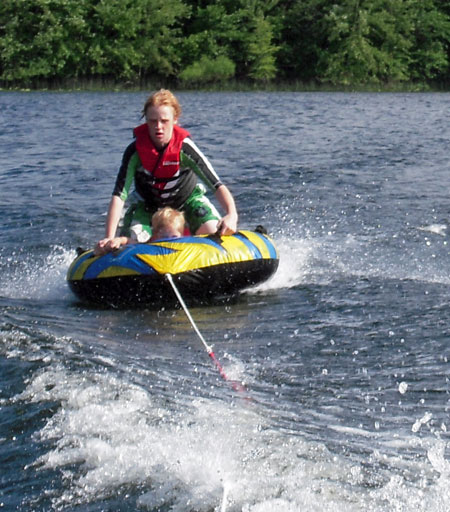 and our four-year-old caught this cute baby Grass Pike fish with his hands. 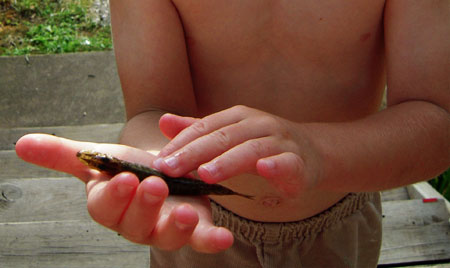 Then, that kindergarten graduate (I still can’t get used to calling him a first grader) caught this HUGE fish. 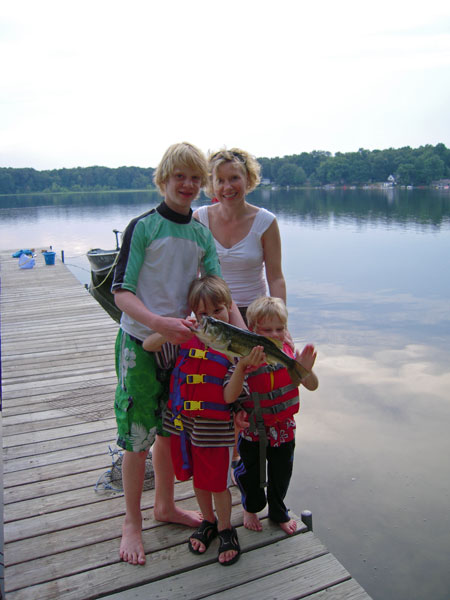 Oh, and I’m so very glad my husband is here.

(Oh, and I just have to say, the reason my second son is not pictured, is because he was back in the boat fishing, trying to top this fish from hisÂ kix brother. You can see the edge of his red canoe between our shoulders.)

Momzillas and my drive to the lake
I...
As I Watched the Worry and Stress Disintegrate Before My Eyes
I...
Queen of the Nest
M...
Sixth Grade Camp and the Pile of 6 Jeans
I...
Like a movie star's jewels
I...
The Sound of the Water When The Wind Blows Across the Lake
...
Share on FacebookShare on Twitter
birthday, Laugh, Life, the lake house
18 comments to “I think he was trying to find a way to drive our boat”