Today, there was a pile of writing that needed my urgent attention, so the fact that it was a dreary, gray Monday only made the task of setting down and rolling up my sleeves that much easier. The glow from a lamp in the house around 10 in the morning is poignantly beautiful, plus, all the dust and grime are incognito on a cloudy day. Something a sunshiny day is all to quick to reveal.

Today was a day for comfort foods. I made myself a pumpkin spice chai tea latte. (Did I write that in the right order?) I was inspired by this pin on pinterest, which of course, is for coffee.

For the tea version, I simply made a cup of hot chai tea, added a teaspoon of canned pumpkin pie mix, some nutmeg, cinnamon and allspice… and I was all set.

After school the kids begged for apple cider, warm, and cinnamon toast. Â (They are still loving my nut/flaxseed cinnamon mixture… thank my lucky stars.) I even pulled out the food processor and ground more walnuts and made another batch cinnamon sugar stuff — two quart jars to get us through the winter.)

For dinner, I pulled out a whole chicken and boiled it in water, with veggies and spices to make chicken soup, before cooking the chicken in the oven. (Remember… make two meals at once from one chicken?) Â Our biggest dilemma tonight is deciding whether to have the soup, or just eat the chicken with rice.

I hear it will be sunny tomorrow… so today might be the day to whip up some snickerdoodle cookie dough to last us through the week… as I’ve already got the nuts ground-up and ready to go. 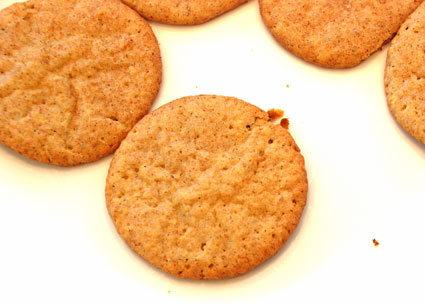 Because I think, we should have dessert every, single night.

Everything Except The Eggs
I...
Why I'm Still Feeding Sourdough Starter: English Muffins
I...
Sourdough Buns
I...
Olympic Bonding and Food Fest
O...
Food. It's All About the Food
I...
Good Strong Word Cookies
Y...
Share on FacebookShare on Twitter
Eat