This house is full of boys, unbloomed testosterone, craziness and messes. Where birthday cakes are artfully adorned in the way that will generate the most laughs. 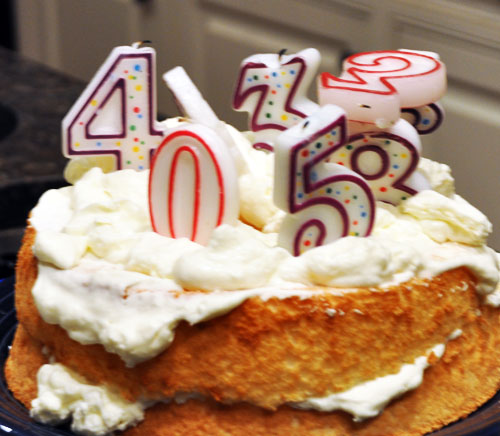 Yet, on one night, his birthday, in came a flurry of pink and white and ribbons and grace. It was a surprise, to all of us. The sign she made, and wanted us to carefully place it in a spot where he would see it, “as soon as he woke up in the morning,” with the caution, that the wild and rambunctious friends, who were still there roaring through the house, would not lay eyes on it.

This was the clandestine conversation held on cell phones, and later at the front door, while the little brothers pattered through the house, asking “Why is she here?” while the older brother carried on down in the basement, unaware. The little boys held the secret. 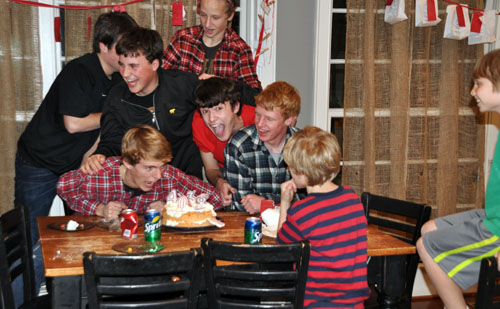 The snow was falling… it was getting late, and we both feared that the wet snow would destroy the markers on the sign. So, she left it here, with me, in my keeping, where I hid it under a rug until all were asleep.

We waited for the boys to leave, and I sat in the living room and watched the snow fall so gently, and let myself fantasize about the night when I might have one of these girls in my kitchen asking me if I would like to make cookies with her. But, that’s not for tonight… yet.

Finally they left, and the house quiet again.

I put the sign outside of his room, with tape, so that he would see it as soon as he woke up. She was asking him to a special dance, and his answer hung on the end, as she waited for the sun to rise.

It was 10 a.m., and he missed his morning work out with his team. By 10:30, I remembered how insecure I was as a teen, and I worried for her, as his unanswered response dangled between the two of them. So, at 10:30, I simply said, “It’s time to work on your homework,” keeping the words of that sign back between my clenched teeth.

It still took some time before I heard him hit the shower. I so wanted to text her — I got her number during the exchange last night, and to slam down all those disappointments and sorrows of my own teen years, with this happy message, “He’s not up yet… so stop worrying about why he hasn’t responded.”

But I left it. This is between them.

I didn’t see him again until 11:30, when he came down for breakfast. And finally, me beaming, and ready to burst, I said, “Did you get your sign?!”

Yes, he grinned. But why did you write that?

“You think I wrote that?! No, no no… it’s not me — it was her! She was here, and by now she is probably wondering why you haven’t responded to her — hurry up and tell her!”

“What, she was here? Last night, and everyone knew but me?… Did she meet Rosie?”

It All Started Out So Well...
W...
This is the school nurse: your child's not feeling well
T...
My Climbers
T...
How To Make A Dream Come True
N...
How To Work From Sun Up Till Sun Down
I...
My Post-Christmas Epiphany
A...
Share on FacebookShare on Twitter
clean, Laugh, Life, love stories
3 comments to “I Get Extra Points for Not Texting Her”