Whenever I start to tell someone about what happened in NYC, the story starts to spiral out, adding more tidibits — like the time I actually saw and heard what Â could have been the actual real-life people that were the inspiration for Sienfeld’s parents. They were so loud, and stood so far apart on the street corner, talking at the top of their lungs, that I had to check to see if there was a camera rolling somewhere. This couldn’t be real. So, when I realized there was no camera, I pulled out mine, and pretended to be filming the skyline, as I caught them on tape saying, “We have to go the 57th Street to get CHANNNGE.”

“Because, the man on 42nd Street said we have to go to 57th Street to get change first.”

This was all punctuated by the fact that the man was wearing khaki bell bottom pants, a loud plaid shirt, and a baseball cap that let his gray hair spring out around his neck in a curly q pattern. And she was wearing black tights, black doc martens and a plaid skirt with leather jacket — and enough lipstick fact to leave stains on a porcelian coffee cup on every dinner on 57th street. Â They were cute – tall and skinny, and he walked with his hands behind his back, and took big sideways steps, like a clown. She walked head down, wide strides, with her hair tied in a 1950s style scarf, and a 1950s pocket book purse dangling from her forearm.

So, whenever I show the bit of video of this charming couple to anyone, they all say the same thing: This is the original couple that Seinfeld used as inspiration for his parents. Except, like every movie you’ve seen based on a book — the real couple is far more shocking and amusing. 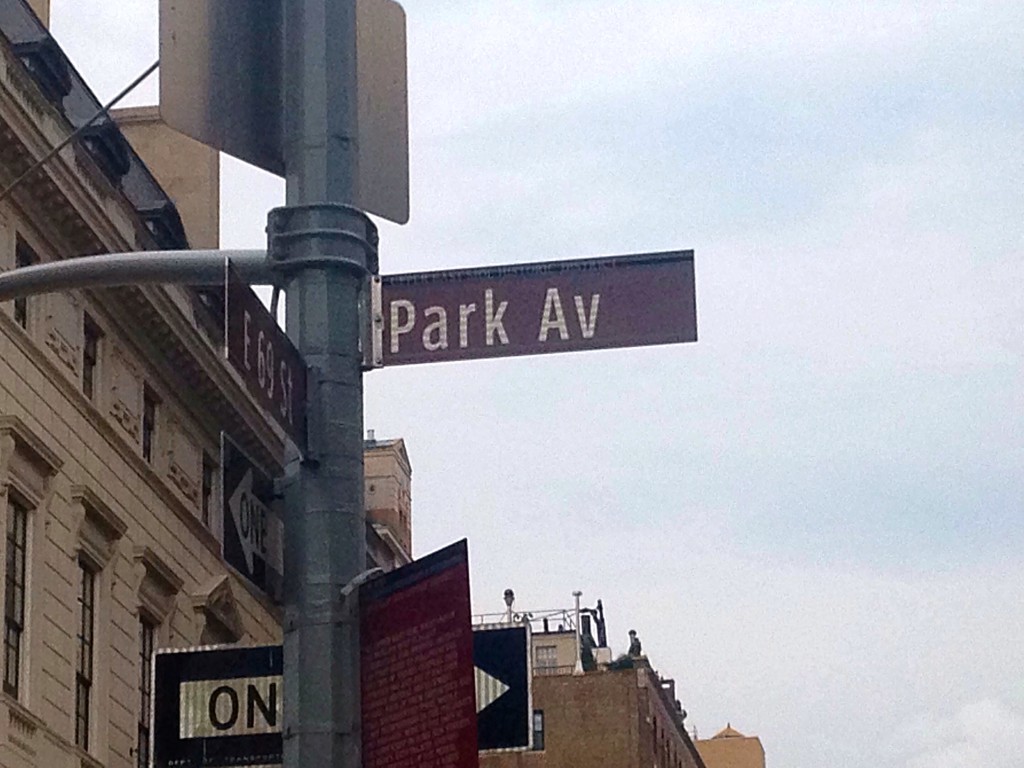 Back to my travel writing: Â I spent quite a bit of time on my own, which gave me quite a bit of flexibility. I pulled out a map, and asked Google to “Explore nearby.” With an electic array of spots chosen, I then proceeded to pick my route so that the journey, by foot, to each spot, offered the most interesting views. Â For example, walk down Park Avenue on the way there, and Madison Avenue on the way back — so that you can see what both streets have to offer. Â Would that plan have gone over well with you? Because logistically, this really made no sense. Well, that’s the advantage of being on your own….because that’s what I did, and I didn’t have to explain it to anyone.

So, as a result, I got a chance to see many of these little underground apartments. This one, all white, was one of my favorites. 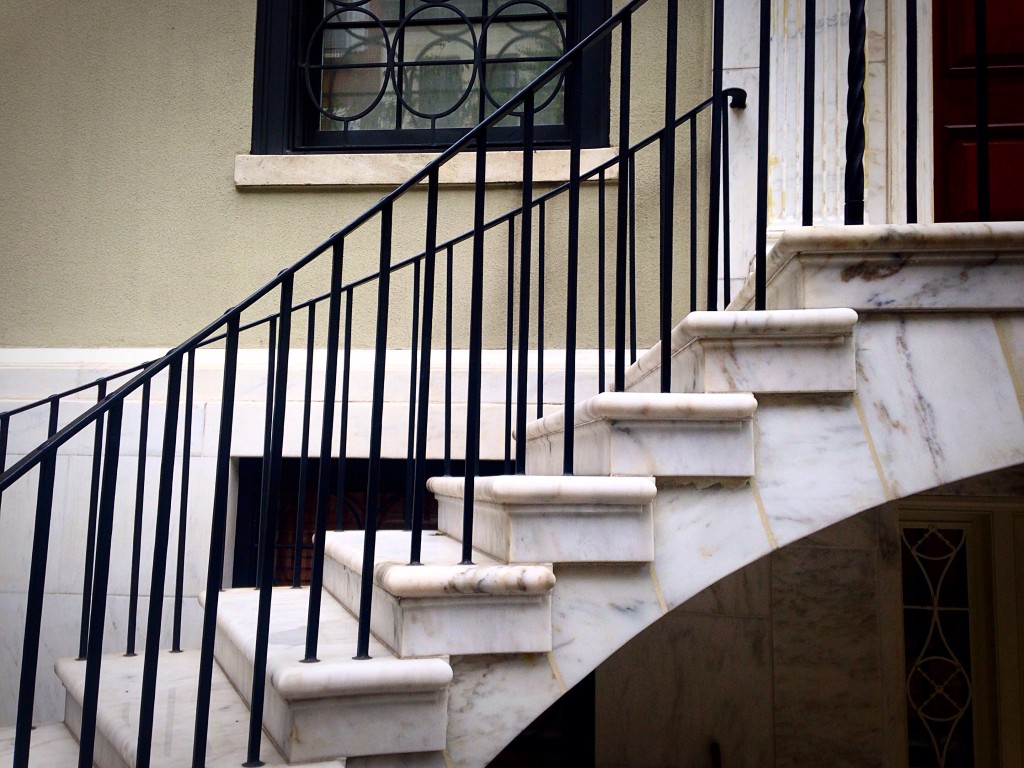 The white marble, set against the black cast iron was so sharp — and the pattern on the security iron over the windows in large circles was so unusual.

But, anyway, the point is, if you remember watching Audrey Hepburn in Breakfast at Tiffany’s, (and why wouldn’t you remember that, as you are walking down Park avenue, leaving Fifth behind you and headingÂ toward Madison Avenue — what ELSE could be on your mind?) she had to walk up a couple of stairs (she counted them) when she was inside of her underground apartment, to reach the door. And her apartment was underground, and yet had this big window, unlike any big window on any basement in the Midwest, where I live. Â I could never understand the layout of her apartment. The entire movie experience for me was a bit off, because I couldn’t establish a sense of place. Was this intended? Because Holly was blind, and she never fully understood her surroundings… But finally, the movie began to fall into place when I saw this: 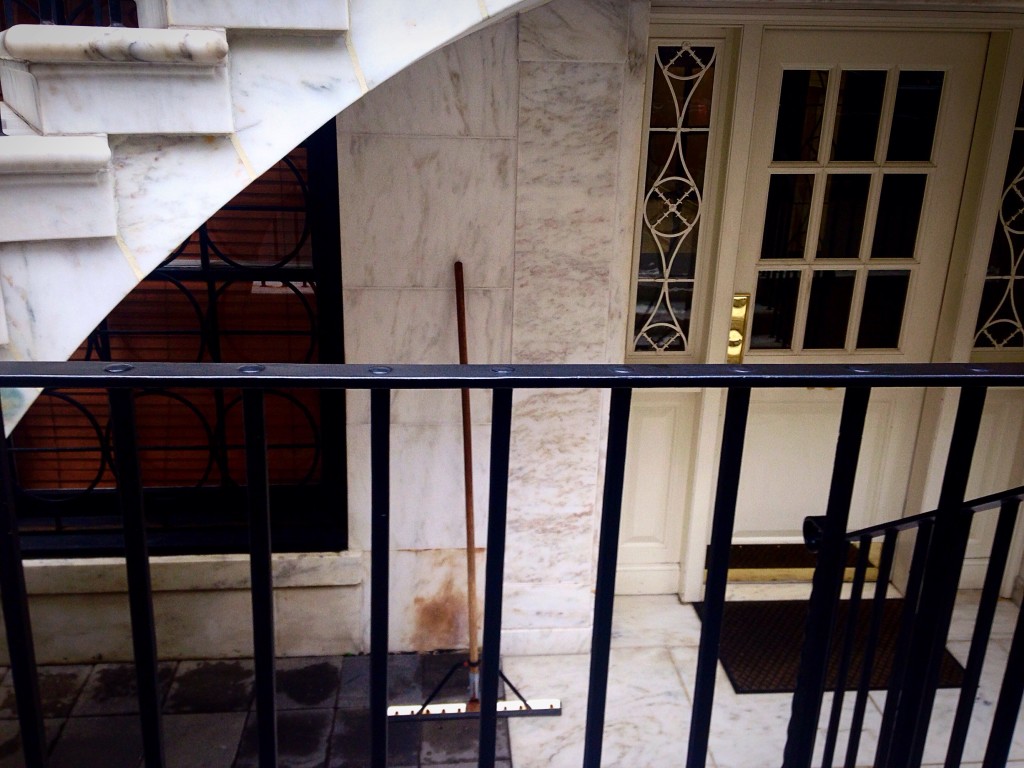 The front door is slightly below street level, while the apartment, revealed through the large window, shows that the apartment is much lower. So, a step up to the door, and a step down to the underground apartment, with a window big enough to feel as if it were on the first level. I can just see Holly stepping out of her apartment, coming out from underneath, to the street.

So with that little side detour, it was like watching a matinee of Breakfast of Tiffany’s, with a new perspective into Holly Golightly’s world.

Deadliest Catch Makes Me Sleep Like a Baby
T...
Doing Laundry, Nibbling Pie Crust
T...
What Brothers Are For
T...
You Would Think, By Now, I Should Have This Down
B...
The Fat-Burning Hot Chocolate Bar/How I Lost Four Inches: Weight Loss Tip 2!
...
An SOS meal that feeds the busy soul
H...
Share on FacebookShare on Twitter
Laugh, Life, travel
One comment to “Humor Me, and Pretend I am A Travel Writer”