The good thing about MP3 players is that now many of them come free with cell phones, giving you the power of the 2GB Ipod Nano with your phone in one single device. The bad news is that Itunes does not recognize most MP3 players and won’t sync the music to the device. Here, I’ll show you how to work around that quirk, and load songs from Itunes onto any MP3 Player in just a few minutes, probably seconds. How do I know this? Verizon gave me a $100 credit toward a new phone, so I picked up The Juke, primarily because it works like an I-Pod Nano. Then, my awesome babysitter showed me how, in 13 steps, to sync your phone to Itunes.

Before you start, you will need to clear up space on your MP3 player.Â  You can do this by formating your phone when you plug it into your computer.Â  Deleting the songs will not really delete the songs, and you’ll have out of memory space. So, just format your phone, following the instructions in your manual. work.Â  know that if you want to clear the tunes memory in your phone, to make room for all the new songs you’re loading, you’ll need to format your phone.Â  Deleting them manually doesn’t work. I’ll show you how to do that below.

First, plug in your phone, or your MP3 player using the USB cable that comes with your device.

The message will pop up on your screen that says new device connected. Then, a window will appear asking you “sync digital media files to this device.”

Ignore this, and click instead, the folder above that line that says, “Open Device to view files with Windows Explorer.” Click OK.

Then you will see a gray box that says “Internal Storage.” 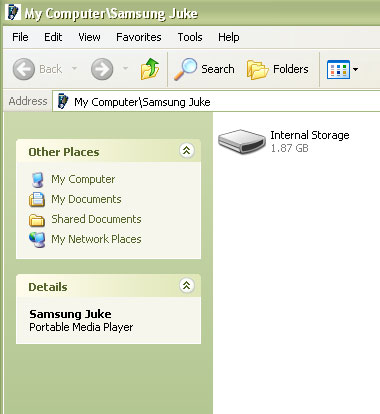 To format your phone (and delete the existing music files on the phone) right click the gray picture and click format.

Once complete, click this gray box to open the file.

Now you will see a folder named “music.” Click the “music” folder to open this folder.

If your device already has music loaded, it will appear here, otherwise, the folder will be blank. Leave this open, you’ll need it in just a few seconds.

Now, on your desktop, create a new folder named “MP3”. Leave this open.

Select the tunes you want to import, and physically drag them with your mouse to the new folder you just created, “MP3.”

While it’s copying these files, you will see that familiar windows graphic of papers flying out of a folder. Wait for this to complete. 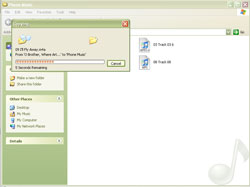 Once the files are all in the “MP3 folder”, drag them to the “Music” that goes to the “music folder” of your MP3 player. Again, that familiar little windows icon of papers flying will appear. Once it’s done, the songs are now loaded on your MP3 player.

There’s something about creating that “extra folder” that acts like a buffer, so that the MP3 player no longer thinks they’re coming from Itunes, but simply from files on your computer … which they are!
Simple.

Beginner's Luck
...
How To Pin on Pinterest
I...
Mmmm Mmmmm Good
...
Thirty People Heading To A Regatta
I...
How To Re-size Google Doc Videos To Post On Your Blog
I...
No Carb Pie Crust
M...
Share on FacebookShare on Twitter
Life, Thursday 13, Try This
23 comments to “How to sync your MP3 player to ITunes”