There was a point during the first traffic jam, when our ETA moved to 9:45, instead of 9, that we came up with this ridiculous idea that our arrival time might be as late as 12 a.m.

Never in a million years would we have believed that we would actually be pulling in at 5 a.m. How is this possible?! 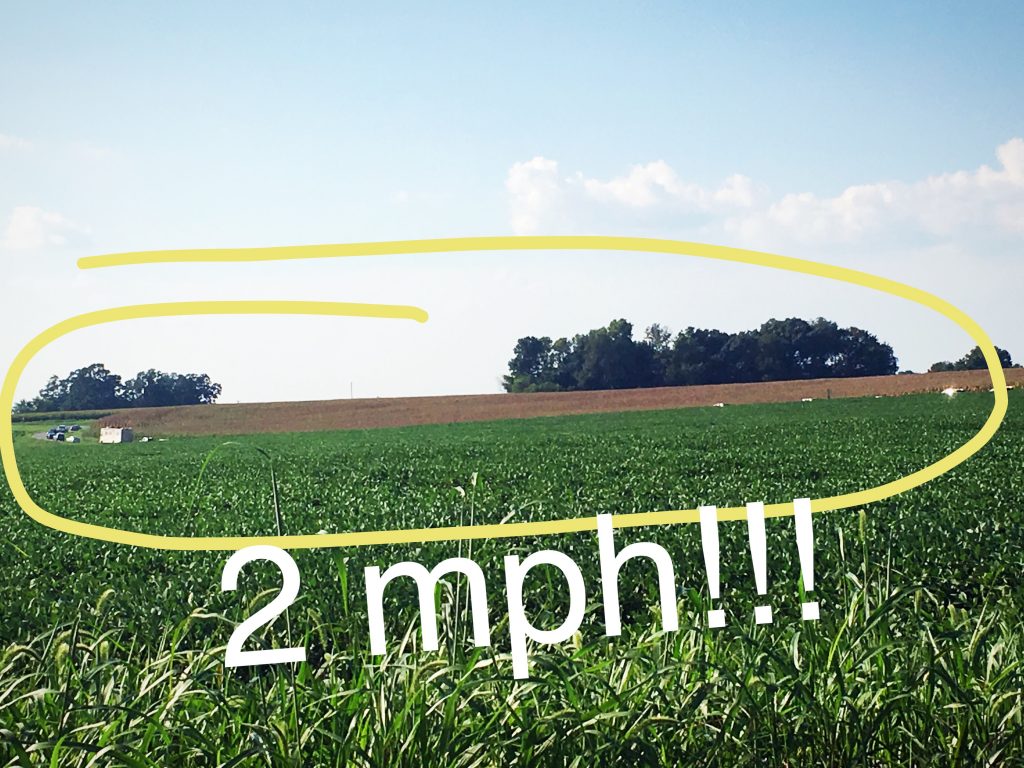 We left our eclipse site about an hour after totality, trying to beat the traffic.  The eclipse was still “technically” happening, but we had seen the most spectacular part.

The one phrase I hope you never hear is the one Google Maps uses in extreme traffic jams is, “Traffic is getting worse.” While the phrase should be commended for its reliability – it falls short of applicable, hands-on, positive solutions and remedial actions. The reason? There aren’t any. In this case, Google throws its artificial intelligent arms up in the air and just says, “Traffic is getting worse.” And then adds more minutes to your arrival time, while you sit and wait, powerless.

There were times when we were directed to get off the highway to take the “faster route,” which winded through country roads, farms and cows bathing in water. (Missed that photo op, as the cows were literally standing in water that went up to just below their necks.) The only infrastructure that reached to the sky was the galvanized metal silos. The property owners came out with their cell phones and took pictures of the cars, as vehicles, with plates from all over the country, filled up their roads. The entire world was driving across their front doors. This line of cars stretched for miles among the tobacco and soybean fields. The road seemed to snake its way along, as if it were matching the winding path of the rivers, as we inched along like snails, barely breaking 2 mph. 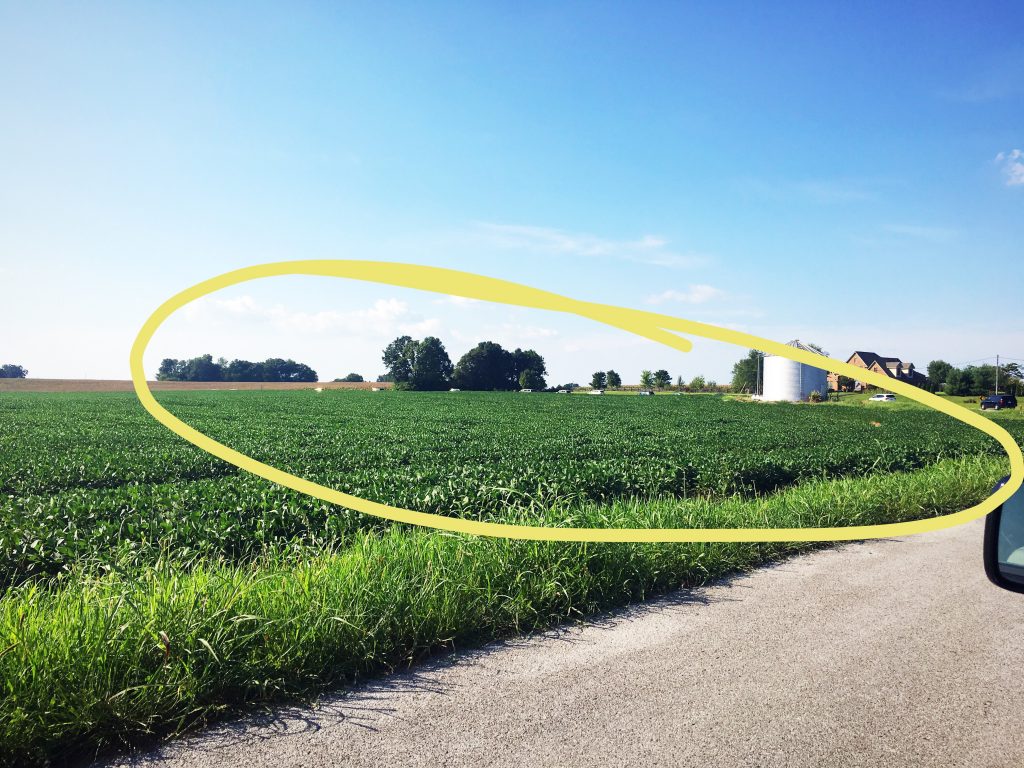 It seemed that everyone got the same tip about the “faster route.”

So, we decided to outsmart Google – the next time it offered us the faster route, we’d stay on the slower one, and let everyone else leave. But, great minds think alike. Even if we could inch our way up to the spot to make the detour, half of the masses were thinking along the same line. Soon, we realized the solid truth: there was no way out of this, no matter what shortcut we did or didn’t take: there were just too many cars in one place.

Of all places to lose service, it was while we were stuck on “Hickory Flat Rapids Road,” an actual name of a road. I tried to make a call to my husband, who was still back at the hotel for scheduled meetings, to guide us off out of this nightmare of a mess — but of course, our call kept getting dropped.

Normally, I look forward to long stretches of time in the car so that I can have a few minutes to sit still and catch up on my reading or do some client work. But the traffic was so nerve-rackingly slow, that it kept us in a state of anxious anticipation, looking up to see what was causing the delay. I think this might have been the first time in my life, since I was a baby, that I sat and did absolutely nothing, for so many hours. There was this perpetual tense feeling that in just a few minutes, you’d round the bend, and we would finally see what the big mystery was that was causing this horrible delay – and then it would be resolved. And finally, we’d get to move above 20 mph. But that moment never came.

I guess misery loves company. It was because we couldn’t concentrate on anything but the traffic, that no one had their headphones on, and our heads weren’t buried in books. This meant we were all listening to the same music and we all watched the minutes keep piling up on our arrival time together. We shared the agony of every single, “Traffic is getting worse,” together.

And because of, or in spite of, all of this, somehow, we laughed all the way home. In fact, we couldn’t stop ourselves from laughing — at the ridiculousness of the highway nightmare, we were suddenly a part of.

We found the Hawaiian buns I had accidentally been sitting on, and pulled the ham out of the cooler and made sandwiches and passed them around. There were gas stations we had to pass because the lines of cars were just too long. Sometimes, it looked as if it was suddenly 1950, and half the town had pulled out their roadsters to sit and hang out at the gas station. If I didn’t know better, I would have thought it was one big party going on at that gas station. honestly looked like one big party. 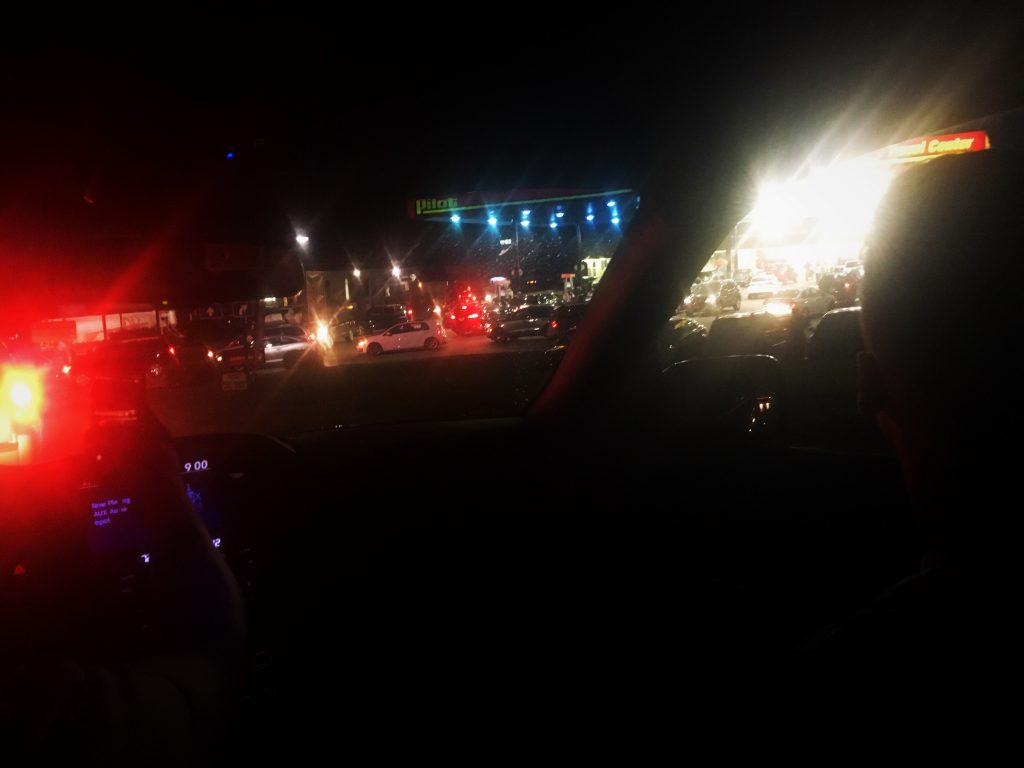 Just like the eclipse that put us in this mess, there were some very dark moments of totality. I don’t think I’ve ever heard my boys in as much agony as when someone two cars in front of us let 20-30 cars go in front of us.

I tried to carry to torch of positivity — like, look how grateful that we’re not changing a tire like those people – and we aren’t in an accident. But when the railroad crossing signs came down again, you are left sitting with the echoing sound of your “Polly Anna” hollow words echoing around the car. Someone finally says, “this is worse than the guy who let in those 30 cars.”

At some point — you’re better off just acknowledging the darkness and accepting the reality for what it is.

When you are tired, and you just want to get home, it’s tough to imagine how you will possibly ever make it through the endless miles, minutes and hours that the GPS is now announcing. Worse, you are suddenly at the mercy of every travel mishap, and you realize the only thing that’s going to happen for sure is this: it could be even later.

It was inevitable: someone finally said what we were all thinking: “The Eclipse was not worth this.”

But, the sun might have heard us, and ended its appearance of the day with this wild streak – and we put on our eclipse glasses to have a good hard look at the sun one last time for the day. 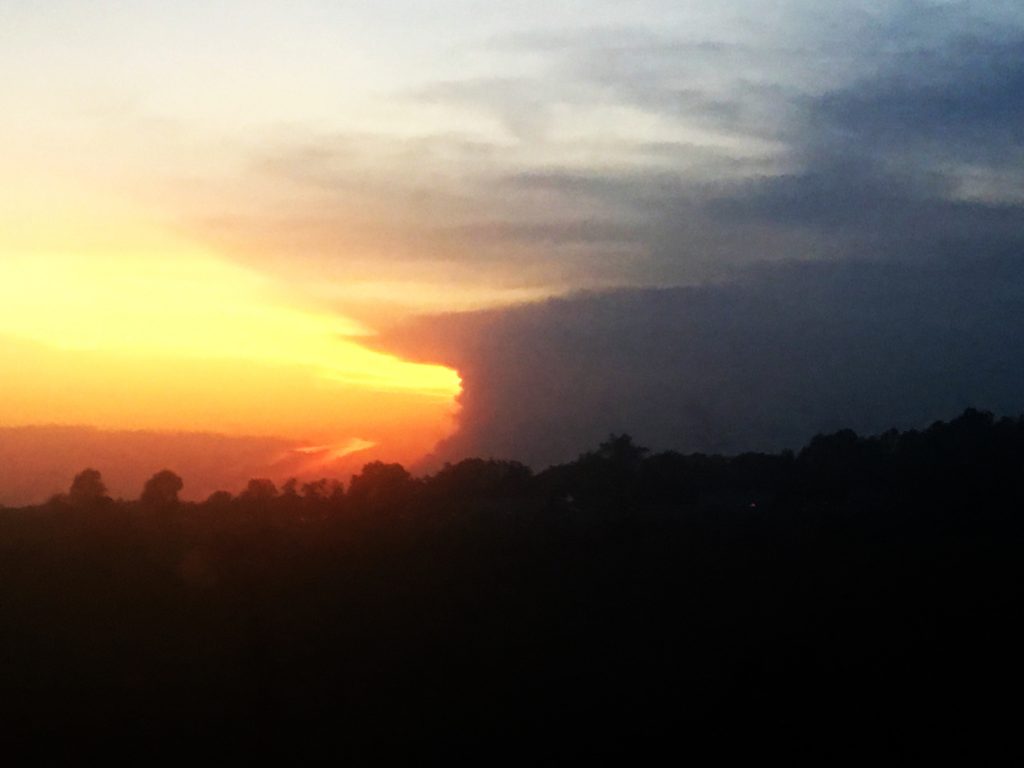 The laughter started again, and the darkness seemed to slide away. 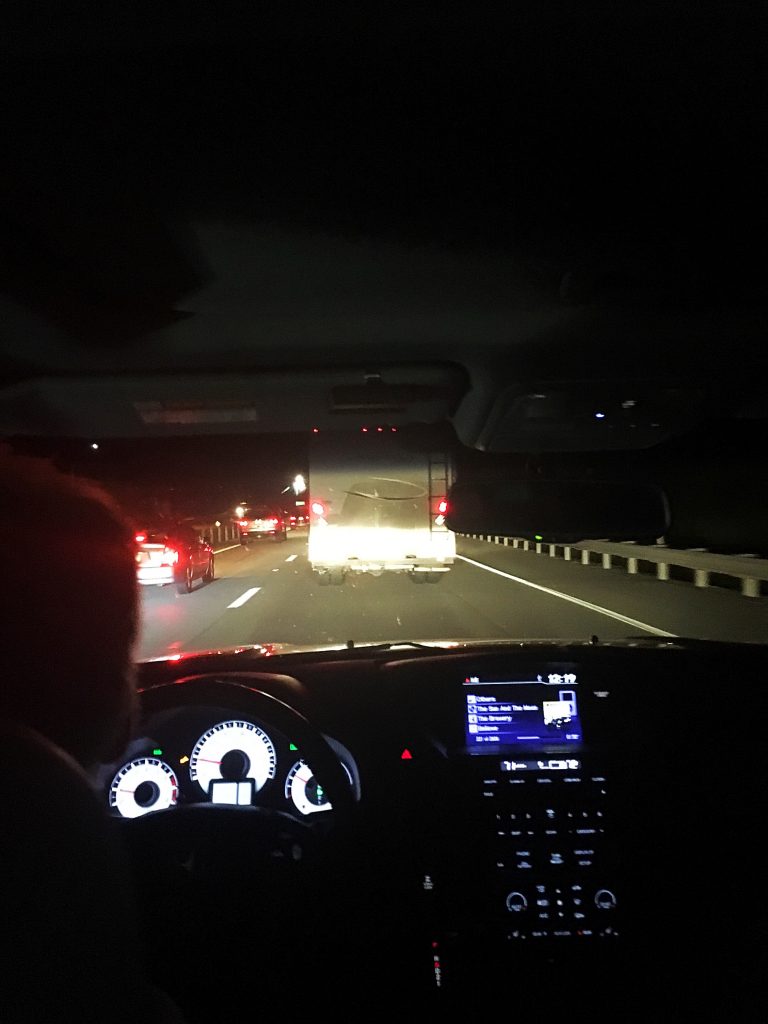 We finally made it to the college, and when we dropped him off, it was around 2:15 a.m. Traffic had been clear for the last 12 miles to there, and we expected to get back on the somewhat empty highway, and make it home around 3:40 a.m.

What kind of traffic jam happens at 2 a.m.? That’s the beauty of traveling at this time of night (morning). Now that we’ve paid our dues, we deserve all the benefits that come from being persistent and plowing through all of this awful traffic — not stopping for a hotel and waiting until the morning. Right? This is the reward for being tough and making it through.

We soon learned that we were not alone on the roads after all. Far from it.

The highways were still full of eclipse viewers from all over the country. We hit another dead stop, and our arrival time jumped to 5 a.m. — just like that.

And would you believe, that when we finally pulled off the highway, to drive home — a train came. And we waited again at a point that seemed mere inches from our beds.

But later that day, we were ready to talk about the eclipse again and marveled over our videos, totally enraptured and in awe over what we had experienced.

And like one of the boys said the next day, “I don’t think I was ever bored during that whole entire car ride.” Heaven…

They say watching a total eclipse is a life-altering event. This may be true — because I’ve already seen how I no longer look at shadows the same way anymore. I pay attention to them, paying attention to the shape, and then wondering what the sun might be doing to cause this particular shape. More importantly, I’m noticing subtle changes in daylight, for clues that something profound may just about be ready to happen.

Travelling to the eclipse was more of a surprise. Shocking, yes, that traffic could actually be that intense —
but I am more surprised by what could have been a horribly unbearable experience, left us all laughing with stories we will remember for the rest of our lives. 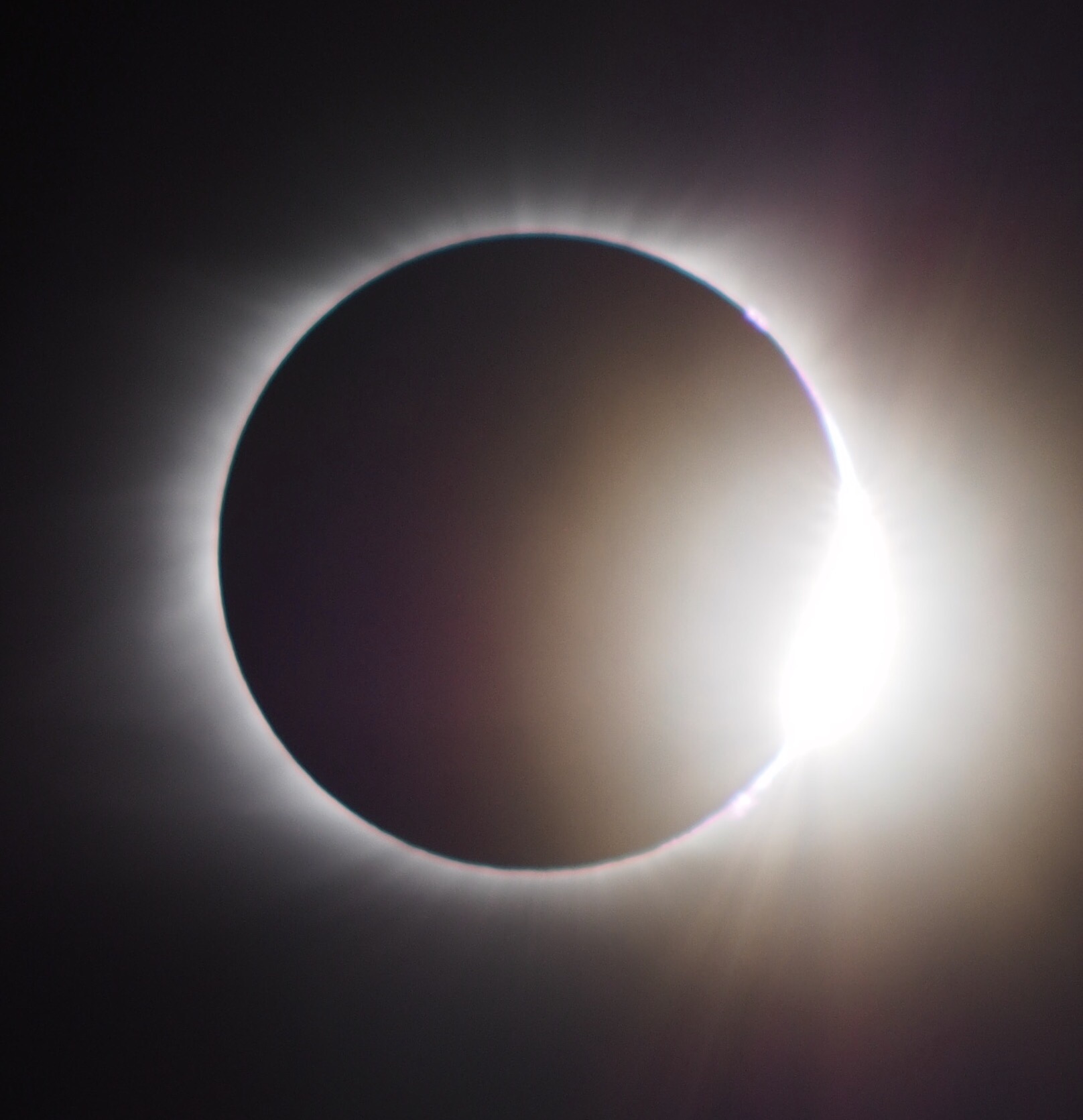 He's Coming Home
T...
While Daddy's Not Looking
W...
A Brandy Cordial for The Holidays?
H...
Basil Salt: The Convenient, Tasty Way To Preserve Your Basil
...
How To Cook Dinner on A Dreary January Night
O...
Twisted Path to the Pot of Gold
N...
Share on FacebookShare on Twitter
clean, Laugh, Life, memories
2 comments to “How A Bright Little Eclipse Passed Right Through Our Car”