I asked them questions all the way through the movie, and the experts, my boys, patiently doled out character names, villians, and even character histories under the hush of the soundtrack of the movie.

How I missed Bane, as the villian in the series, is a mystery to me. Since 1998, Batman, in some form of attire or another, has been living in our house. I kept asking for the familiar faces — where’s The Riddler, The Joker, and The Penguin? But this Batman tale took us far deeper, into the vintage comic book series, where Bane breaks Batman’s back. 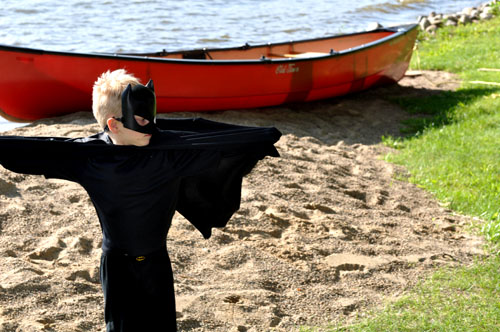 Catwoman and Alfred were there… I had some sense of familiarity with them on the screen — but this was allÂ unchartedÂ territory for me. And the boys were patient.

Just when I got it all figured out, and the movie was just about to come together — the sound went out. I mean the movie kept playing, but the soundtrack of the movie began to sound as if it were twisted up in some kind ofÂ archaicÂ tape recorder.

We could not make out a word of the dialogue. We were at the ending… the final climax, when everything was coming together, my heart was invested in the outcome.

Not a word… and it went on like that for ten minutes.

And that was it. The movie was over. We walked out… and the ushers were handing us vouchers to come back a watch “any movie” at “anytime.”

So, basically, I just invested 2 hours and fortyÂ minutesÂ in a block buster movie, and I have no idea how it ends. I have many, many questions, that even my boys couldn’t answer:

And don’t even bother to tell me the answers. I want to see it unfold… the way I’mÂ supposedÂ to see it.

But, where am I going to find another 2 hours and forty minutes for that?

Snow Shorts
T...
Here Comes The Sun
R...
Christmas: I Dropped the Ball
T...
That sun can play tricks on you
Ã...
It's all fun and games until somebody gets hurt
...
Where the Broken Tulip Came From
I...
Share on FacebookShare on Twitter
clean, Laugh
One comment to “Holy Unidentified Ending Batman”