I will start by saying that it’s been a rough 24 hours, and I’m tired.

When he fell, I turned the boat around, and instead of seeing his eyes looking across the water for the rope, I saw his head tilted upwards eyes squinting shut, and he was reeling in pain. I held my breath, and willed him to put his head back down at water level, open his eyes and reach for the rope. He couldn’t. He was in massive pain… but he couldn’t speak to tell us what it was. The water, so fluid, can be as solid as a brick wall. 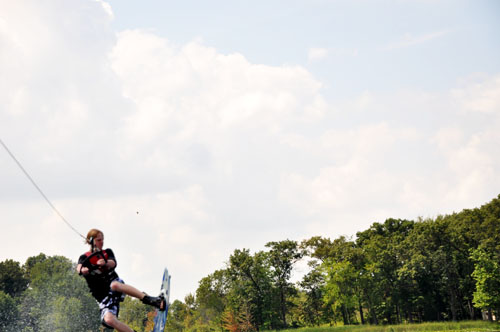 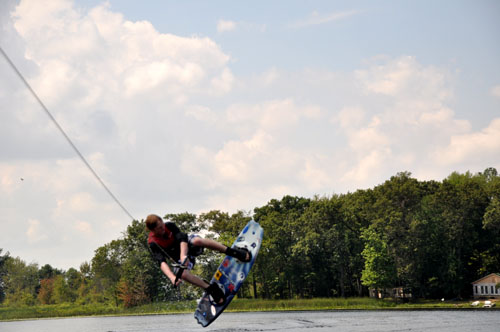 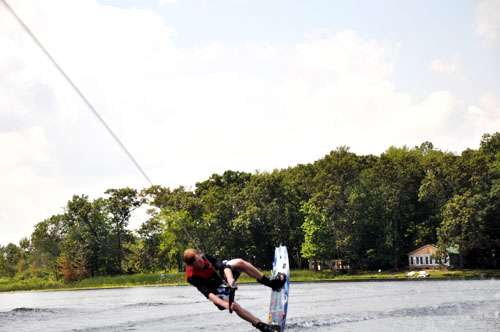 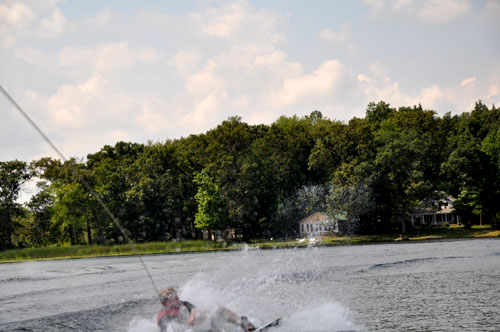 The water was unusually rough; but this never bothers the boys when they ski. A fact that never fails to leave me in awe of their skills. I was driving, and his brother was the spotter, taking pictures. He wanted to break in his new wake board, and get some air. Instead, in the moments that followed, his brother and I somehow managed to throw the rope close enough to him and coached him to grab the rope, while we pulled him in. “Can’t get my bindings off…” was all he kept saying between sobs of pain. Through some Herculean effort of adrenalin, I pulled my oldest son, bigger than me, still attached to his wake board, out of the water and onto the boat platform. Then, somehow again through an effort I can’t recall, we got him into the back of the boat, learning at that point that the pain was radiating from his leg.

I scanned the lake, saw no other boat, and drove fast (as my son kept screaming to do) straight to our dock, and miraculously, parked the boat like a beeline, straight, perfectly and effortlessly, into our dock.

My son ran for help – we had to get the bindings off – and we found a man with a Phillips screwdriver, who laid my son face down on the boat, and worked on getting the bindings off his foot.

I drove the car from the top of the hill, down to the dock, and was ready to pick user him to urgent care… my mind spilling with what-ifs – everything to the soccer camp that starts this Thursday, soccer try-outs on the 27th, and if he would have a life-long injury.

Without even a request for help, several people offered to watch the other boys. No time to argue, I left to let them all fight out who would have them. I drove as fast as I could… my son wishing it wasn’t so far. Fifteen minutes. “This is what life is going to be like now,” I thought, looking over at my son. “I have four boys. As much as I can’t stand what’s happening right now… this is reality.” As hard as I tried to relax, I could not get that scowl off of my face.

He was still dripping wet with water, and started to shiver.

He said he heard his bone crack. Thinking of how the sound of the waves and the boat engine should have drowned out that sound, a shiver went down my spine too.

At urgent care, he was seen right away. Mercy came in the form of a Nubain shot –Â  just so he could endure the x-ray. He was still shivering… they gave him one blanket… but my request for another was delayed. The shivering was hurting his leg even more. I couldn’t endure his sitting there shivering, and in this pain, so I went to the hall and got his own blanket. After 20 minutes, the shot offered little relief, and we went ahead with the x-ray.

I used the break to check on the boys, and decided it was time to send them to a legendary friend’s house for dinner — if she didn’t have them already.Â  Later, she told me, “God told me to buy extra food this week, and I did.” You can’t imagine how great of hands the boys were in.

All the while, I’m sitting in a waiting room of urgent care doctors, wondering if I can trust these doctors, and where I should go for real help. Lots of cell phone calls to my husband (he works with doctors) gave me some names… and it turned out that the Urgent Care Facility was already working with them – they would be reading the x-rays by computer.

His right tibia is broken. But “not separated” are the operative positive words here. It is going right into his growth plate, so an orthopedist will be seen on Friday.

A boot, not a cast, was placed on his leg…, which instantly relieved much of the pain.

Vicodin was given for pain, which, my son says, “isn’t working.” I swear my own experienced with Vicodin leads me to believe it is truly a stimulant. At 4 in the morning, with my son still awake, I am convinced this is the last thing to take for pain. In retrospect, in my now bleary-eyed state, I should have been adamant about requesting something with codeine.

Yes… his summer is ruined; at least the way we all thought was going to be. But, if things go as planned, his first day of school will be boot-free. Still, I have to remember just how lucky he was. Things could have been worse. Also, thinking just how grateful we are to be surrounded by so many caring friends.

Graduation is Saturday
T...
Win 25 Cards from Shutterfly: Photoshop/Shutterfly Tutorial
E...
How We Arrived Fashionably Late For Dinner In New York
T...
How To Host a Reverse Surprise Birthday Party
F...
I Saw You On The Playground
I...
The Bones Came Together Nicely
H...
Share on FacebookShare on Twitter
clean, the lake house, Try This
12 comments to “He Heard His Bone Crack”