So, Heinz and Campbell Soup raised their food prices, even though fuel and product costs dropped.Â  Time to start a garden. I’m giving away seeds.

Growing up during the recession of the 70s, I discovered the security of the food industry; even in hard times. “People always need to eat,”Â  my Mom would say as she watched unemployment numbers rise on the evening news; and again when she headed off to start her week on Monday mornings as a bookkeeper at a grocery warehouse.

So, it should come as no surprise that H.J. Heniz Co. and Campbell Soup both reported higher earnings in their recent quarters; a direct contrast to the declines reported across the world. Here’s a sampling from the last week of January, 2009: Gap sales down 13%; Limited Brands, down 8.7%; Kohl’s net drops 18%.Â  Clothes, it appears, are not as essential as food.

Instead of dancing through the corporate hallways, with such high revenues at a time when other companies are cutting staff, Heinz actually raised their food prices by 8 percent, and Campbell has raised their food prices 9 percent in their third quarter that ended by early February, 2009.Â  At the same time, fuel and ingredient costs have fallen. Yet, these savings are starkly missing from the plastic price tags that line our grocery store shelves. Still, in their defense,Â  the food executives say their prices are still behind inflation rates.

An unlikely hero, in what appears to be unfair price gouging, is Steve Burd, a top executive of Safeway, a large food retailer, who is touting the store brands (you know, those generic ones) as the onlyÂ  low-price alternative to the money-hungry food manufacturers’ name-brand food. Those are still a bargain. Steve said,Â  in the Wall Street Journal, (February 27, 2009, B3), “We’re going to chew food manufacturers up on corporate brands.”Â  (What’s not to love about Steve’s choice of words, by the way.)

Of course, growing your own food not only saves you money, but allows you to spread your harvest with food banks, desperately in need of food right now. The Give What You Grow campaign (which I am happy to report is slowly, but surely growing– and to people I’ve never heard of… yet.) has caught the attention of Kristin Grilli, of Burpee, who has given me packets of their Money Garden Seeds to give away. Each envelope contains 6 packets of seeds: 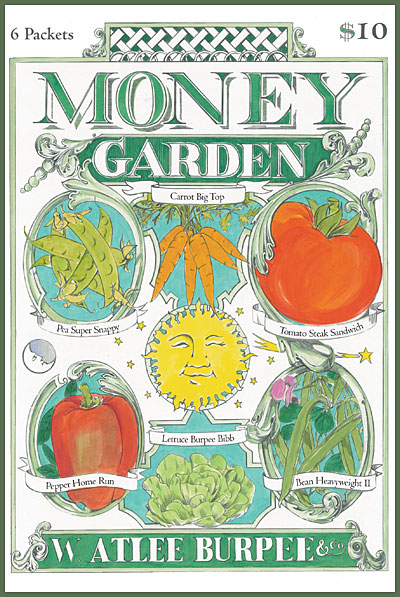 Burpee is selling the $20 worth of seeds for $10. Each pack will produce over $650 worth of vegetables.Â  You can be entered to win your own pack, simply by leaving a comment. (If you have already picked up a give what youÂ  grow badge, you’re already entered.) “Watch your assets grow before your eyes; unlike any stock you every bought,” the package says. To grab the badge, 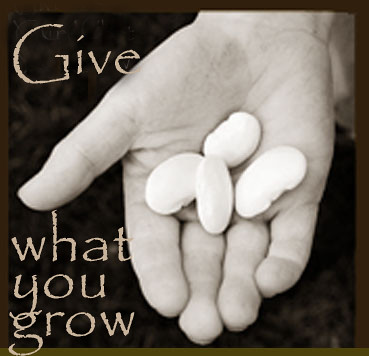 (Replace these [ ] with these <> to make the button appear.)

There's A Mystery Just Waiting To Be Solved -- And I'm Up
L...
What To Do When You Get Knocked Down
T...
Bella Vineyard
T...
Making Kid's Art Vintage: Skittles
A...
I used an iron to feed my kids
N...
The Lovely Present
D...
Share on FacebookShare on Twitter
Gardening, Life, news
9 comments to “Growth Stocks in a Tough Economy”