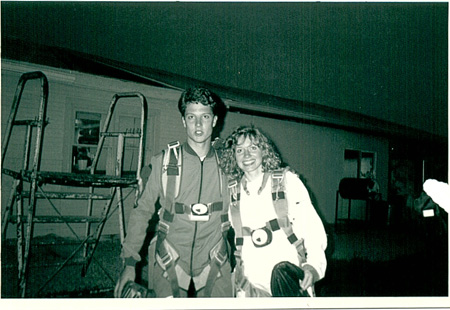 You can laugh all you want at my hair in that picture; but it was 1989, and I thought I looked cool.

On a whim, truly that impulsive, I joined a bunch of friends for a two hour drive to go skydiving. The airport was tiny, and only flew propeller (prop planes). We arrived around 10 in the morning, and the planes were lined up getting fuel, and the professional sky divers were busy packing chutes for the day.

In one tent, there was a class going on for those people who were jumping free fall for the first time, either via a static line, or the accelerated free fall. We were bypassing those classes. We only needed minimal instruction; I was preparing to do a tandem skydive; the skydive that requires the barest, minimalist instruction. You can get your training, and jump — all in the same day! I would literally be going along for the ride with a master skydiver, (someone who has already been certified through thousands of jumps) as I would simply be harnessed to him throughout the entire jump. My master skydiver, Mike, would be responsible for packing the parachute. I had only one task: to pull the rip cord when he said “ready.”

The master jumper can help the novice jumper move through any fear or anxiety that just might creep up during the experience of falling at 120 mph from 13,000 feet.

Our friends, including my boyfriend, and I (now my husband) went through about 30 minutes of “ground prep training.” Parts of the parachute were explained, how to read the altimeter that would be strapped around my neck, and then to sign the “release papers.” I’ll admit; that got me for a second or too. If it was so safe… then, why bother with these release papers? Still, not one to be outdone by her peers, I signed and was ready to go.

I spent most of the rest of the afternoon waiting, and watching my friends, and other strangers float out of the sky. Later, I would often hear this question, “Why? What made you jump?” Looking back, this could have been the time I backed-out, but then, I knew, I would always be left wondering what it would have been like to fall 13,000 feet in the air. I would rather know, than wonder.

Dusk was falling when it was my turn to climb aboard the decrepit-looking propeller plane. My boyfriend and I were going up at the same time… wasn’t that sweet? I was introduced to my master jumper; a gray-bearded, blue-eyed fella named Mike who seemed more like 19 than 65. My stomach started to lurch. I was beginning to become aware that the safety of the earth would soon be leaving my own “force field,” and my hands began to sweat, and I began to take shorter breaths.

When the plane choked several times at take-off, I was starting to feel a bit of relief; maybe we wouldn’t make it up after-all. If the plane couldn’t make it up, I would be spared from what I now was beginning to consider the trauma, of skydiving. When the plane did lift off the ground, it continued its spitting and sputtering, and dipping as we continued out ascent to higher altitudes.

It’s bad enough to be just a tad bit afraid of your first skydiving experience; it’s quite another to add the possibility of engine failure to the ascent of your jump. I was quickly becoming a nervous wreck. A quiet nervous wreck. Still, the master jumpers, and the pilot in the plane were laughing about the old “Betsy’s problems” and were exchanging stories about the mechanic’s latest attempt to swap out pistons… I can’t remember anything else. I shut down and tried not to hear the discussion about the frailty of this plane’s engine’s woes.

I did manage to hear this, though: “At least we have our parachutes.” These men added a whole new dimension to my fear of flying. If anything would happen to the plane; they could always jump out and free-fall with their parachutes. “Safest way to land,” they would say. Interesting thought. Still, I remembered those scenes in my mind of all those master jumpers packing the parachutes. They were laughing; yet so focused on what they were doing. Did they do it right? What if they forgot something?

Miraculously, Betsy made it to 13,000 feet. Now it was time to get ready to go. My boyfriend said, “Here we go, Susie,” and he winked at me, grinning ear to ear. I didn’t need this distraction; the thought that I may never see the love of my life again. You know that feeling when you’re climbing to the top of the first hill on a roller coaster? When that happens to me, I want to get off that roller coaster right then. I really do. The pressure, the anxiety and the awareness of that pending drop is more than I can stand. That’s how I felt right then on the plane. I was paralyzed with fear, and the idea of standing up in this plane to become strapped to someone else was beyond my body’s physical and mental capability.

Despite my protest, I was lifted up by Mike, and he began his work of securing the parachute, and securing my body to his. That’s when I saw the hooks. Simple, metal clasp hooks — two of them attached to a nylon belt that wrapped around Mike’s back, across his waist, and then around my waist. That’s it. A simple hook that could break, give out, or accidentally become unfastened. And the parachute, of course, is on his back; not mine. I guess I had never really thought about this before, but I had assumed that we would be more securely attached. Maybe I had envisioned something sturdier — I couldn’t think of what — but I felt extremely vulnerable. When I heard the clasp click shut, I looked over and down to check them, and my stomach lurched. “Oh, God… what have I done?”

So I asked Mike, “If these clasps break, can I just wrap my legs around yours, pretzel-like, and still stay attached for the fall?” “No way, he laughed, “the force is too great.” Poor Mike. His comment elicited fear, and a knee jerk reaction. But first, the door of the plane opened, and my crazy boyfriend and his master jumper jumped out and disappeared. Our turn. Fear had already made my legs nothing less than concrete. Mike, as a master jumper, had evidently seen this reaction before. He was undaunted, as he moved me closer to the door, tightened our straps, and exited the plane; me attached. I kicked, in an attempt to wrap my legs around his, pretzel-style, just in case he was wrong about the force. I hurt Mike; I made his shin bleed… even through his fancy, sturdy parachute jumpsuit.

Mike was a nice, decent guy, just trying to help people out. I regret hurting Mike. And still, I don’t think I said I was sorry.

Now, I know what Mike knew: the only cure for my stomach’s anxiety, my wildly-beating heart, and my fear, was to get out of that plane and out into the fresh air. I do not use the word “fresh” here lightly. The air smells fresher up there. Still, as the air hit my face, and all I could see was the ground rushing up fast to meet me, I could … barely…. breathe. Thankfully, for Mike, I couldn’t move either; so he was safe from any future injury.

Once the cord was pulled, I think we went straight back up in the air higher briefly, before beginning to fall, slowly. By now, I was really enjoying the pristine, crisp cold air; the air smelled better than the freshest spring day you’ve ever known. And this feeling of buoyancy was nothing like I had ever felt before. In a word; breathtaking. The view, unhindered by tiny airplane windows and wing, is unlike anything you will ever experience when your feet are firmly planted on the ground.

Then, I think I had one of those epiphany moments; where I felt “one” with the universe, so grateful that I had experienced the earth from this vantage point. This “jumper’s high” is what keeps the skydiving sports so popular, as jumpers keep going back for more. I interviewed an astronaut once for a business client, and he confessed: “Astronauts do go through depression when they come back to earth; it’s hard to leave space, and once they knew the lightness of space. It’s very hard to live within the Earth’s pull of gravity, once you know the freedom of space.”

When I landed, light as a feather, I was never so happy to be back on earth. 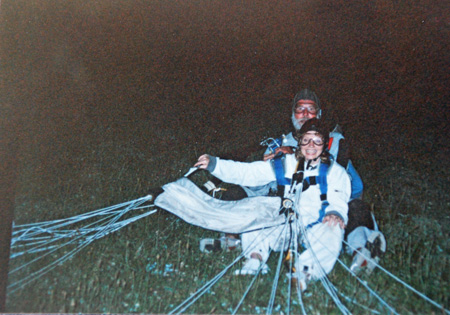 I felt like I had been gone for months. When I called my Mom to tell her what I had done, she was mad at me, for not telling her before I left. She wanted the privilege of worrying about me all day. Logic only a mother can understand.

A few months later, Mike showed up in the newspaper. There was some accident, a fault with the parachute. Mike was the hero in the story. As the master jumper that he is, he maneuvered his body around during the tandem jump, so that the novice jumper fell on top of him, and Mike’s body took the full brunt of the fall. In the picture, he was sitting on the ground, after the fall, still smiling, miraculously suffering from only a broken leg from the incredible fall. Mike was a good man.

Rain Forest Certified
I...
It's Time To Break The Shroud Of Secrecy on Women's Health
...
Help! I Can't Keep my Houseplants Alive!
...
When a monster shows up in your picture book
T...
Savoring One Book From Start to its Long, Long Finish
I...
The snow comes in waves
T...
Share on FacebookShare on Twitter
Laugh, Life, sunday scribblings
27 comments to “Free falling like a feather”