It may have looked as if I was trying to win him over through his stomach, those few days before Thanksgiving, when I was buying ready-made foods (like Bosco sticks and frozen chicken won tons, sourdough frozen pretzels, chunky applesauce (cinnamon)) but I wasn’t. I was just thinking, and worried about standing in the kitchen all day preparing meals that just couldn’t come out of the oven fast enough, while my son, who hasn’t been home in maybe 6 weeks, would be hungry. So, I was just trying to be prepared.

But of course, his brothers teased me and said, so, I see how it is. He comes home, starts to relax, pulls out the chunky applesauce, and decides… “I think I’ll stay.”

The food did the trick… I had plenty of food ready at the last minute, just when I needed it to fill in the gaps. One of my genius meals was taking a leftover roast beef, and shredding it in the food processor, which had just minutes before, been filled with mini orange and red peppers, salt and mayonnaise to spread on an entire package of Hawaiian bread mini buns, and then topped with the shredded beef and provolone cheese. (Just remembered that I forgot the onions) These sandwiches were a great fast meal, while cleaning out the fridge a bit.

The other genius meal was to boil (home made) beef broth cubes from the freezer, add the chicken won tons, along with some shredded cabbage and soy sauce… yum… I could have eaten bowls of that one all day long.

The turkey and stuffing made little impact…none of us were that excited about the traditional trimmings… I’m wondering what to make for Christmas. It seems like we’re the happiest eating rich Italian foods, with cheese and sauces… maybe Pizza is all we need?

The pies were over the top. We all love pies. I made pecan, the lemon icebox pie, peach (Rosie got half of that one) and pumpkin from a pie. And I even broke down and bought actual Cool Whip instead of whipping up real cream from heavy whipping cream. The boys were so happy about that one. Go figure…

I should have, but didn’t make a black raspberry pie, in remembrance of summer… but I honestly was worn out. I’m learning to just say no to those little voices in my head. Of course, I had writing deadlines that loomed over my head all weekend, thinking I could find a few moments to steal away and get some work done, and it never happened. So this week, I’m playing catch-up. 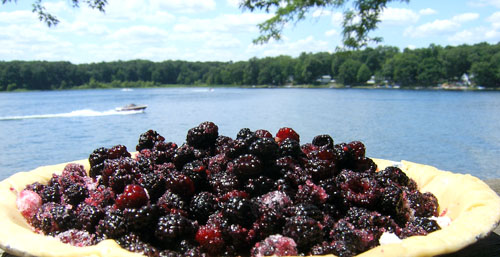 But, alas, the food really didn’t do that one trick that maybe I was hoping would work, subliminally. The boy packed his laundry up and left to go back to his “home.” So, he has a great job, a cool apartment, nice roommates. What else should a mom hope for?