Remember the Mad Science Parties? Nobody has them anymore. The problem was, as I remember them, the kids were all sitting down during those mad science demonstrations. As if they were in a classroom. Only if you raised and waved your hand high enough were you “chosen” to join the stage to be an assistant to the scientist. IÂ also remember the tension and stress hanging in the airÂ — the scientists were nervous about keeping the kids in their seats, hoping the cloud of colored dry ice and the fizz of baking soda and vinegar would be enough to hold them in their seats, just long enough to get through the experiments.

This didn’t last, and now there are no Mad Science parties. But Liz Lee Heinecke has put the “science” back into the hands of the kids again, where it belongs. You can find her experients over at Kitchen Pantry Scientist, or you can keep her book, Kitchen Science Lab for Kids: 52 Family Friendly Experiments from Around the House (Hands-On Family)

,Â right in your kitchen, so the kids can see for themselves which experiment they want to do next.

Â So, we pulled out her book for our birthday party last weekend, and adopted a few of the experiments to keep a group of 11 year old boys busy — without video games, and without expensive bouncy tents, or screens of any kind.

The highlight of the afternoon was the exploding pumpkins, valcano pumpkins, actually, with various colors of vinegar poured over carved mini-pumpkins stuffed with baking soda. 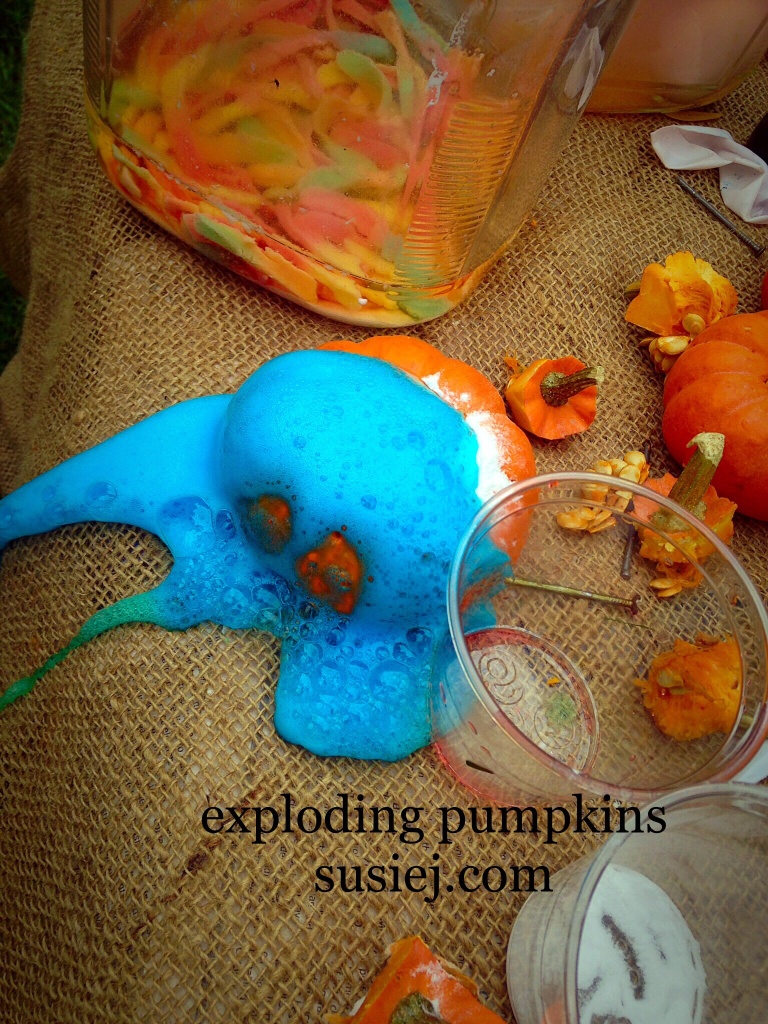 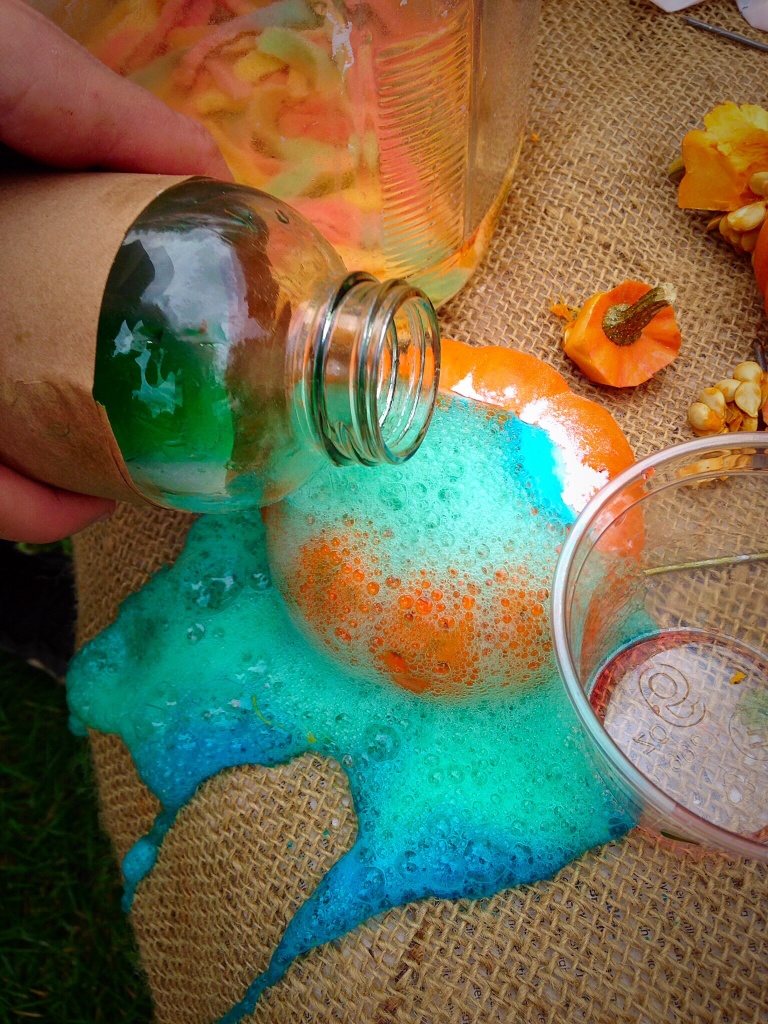 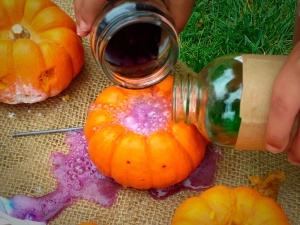 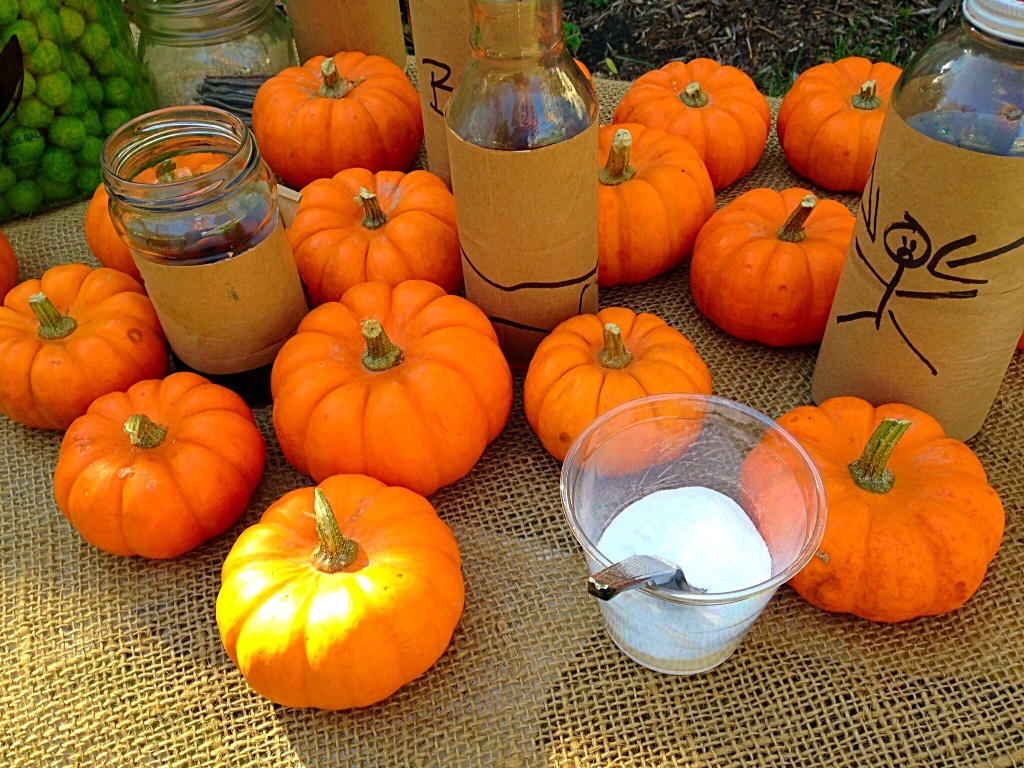 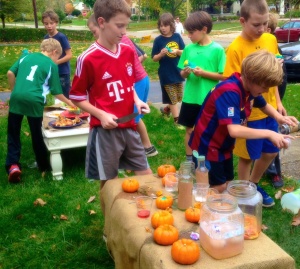 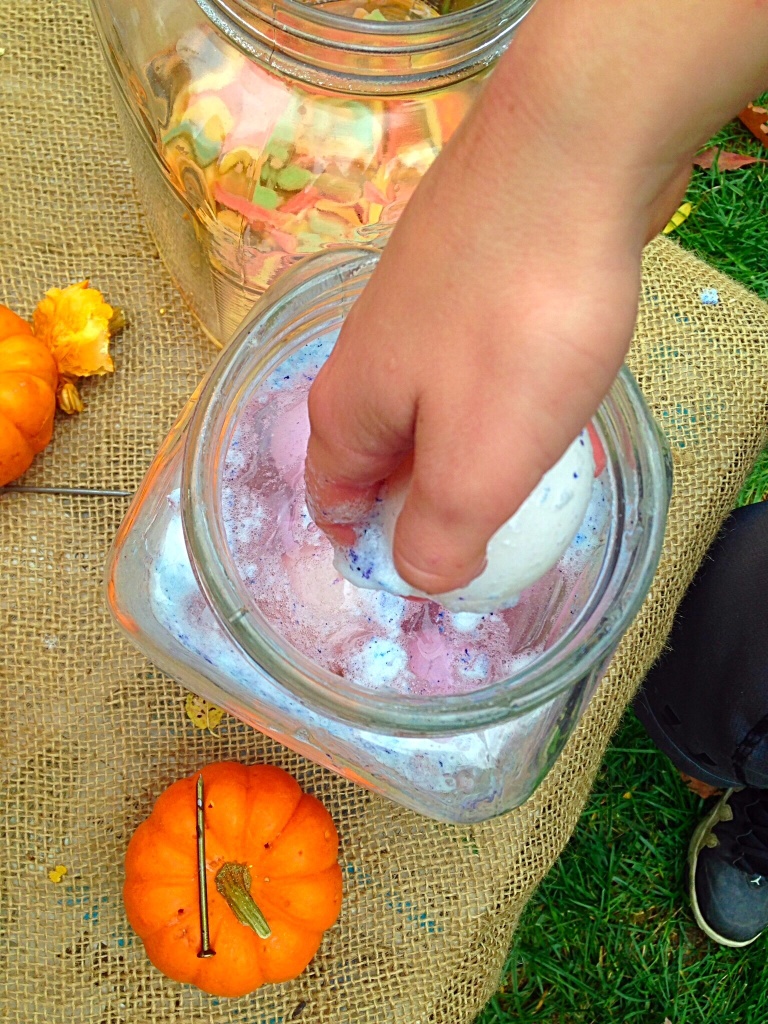 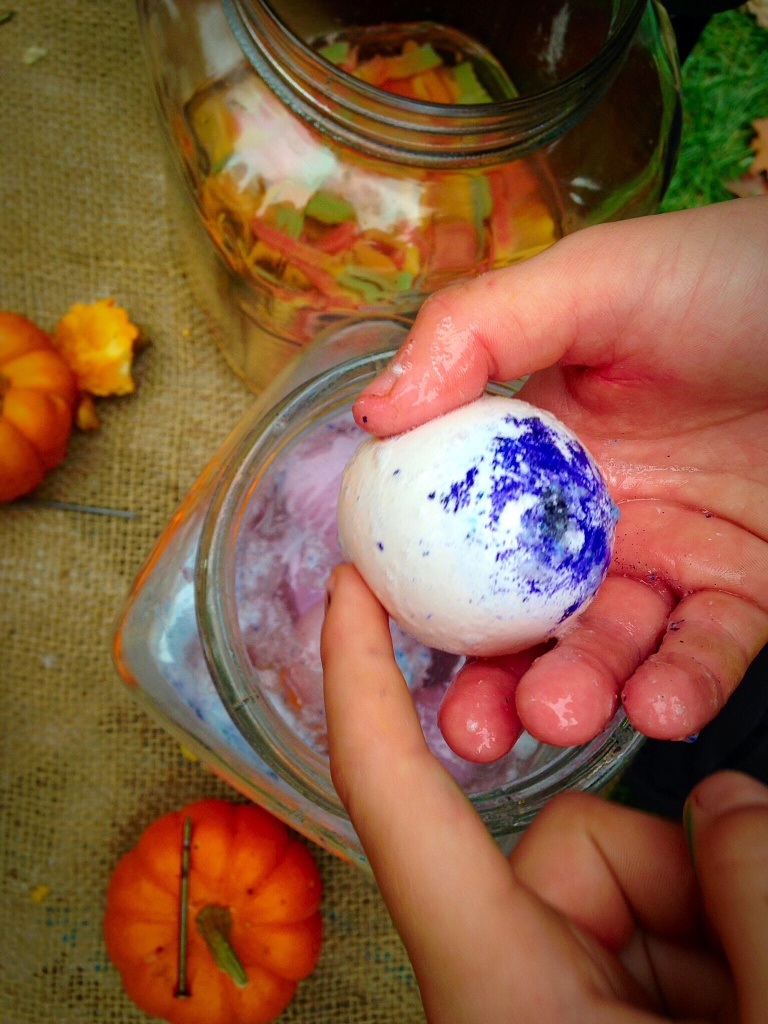 This kickball game left them sweaty, and craving the punch bowl filled with the skeleton hand (a powder-free surgical glove filled with water and frozen. The glove was removed ((cutting and tearing)) before adding it to the punch bowl). 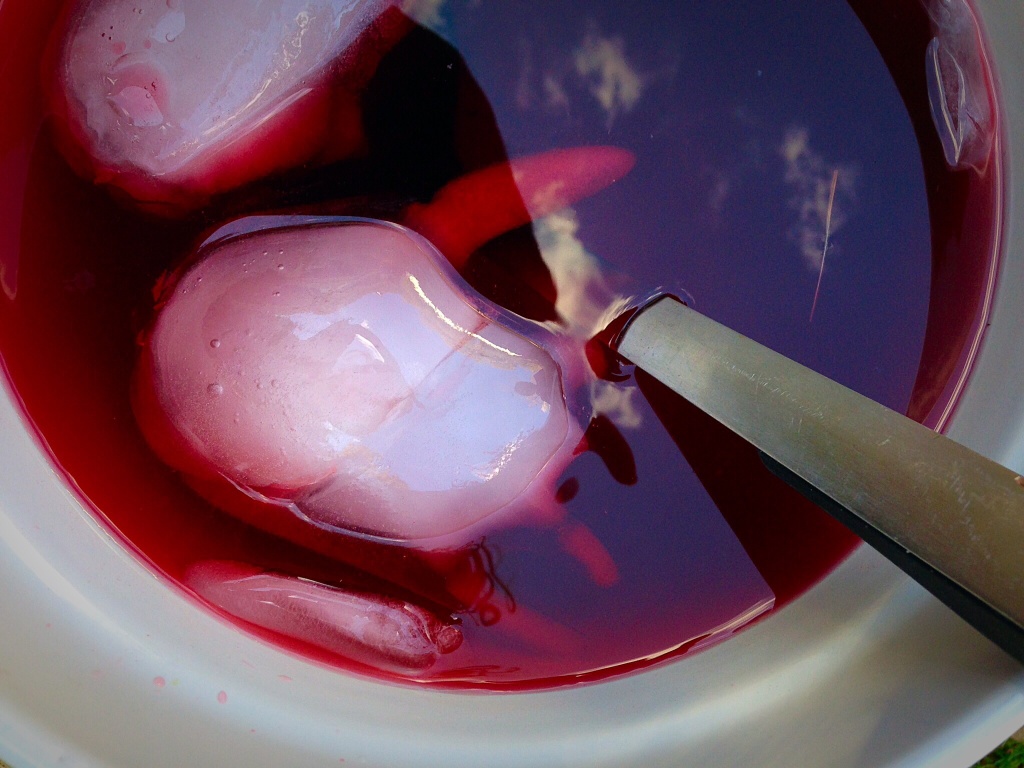 While they snacked on the anatomically-correct vegetable skeleton. 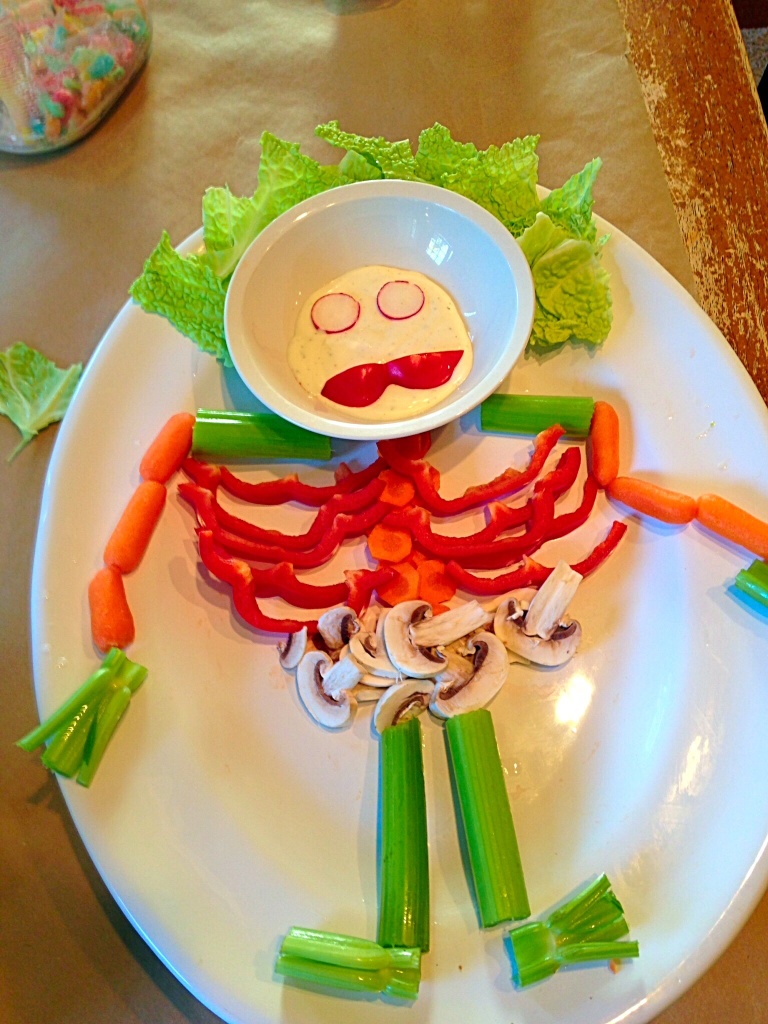 Today's Milestone
B...
And they covered every available surface
H...
Point of No Return
T...
I Don't Like Raisins Baked In Cakes Either
L...
Cooking and Freezing Morel Mushrooms
S...
Waiting for the laundry
...
Share on FacebookShare on Twitter
birthday, clean, Life, reviews, Try This
One comment to “Exploding Pumpkins at the Kitchen Science Lab Birthday Party”