Developments in my slalom trials were prudently delayed because of that Boa Constrictor that squeezed my back. With the pain now only a slight memory, I was ready to think about the possibility of meeting my slalom goal. All morning, I watched once-a-year-skiers do it all wrong – leaning forward, rather than back. My coaches took one look at that and said, “That person is going to have a hard time walking tomorrow.”

Suddenly, the fine art of skiing seemed to fall into place. Just pull on the rope, lean back, keep your knees bent, and you’re good to go. And that is exactly what I did, time and time again… on the solid surface of our recently stained deck, (yeah, you missed that again this year too… we stained it again last week) as I paid close attention to my very-able coaches. I definitely had this skiing thing down. Just like this Best Shot of a man who helped train me. 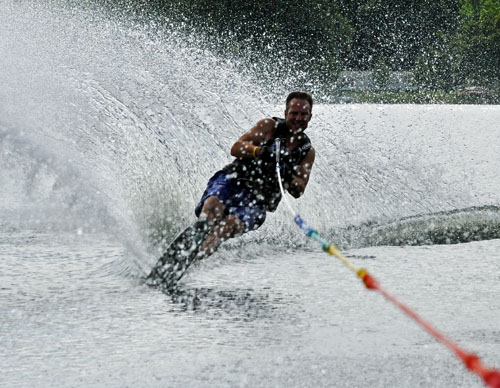 Dry land, it turns out, does little to prepare you for water. Apparently.

But, I didn’t know that yet. With so much training under my belt, I decided to practice my new-found skills in the water. Probably, I should have heeded the warning plastered on the back of both of my ski bindings, something about “experienced riders”; but I did no such thing. Probably, I shouldn’t have gone into the water with so much confidence; I probably should have taken more of those coaches along for the ride.

Instead, I worked alone. I pulled on the ropes, stood up, bent my knees and leaned waaaaaay back. Evidently, according to the directives being yelled from the boat, I wasn’t leaning back quite far enough, so I leaned back more. In less than one second after that, I was horizontal, and lake water was making its way through my sinuses. Plus, my hair got wet; which completely irritated me. Of course, this continued to happen again and again, at least two or three more times.

I tried again. I mean, I really tried. I pulled hard, I tried to find that sweet-spot I found on dry land – the place between leaning back and crashing. I worked to stay steady while waves thrashed around me on both sides of my skis – and I didn’t fall. I was completely sure my form was perfect; as my arms and legs hurt in a way they never hurt the other times I tried to ski. It was impossible for me to learn back further without falling. My heart beat wildly, as if I were running a marathon, even though all I was doing was standing up behind a boat. Finally, I hit gold. Or so I thought.

But according to several eyewitnesses, I was mistaken. People, including my own children, said, “next time, try leaning back.” The nerve.

It did occur to me at that point that perhaps the reason I cannot slalom is precisely because I cannot ski.

Still, I continue to be shocked by my spectators responses, because I checked; I was leaning back. But, just in case I did look like that once-a-year-skier who “won’t be able to walk tomorrow,” I popped three ibuprofens just as soon as I hit dry land – just to be safe.

13 Best Kid Quotes
W...
Chaos
A...
We Can Skip Class When It Snows, And Wear Slippers Inside
I...
Scientific Proof That Santa Does Exist
H...
A Big Grand Chalkboard to Run My Life
I...
What The Years Have Done
C...
Share on FacebookShare on Twitter
best shot, Laugh, the lake house
4 comments to “Exactly how I do not look when I ski”