There were tears on our last day of skiing on the Steamboat Mountain. The sun was peering out of the clouds by the time we buckled our bindings while we road the Gondola to the top of the mountain. Dad and the older boys already had an hour of skiing on the little boys and me by the time we made it to the mountain. The three of us, our first venture on the slopes alone, after kind training by our friend,Â  had painstakingly carved out route for the day — committed it to memory. The boys each picked a run, and I picked one. We planned to take some of our favorite blues, including Tomahawk and Baby Powder, and taking a couple of new routes down like High Noon, 1 o’clock and ending with Vagabond. 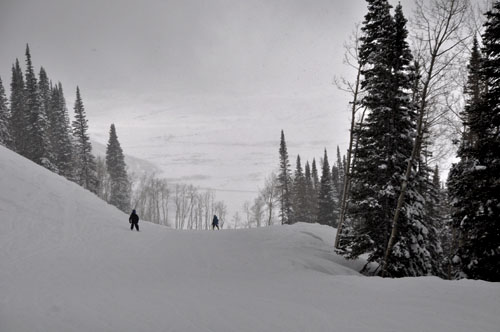 Mother Nature had other plans. Once we made it to the top of the mountain, and headed for Baby Powder, which is on the upper most outside wall of the mountain, a storm kicked up. The wind was whipping ice droplets (very hard snowflakes) against my face mask so hard that I thought my skin would be raw. The wind was so strong that I felt I was being propelled by its force down the mountain, sometimes to the left in a direction I didn’t want to go. Our vision was impaired, and there were whiteouts that lasted for just a few seconds, but enough to send some tears down my little guy’s face. 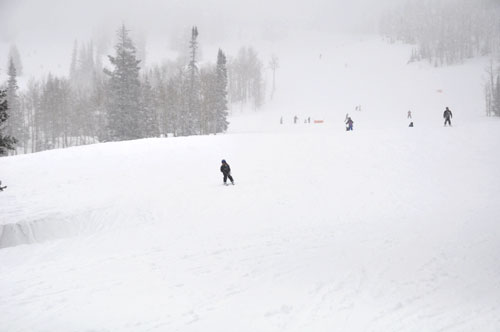 He wanted to stop. Except, there was no place to go, except down. Immediately, I decided we would ski over to the Gondola, the only way down the mountain without skiing. Except, we still had to ski over and across from Baby Powder to get to the Gondola. We had miles to go before we could sleep.

I urged the boys on, saying “the faster we ski, the quicker we’ll get to the gondola.”Â  The wind was our enemy. I felt so helpless… here was this little guy crying, and we had no place to go. So, I encouraged him on. I kept the boys in front of me so I could keep my eye on them. At one point, I came around a curve, and only saw one. “Where’s your brother?” Oh, he went up ahead, was the response. I turned, and saw just to my left the little guy dumped in a tree well. He was stuck, and he couldn’t get up. 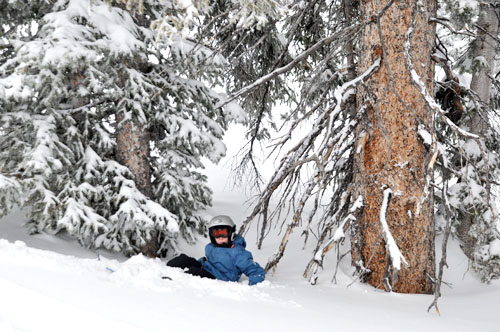 Forgive me… but I had my camera. So, what else was I supposed to do at that moment? Let the Kodak moment pass? I couldn’t. So, I snapped a shot of a very grumpy face, who retorted with the words, “What the heck are you doing?! Get me out of here!”

And, that’s exactly what I did. Except, I couldn’t reach him. He couldn’t even reach my pole, and I was afraid that perhaps if I got to close to him, I would tumble down into the tree well with him. So, I asked him to take of his ski and walk out.

And that’s when it happened. He took of his glove. Instantly, the baby powder snow was flying everywhere, over his hand, and inside of his glove. Now his glove was wet. And cold. An angel must have been fluttering above in the snow flakes, because, somehow I managed to get over close enough to him so that he could reach my pole, without me falling down with him. Soon, we were on our way… wet glove and all. 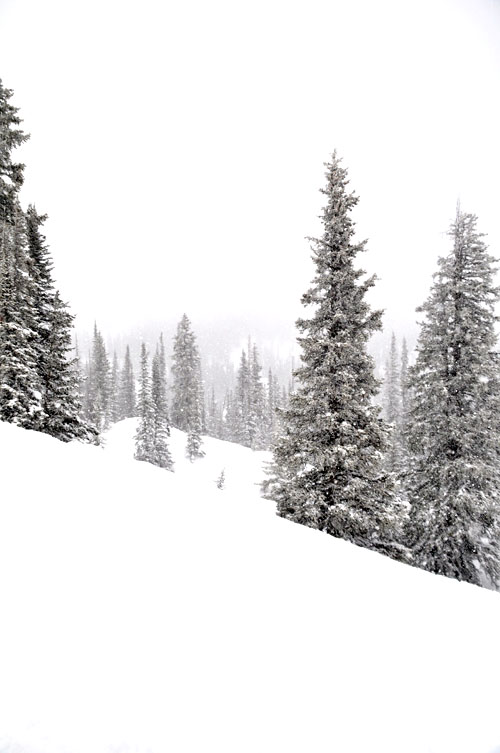 We kept trudging along. Tears came and went. “Do you want some cheese with that whine,”Â  I found myself saying. Over the mountains and through the hills. When we arrived at the SouthPeak Lift, we jumped on it… and then we skied down Broadway over to —what we thought would be the Gondola… but no… we still had to ride the Elkhead lift. My little guy took one look at that lift, and he started to cry. “I don’t want to go any HIGHER!” I know sweeties, but that’s the only way down.

Then, he had a major meltdown… and said, “But then, we still have to get on the Gondola, and then, we have to walk all the way to the shuttle carrying our skis, and then we have to climb three flights of stairs to our condo carrying our skis!” His brother and I just looked at him and laughed… under our breath.What else could we do? We were stranded on a mountain. The only way out was to keep moving. 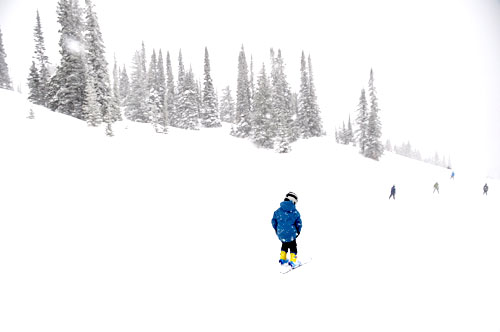 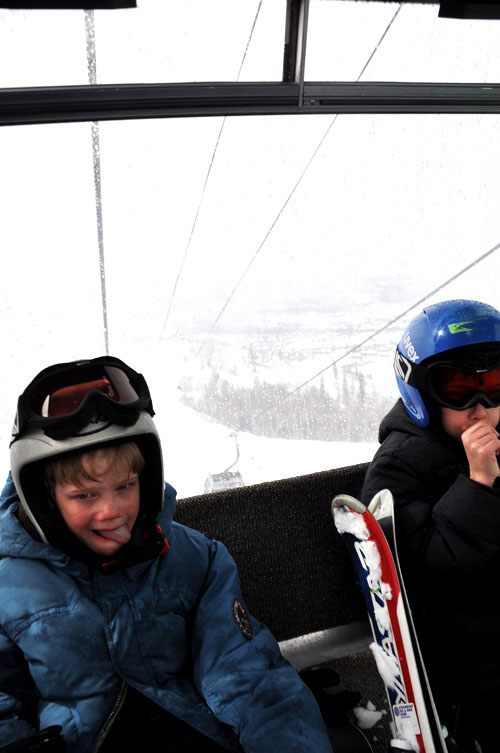 Once inside the Gondola, they ripped off their gloves and and asked me to warm their hands. They were happy when the shuttle reached the condo, and I suddenly remembered this was the day to return the skis. No need to carry them all the way up the 3 flights of stairs, when they simply needed to go back inside the van. With smiles, we loaded them into the van and walked, without burdens, up the 3 flights of stairs and made some microwave popcorn.

Words of Wisdom
T...
Art Migration
T...
The Gift One Cold, Rainy Day Brought
I...
Transcendence Leaves Us With Just Enough
...
It's Been That Kind of Winter
A...
More fun than Christmas
I...
Share on FacebookShare on Twitter
clean, Laugh
2 comments to “We Had Hoped to End With Vagabond”