More details about my mysterious silent retreat… from my newspaper column.

When I embarked on my one-week silent retreat, I knew there would be plenty of time for yoga, reading and contemplation. Meals, reduced to the sacred ritual that they truly are, were to be taken slowly and mindfully, savoring every morsel. I know your mind has already conjured up images of tofu, quinoa and passion fruit, because those were the same images dancing in my head too as I carried my bags to my gorgeous bay-windowed room with a fireplace. So you can imagine my surprise when they revealed the room’s “pantry” complete with refrigerator, toaster and microwave, with its stash of Fruit Loops, White-flour English Muffins and real margarine. Sure, there was a token basket of fresh fruit in a linen-lined basket with a paring knife, but to a girl, alone, who had just turned her cell phone over, the Fruit Loops proved to be an overwhelming temptation. 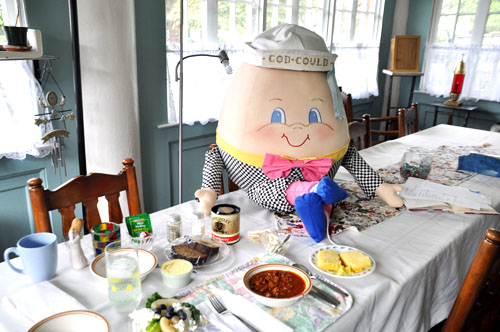 In the retreat’s silence, I learned to follow the rhythm of the house, detecting the scents of lunch and dinner being prepared a couple of hours before I would eat, and the peal of the grandfather clock standing in the downstairs entrance chiming 12 times, and again 5 times, signaling that food was waiting for me.

Each meal had a token plate of stacked white bread, with a side of margarine, never butter. There were two exceptions – the night my plate was laden with spaghetti and meatballs, the white bread was replaced with white Italian bread. Beside this carb was a curious little jar of a clear yellowish liquid, “what could that be?” I little taste revealed it was the palest looking olive oil I have ever seen, to be used as dipping oil. Or was it perhaps, canola oil? And the cheese? The shavings were poured into a glass bowl with a spoon, and came from a green can, rather than a grater.

On the second occasion, I found my heart leaping at what would be considered in some parts of the world, pita bread, along with a huge lump of hummus and red pepper dip. Even then my hopes were dashed, as I soon found the hummus was definitely laced with mayonnaise. That night, the Fruit Loops were a welcome midnight snack.

Yet, I was under extreme pressure to clean my plate, as I was acutely aware that my spiritual director, someone honored, created each meal for me. How could I hurt her feelings? That mushy, smelly plate of grayish-green broccoli turned out not to be so horrid after all.

When my spiritual director was called away on an emergency, a surrogate director prepared my meal. Even though he was “all thumbs” in the kitchen, his cornbread was light and delicate, and sweet. I later learned that he tried to mix the cornmeal, egg and milk all together in the baking pan. “Please tell him how good the cornbread was,” I told them.

When he offered me a Klondike Bar for dessert, I almost declined, as I have never had a fondness for icy sweets. I found myself saying, “Yes, sure, I’ll take a Klondike bar,” with enthusiasm.
He looked so relieved, as he placed the bar on the table. I then realized, what a gift I had given him. He had no idea what in the world to give me for desert, and heaven forbid, I would ask him to bake me a cookie, which, I’m sure he would have, if I had asked.

There's Been No Skinny Dippin'
T...
The Batman
&...
Butter Knives and Cream
T...
The Tree Where I Wrote the Hugh Blair Award Paper
T...
The Best Place to Hide Presents
...
Point of No Return
T...
Share on FacebookShare on Twitter
column, Laugh