No matter where you might be right now, it’s likely there is some kind of weather to talk about. Here, it’s like we are living in a Mariah Mundi novel, where we are covered in a gray fog of cold, and we aren’t sure where the night begins or the morning starts. And it doesn’t help that the boys find themselves hungry as wolves at 10:30 pm, so they cook, and then have enough energy to play another round of a game, and are up till 2 in the morning.

This afternoon, while I was chopping vegetables for this stew, I heard them all bickering over a game — as if they were still in elementary school, and we were huddledÂ in together for a hot register day.Â That was a moment of pure bliss — to haveÂ a moment in time captured and handed back to me. I had to pinch myself.Â

The stew had to satisfy a wide variety of palatesÂ — a portion with barley, beans, and alphabet noodles. I accomplished this by creating the stew base, and adding ramekins layered on top, filled with individual portions of barley, beans and noodles. 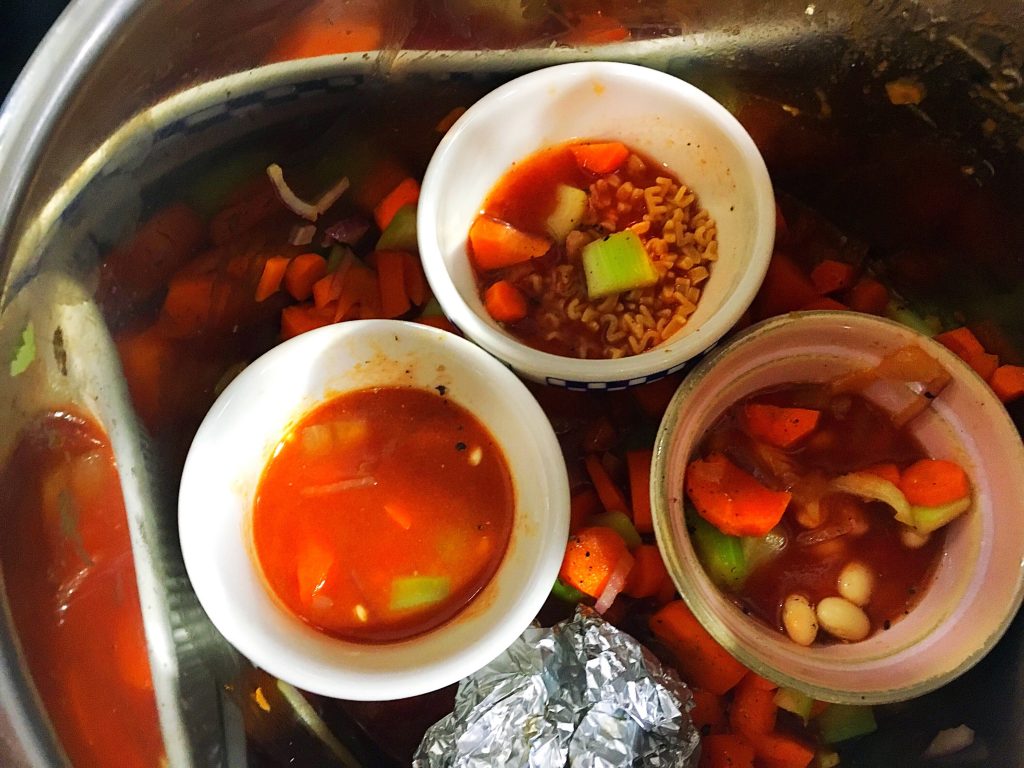 The whole production worked out better than I expected.

The entertainment consists of learning a slew of new games — and we’ve used the term “Practice round” more times than I can count.

I bought Betrayal as an afterthought on New Year’s Eve, after searching on my phone for the highly recommended (by one son who plays it at school) Avalon at Target.

Avalon wasn’t available, but the recommendations pointed me toÂ  Betrayal. So,Â I checked and saw that there were four copies left in the store.

When I arrived, I found the whole game section at Target filled with 20-somethings standing around pursuing the dwindling games section shelves. Unlike what the website said, there was only one copy of Betrayal — and it was wedged way back on the shelf– and the box still carries the scars of the metal shelf above, as I tried to pry the game free.

This morning, I learned that about the “Dog Party” that occurred at 2 am while I was sleeping –Â  they came home after midnight and discovered that Rosie got into the trash — and decided to not let her get away with it. While Rosie hid upstairs, and wouldn’t own up to what she did, the boys put the leash on her and tried to get her down the stairs. She refused to budge– she was so ashamed of herself. So, then, they got her crate and moved it to the kitchen, so that there was no way she could avoid the calamity she made.

Glad I was able to sleep through the whole thing…

Even though it’sÂ bitter cold, and the sun,Â even when it shines, seems to be clothed in some dark, inky-milkyÂ lens, I would be fine keeping things just as they are — indefinitely. Warm soups, mugs of hot tea, late nightÂ animal shenanigans,Â and board games to keep the mind sharp could sustain me for a lifetime.Â  Instead, theÂ reality of one leaving to head back to college, and the boys starting the rat race of school is inevitable.

The One-Pot, 20 Minute, College Meal
T...
Today's Milestone
B...
Lost Steps to the Line Dance
A...
It's Finals Week At College
S...
What To do When The Bomb Threats Keep Coming
L...
Loser's Trophy
T...
clean, Household, Laugh, Life, memories