The taste of a fried green tomato is delectable; but still, the taste is as difficult to describe as aÂ goodÂ Morel Mushroom. You just have to try them for yourself.Â  I will say that they do not taste like tomatoes. Even though I’ve been eating them since I was four years old, I’m always surprised each August when I take a bite of a fried green tomato; the memory of that taste seems to fade asÂ quickly as the summer heat. Eating one is like taking a trip to a foreign exotic land, and sampling their strange and exotic food. 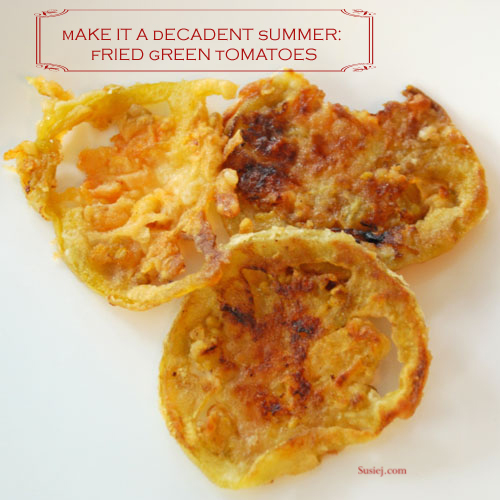 Now that my Grandma has passed, if I want a plate of fried green tomatoes, I’ll have to fry them myself. Unfortunately, when I fry them, the servingÂ plate never gets full enough to share with others, because I eat them as fast as they cook. So now that August is here, and tomato vines everywhere are bursting with green tomatoes (you can even find them in the produce section at Kroger), pick some and fry them.

When you’re looking for green tomatoes, pick the ones that have a blush of red– they taste the best. 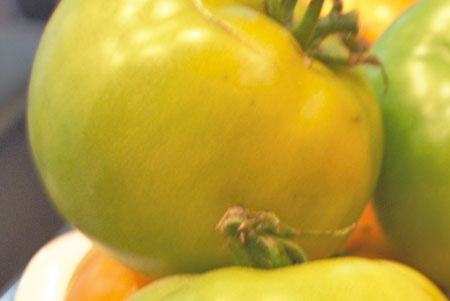 Next, slice them as thin as you can. You don’t want them paper thin… but almost.

Next, figure out which pan you’ll use. A cast iron skillet is perfect… but may not be large enough if you’re inviting me.

Mix up your breading:

They almost look as good as snickerdoodles.

What you do with leftover eggwhites
I...
13 Fixes for Tired Moms
A...
The Preeminent Dessert/Appetizer
I...
Flaxseed Crackers: You Can Do This At Home
H...
Tomato: Roasted
T...
Everything Except The Eggs
I...
Share on FacebookShare on Twitter
Eat
7 comments to “Don’t trust me with the fried green tomatoes”