We were at the closing ceremonies for the third annualÂ Pelotonia, where 4,986 cyclists from 38â€‰states ride 180-miles and 100 percent of the funds go directly to the Arthur G. James Cancer Hospital. (Donate here…. and add to the almost $9 million given so far). My son called. “Mom?” he said?

“In between commercials, they said there was a deadly disease at Pelotonia.”

Before I hung up the phone, I repeated the words to everyone standing around me, as a question. “Deadly disease at Pelotonia?!”

Quicker than lightning, phones were pulled out and search terms were entered…”we don’t see anything about a disease…”

“Maybe it’s from those raw hambugers…”

“I did borrow someone’s towel.”

We looked around, and didn’t see anyone noticeably sick… or dying… but we did see some who looked like they wanted to die…probably from riding 100 miles of hills.

I called my son back, and said, “We’re fine… there’s no deadly disease and nothing to worry about.”

So, we grabbed another beer… and then it hit me.

“There is a deadly disease at Pelotonia… It’s called cancer… and it’s why we’re riding today.” 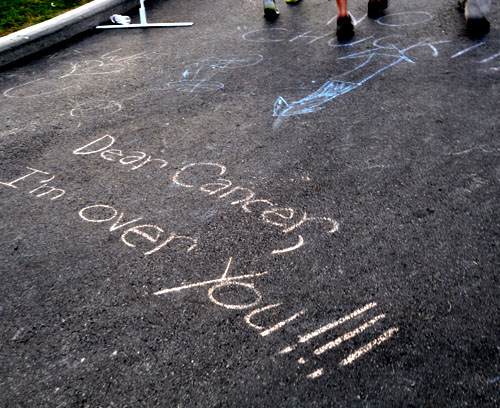 Exploding Pumpkins at the Kitchen Science Lab Birthday Party
R...
I Am From... The Cold
I...
Food. It's All About the Food
I...
Tender Spots In Urgent Care
H...
And then, labor became my friend that brought me babies
...
You Could Put Me To Sleep Like Rip Van Winkle
N...
Share on FacebookShare on Twitter
clean, humanitarian, Laugh