I’m so forgetful and I loose my lists. I find bits of scrap paper everywhere with lists I no longer need, and never the one I do need. I wanted a big place to record jobs, (water the Buckeye tree — it’s dying!) and lists (don’t forget laundry detergent) at the lake.

A chalkboard, big and grand, with lots of space to spill out my ideas, would be perfect place to collect my thoughts where I could plainly see them. I asked all the neighbors, and anyone who walked by, for their opinion on where I should paint my chalkboard. Because what would be worse than putting it in the wrong space, and then having to paint over it all again?

When I gathered enough input on location and proportion and finally decided, I taped off the spot and “lived with it for a few days.” The chalky black paint can was opened and slapped on the wall… no drips. Once done, I was a bit horrified. The spot was too black, too dark, and definitely cut up the wall. In less than an hour, I erased my mistake and had already primed the wall. The next day, Dover White was back on the spot. In essence, I did the very thing I planned NOT to do.

A few days later, I found the remains of an old wooden mirror frame. The mirror was long gone and broken, and it was taking up space. 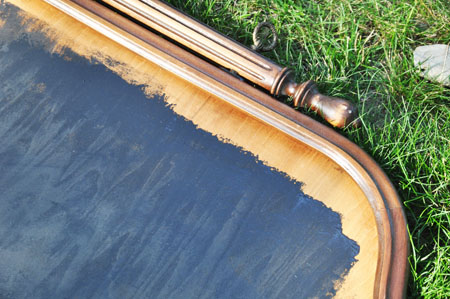 So, we washed it.

I opened the can of paint one more time and slapped it on. 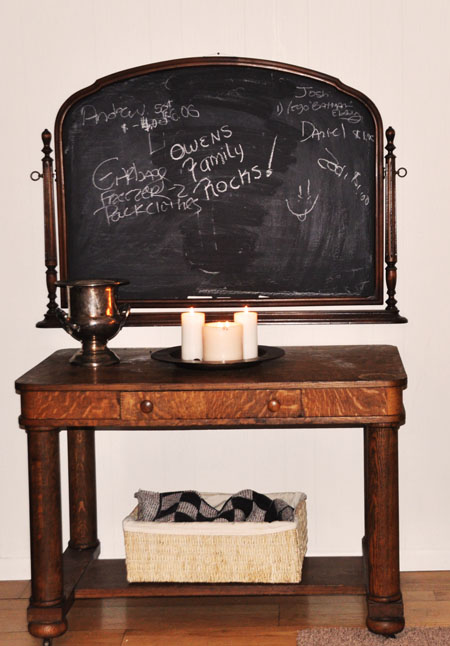 It was almost finding a new piece of furniture… and the wood gives the black a nice break. Not too overpowering… perfect.

Although, the kids are having more fun with the blackboard than I am.

Wine Country Wall Art
H...
There Was a Bit of Fog This Morning
...
Fast, New Yummy Way to Cook Steak!
O...
For Our Next Nature Lesson
F...
When you think "that" was someone else, you are healing
J...
Rosie
Share on FacebookShare on Twitter
Make Something, the lake house, Try This
3 comments to “A Big Grand Chalkboard to Run My Life”