Your spine tingles when you hear a group of people cheer for you across a large body of water droplets. Those cheers of camaraderie solidify the friendships we’ve deepened over the summer; and validate that in many ways, the victories wouldn’t have happened without the words, work and encouragement of those friends.

The first time I heard such cheers came on Sunday afternoon, when I doubled-skied with a girlfriend. Neither one of us is a great skier, but we can get up on two skis – but could we do it at the same time? All summer, over glasses of wine, we’d say, “we’re going to double ski this summer and wave at everyone on the lake,” until one day our words put us smack dab in the water together, side by side, behind a boat while our husbands checked to make sure the ropes were the same length. 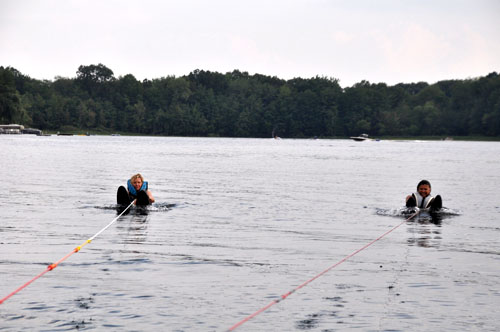 The crowd of sons and friends was beginning to form on the porch, and we looked at each other and said, “Why are we doing this?” She said, “I don’t know.” Then, she said, “we have to get up… look at all those people watching.” One rope was too long, and while the men worked, we said the inevitable “We’re ready,” and off we went… both of us at the same time. The people on the porch cheered, and we laughed. 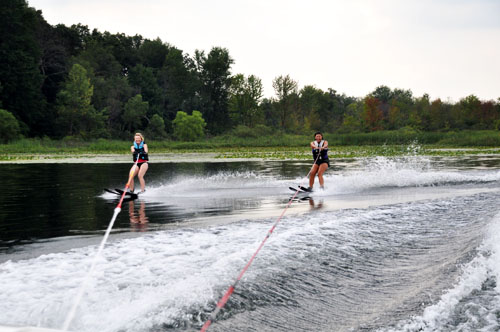 She is a much better waver than me… my fingers were always too busy gingerly grabbing the rope handle to let go long enough for a good parade-style wave like hers. We talked and laughed all the way across the wake, and tried to give each other a high-five. After one lap, I looked for our people on the porch to give them a good wave, only to see that they were already gone… 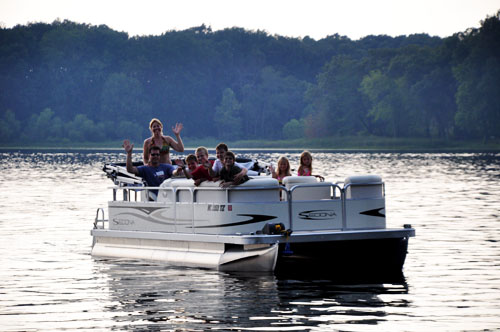 because they had all jumped onto a pontoon boat so they could get good pictures, and cheer. This picture was taken after the ski run… because everyone was so busy taking pictures of us, that no one took this one.

I couldn’t help but notice that skiing was starting to feel “comfortable,” rather than life threatening. Plus, there was no pain, and the “weird walking-on-water sport” was becoming effortless, and FUN. That terrified panic I felt standing behind a boat was long gone. Instead of allowing the boat to pull me at its will, I was deciding where I would go and when… the right side of the wake was my favorite, and I noticed that my left leg was the strongest when it came to moving across the wake.

Now might be time to lift one leg and find out what it felt like to slalom. “All you need is some clear water,” they said. So, I ventured out, on Monday morning, to join the 10 a.m. Ski Club – this is where the pristine waters thrive. Just after the fishing boats leave, just before the tubers have rolled out of bed, and the “wake” is officially opened on the lake. The slalom skiers are out there every morning, driving the boat slowly across the water (so as not to make a wake) at ten till ten, sitting in position and ready for the first skier to cut through the glass-like water at 10 on the dot.

That morning there were four slalom skiers. Each skier went up and down the lake one time, at least 30 mph, creating a great wall of spray that went well above their heads. 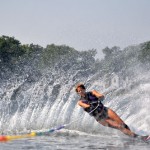 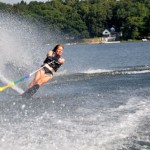 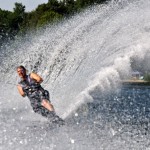 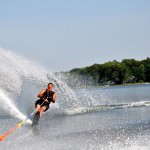 They are so amazing. But, I told myself, “All you’re going to do is get up… and maybe try to balance and then fall… and you’ve got great coaches in the boat to help you get there.”

On my turn, I went to the right side of the wake, lifted up one leg, and to my surprise did not fall. “Now, to get this ski off my foot…” I struggled to get my foot out, looked down, and immediately fell flat on my face. The pros in the boat laughed and said, “You could of told us you were going to slalom this time.” Except, I didn’t know I was going to do that until then.

Second time, they made the bindings looser… and then, I made them even looser. I wondered if I could get up with that big ski flapping all over my right foot, but I did. As soon as I was settled on the right side of the wake, off went the ski, and away I went. I dared to breathe, and let out a cheer… and I still didn’t fall. 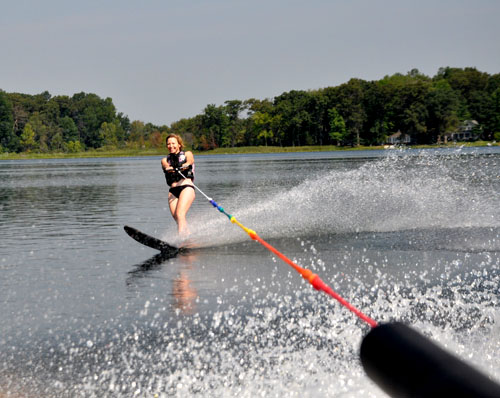 The boat cheered, and I laughed, and still didn’t fall. OK, so, I was only going 20 mph to their 30s. Yet, I could not in a million years believe this was happening. Until we hit a turn, and down I came. But that half-lake slalom run was enough to earn my glass of champagne on a Monday morning. 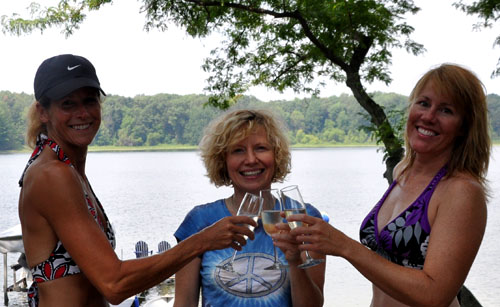 I still can’t believe this happened. Thanks for all the coaching.

Speechless in Adolescence
A...
Confession: I'm Raising Mosquitos
S...
When I Say Picky, I Mean Picky
S...
Motivating Him to Keep Reading
...
We Waited Until the Late Afternoon
w...
Snow Shorts
T...
Laugh, the lake house
6 comments to “Champagne on a Monday Morning”